* Read SA Coin’s explanation to Moneyweb of growth figures listed on its website, and listen to the interview here.

JOHANNESBURG – Was the purchase of a graded, rare R5 Mandela coin a sound investment?

This is the question on a Moneyweb reader’s mind after she purchased a graded Year 2000 Mandela R5 coin (displayed below) in 2007 for R19 500 after being told that it would appreciate in value relatively quickly. 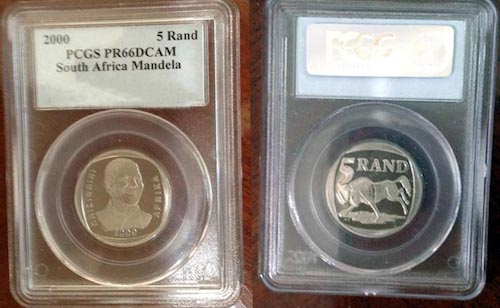 (PCGS stands for Professional Coin Grading Services, one of three grading companies recognised worldwide. It is a Proof (PR or PF) coin with a grading of 66 points out of a potential 70. DCAM stands for Double Cameo or Deep Cameo, which means that the impression is better than a normal proof coin.)

The reader now needs to sell the coin for personal reasons, but has found that SA Coin Corporation, the company who initially sold the coin, does not buy coins back. The reader may however fill out a mandate form, which would allow the company to sell it on her behalf.

The reader also approached The Coin Company to purchase the coin but was told that since it did not sell the coin initially, it can’t buy it back.

Moneyweb has in the past also written about similar cases where Mandela R5 coins were under discussion. These articles can be read here and here.

Blignaut says the internationally accepted definition of a rare coin is that it must be a currency coin, the coin must be of historical significance, the coin must be rare and, to be able to be classified as rare, must be measurable.

“To be measurable the coin must have been graded on an international quality standard in the USA,” he says.

SA Mint was approached for comment on the number of Mandela R5 coins that were minted in 2000, but has not responded by time of going to print.

Blignaut says there are more than 300 000 Mandela related R5 coins graded in the world today.

“There was an exceptional demand for these graded coins from day one. As with any other product the price is determined by the demand and supply of the product. The first proof coins graded sold for R735 each and very quickly reached prices in excess of R20 000.

“The association members inclusive of the SA Mint Company claimed that these coins were worth R5. Interestingly we had to buy the ungraded coins from the SA Mint co at R30 each, have them graded with no guarantee that they will grade and then market the graded coins,” Blignaut says.

Blignaut says a mandate does not provide a guarantee that the reader will get the money back – like is the case with other investments.

Blignaut says it does not buy coins back unless there is a specific demand for such a coin or a shortage at the time.

“I do not believe that there is any coin dealer or seller of products that buys back its products.”

Blignaut says the reader must wait until the market is right to sell.

He maintains that the reader did not pay too much for the coin when she bought it in 2007.

Glenn Schoeman, chairman of The South African Association of Numismatic Dealers (SAAND) and chief executive officer of Gold Reef City Mint, says the coin was “grossly overpriced” from the beginning, which explains why the reader has difficulty in selling it.

Just because a coin has a high grade, does not necessarily make it more valuable, Demby says.

Peter Wilson, chairman of the National Association of Numismatic Societies, says, they have been advising people “against this sort of thing as an investment”.

“They might be nice pieces for collectors, but for investors? No.”

Wilson says the Mandela R5 coins do not have the scarcity factor or the rarity factor.

“If people would just do a little bit of research before they rush into what they think is a good investment, they wouldn’t burn their fingers.”

Schoeman says there is a demand for the reselling of R5 Mandela coins, but at the right price.

“The demand for those coins is relatively good because it is very much an emotional thing. Everyone wants to have a piece of Nelson. But at R19 000? No.”

Schoeman says up to and including the time of former president Nelson Mandela’s passing, there was a great interest in these coins, because everyone felt if they got something with Nelson Mandela, it would be valuable one day.

While he agrees that this could be the case, Mandela’s passing was fairly recent. A lot of people have entered the market thinking they will get great value for the items with Mandela’s image on.

“The market is flooded with thousands upon thousands of people who’ve got the same idea.”

Schoeman says in time the market will stabilise and values will go up, but in the particular case of the reader’s graded Mandela R5 coin, prices will have to surge significantly to match the level of the initial selling price.

Schoeman says he does not necessarily believe the R5 coins is a great investment, “purely because they made too many of them”.

“There are so many of those coins – it is a case of supply and demand. There is an oversupply of those coins in the market at the moment and it is quite sad to hear people like this who spent a lot of money but they just haven’t done their homework.”

Schoeman also disagrees with the assertion that coin dealers or sellers don’t buy coins back.

He says most coin dealers who run an ethical business will buy coins back.

“Obviously, if the selling price is too high to start with then the seller won’t want it back.”

He says it is not standard practice for South African coin dealers not to buy back what they have sold.

He advises people to do their homework before they purchase a coin as an investment, to compare prices and to check whether the dealer is registered with the SAAND.

Demby also advises investors to do their research and to check whether the dealer selling the coins would be prepared to buy it back.

Demby says it does allow its clients to buy and sell.

“So there is a two-way market in coins that we deal in.”

However in the case of Mandela R5 coins, the company does not buy coins back.

“We are just not active in that market because we feel that the prices are not market related.”