How South Africa is connected to the global Internet

The country’s international connectivity increased significantly.
By My Broadband 6 Jun 2014  14:22

The global Internet is powered by thousands of interconnected networks in countries around the globe, and for South Africans to connect to these networks undersea fibre optic cables are needed.

Telecoms infrastructure from local providers such as Vodacom, MTN, Telkom, or Neotel connects a person’s device to a local network.

These networks are all connected, but if a person wants to get information from overseas the traffic must be carried over a submarine cable (or in rare cases, a satellite connection).

The following infographic shows how internet traffic from a local device reaches an international server. Many people expect a submarine cable system which carries lots of South Africa’s Internet traffic to be a rather large cable. Not so.

It is a surprisingly thin cable, which houses very thin fibre-optic strands which are used to carry data. How undersea cables are laid

Specialised ships and equipment are used to lay submarine cables, which is described in the video below.

The Internet started to enjoy widespread adoption in South Africa in the early nineties. Over the years the country’s international cable infrastructure grow to accommodate this growth.

South Africa is currently connected to the rest of the world through five submarine cables – WACS, Seacom, SAT-3, SAFE, and EASSy – offering multiple terabits of bandwidth.

This was not always the case. From 1993 to 2002 South Africa was only served through the SAT-2 submarine cable.

SAT-3/SAFE was launched in 2002, and this was the monopoly cable system until July 2009 when Seacom became operational.

Seacom’s launch was followed by EASSy and WACS, which created a situation where South Africa went from an international bandwidth starved country to having more than enough capacity.

The 9,500 km SAT-2 submarine fibre optic cable was launched in March 1993, and linked South Africa with Europe. It offered a peak capacity of 560 Mbps, and was run by Telkom in South Africa. It was decommissioned in January 2013. 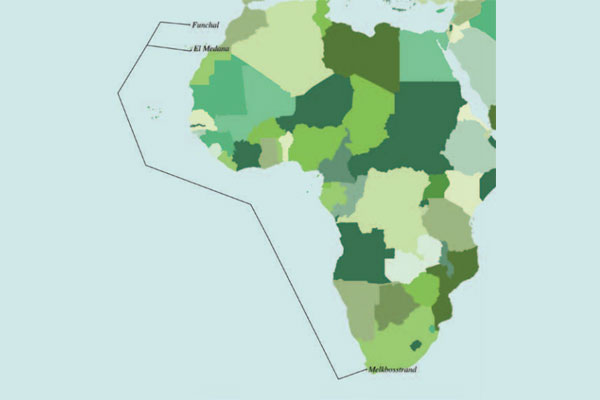 The SAT-3/SAFE submarine cable system started to offer services in 2002. SAT-3 connects South Africa with Europe on the West Coast of Africa, while SAFE provides redundancy on the East Coast by connecting the country to Malaysia.

When SAT-3/SAFE was launched in 2002 it offered a capacity of 20Gbps. Over the years many upgrades took place, and it currently offers hundreds of gigabits per second. Seacom was launched in July 2009, providing the only competition to Telkom’s SAT-3/SAFE at the time. The 15,000km cable system runs on the East Coast of Africa, and connects South Africa to London.

Seacom launched with design capacity of 1.28Tbps, and increased its capacity to 12Tbps in May 2014. It initially offered a capacity of 1.4Tbps, but in 2014 the EASSy cable system will be upgraded to 10Tbps. The West Africa Cable System (WACS) was launched in May 2012 with a design capacity of 5.12Tbps and providing the country with another submarine cable system on the West Coast of Africa. All the cable systems working together

The following cable map, provided by Steve Song’s Many Possibilities website, provides an overview of the different cable systems and their relative capacities.

This article was first published on My Broadband.