Orapa – If you were investing in the JSE (JSE:JSE) twenty four years ago, the chances were better than even that you were investing in Anglo American (JSE:AGL). In 1987, the group controlled 60% of the total market capitalisation of the JSE through 80 listed companies. That was its heyday as a conglomerate that spanned almost every sector of the local economy from banking to shipping, from automobile distribution to packaging, and from newspaper publishing to what it is most well-known for: mining.

Although Anglo American still makes up about 10% of the All Share Index (Alsi), it has controlling stakes in only two listed companies – Anglo Platinum (JSE:AMS) and Kumba Iron Ore (JSE:KIO) – and a 10% stake in Exxaro. Outside of the JSE, it owns 45% of De Beers. Since 2007 it has spun off Mondi (JSE:MND) and divested completely from AngloGold Ashanti (JSE:ANG), Highveld Steel and Vanadium, Hulamin (JSE:HLM) and Tongaat-Hulett.

In some ways, this might appear a drastic dilution of the group. However, most analysts agree that this trimming down was overdue and that what is now left in the Anglo American portfolio are the crown jewels in its core commodities of copper, diamonds, iron ore, manganese, metallurgical coal, thermal coal, nickel and platinum.

“The divestment of its non-core assets has created a more focussed group with high quality assets,” says Efficient Select analyst Stuart Sinclair. “Its exposure to diamonds and precious metals through De Beers and Anglo Platinum is what differentiates it from its diversified miner peers.”

Even so, the group’s decision to suspend dividend payouts during the global recession drew an enormous amount of scrutiny. Tough questions were asked about a management that had let the group slip into more than $11 billion worth of debt while spending similar amounts on buying back shares at high prices.

To a degree, many of those concerns have faded as Anglo American has steered itself through the turmoil relatively well and dividends have now been reinstated. Its balance sheet is healthier and planned expansion projects within core commodities also offer an encouraging view of the future.

“Management was severely criticized for transactions done towards the end of the bull market in 2008 and this has been reflected in the de-rating of the company relative to its global peers into the crash,” explains Neels van Schaik, Portfolio Manager at PSG Asset Management. “Ever since, management has taken significant strides to improve the operational efficiency of the group and destress the capital structure, mainly by speeding up the selling of the non-core assets in the business.”

In its modern guise, Anglo American Plc was established in 1999 by combining the Anglo American Corporation with Minorco, the Luxemburg-based company that controlled most of its offshore operations. The history of the Anglo American Corporation however stems back to 1917, when Ernest Oppenheimer raised £1 million worth of capital to mine for gold east of Johannesburg. His sources of capital were mostly British and American, which informed the name he chose for his enterprise.

In 1926 Anglo American completed its first major acquisition, when it became the majority shareholder in De Beers Consolidated Mines, founded by Cecil John Rhodes almost 50 years earlier. Thus began an empire that soon diversified into interests across the South African economy and stretched itself around most of the world.

Anglo American suspended its dividend between the end of 2008 and the middle of 2010 due to the need to conserve cash during the global recession. The group reinstated its dividend at the announcement of its half-year results to 30 June 2010, declaring an interim dividend of 25 US cents per share.

Anglo American CEO Cynthia Carroll told Moneyweb at the time that the reinstatement is “a reflection of our performance – the outstanding performance of the operational side really across the group – as well as the future uplift from the delivery of [future] projects.”

Historically, Anglo American’s dividend was a key part of its appeal and investors could usually expect a yield of 3% or better. Its total dividends per share (interim, final and special dividends combined) were 123 US cents in 2005, 175 US cents in 2006 and 124 US cents in 2007. The dividend for the full year to 31 December 2010 was 65 US cents per share, offering a yield in the region of 1.5%.

Which funds hold this stock?

A number of South African unit trusts were cautious about holding Anglo American during the period in which it suspended dividends. However, the group has returned to favour strongly in many funds across different classes.

All five of the leading general equity funds over the last three to five years have exposure to the counter. It is the largest holding in both the Absa Select Equity Fund and the Prudential Equity Fund.

The two top-performing large cap funds – the Absa Rand Protector Fund and the Coronation Top 20 Fund – also  have a liking for Anglo American. The counter is the largest holding in the former at 9.8%, and the fifth biggest in the latter at 7.3%.

To see which funds are buying and selling the counter, visit Moneyweb’s Unit Trust Portfolio Tool.

Why would an individual consider investing in this company?

Anglo American remains one of the top resources companies in the world. It has a well-diversified portfolio of assets, but where it really offers something different is through its interests in diamonds and platinum.

“Its platinum assets are the standout differentiator from other commodity producers, as South Africa is the only major platinum producer in the world,” says PSG Asset Management’s Neels van Schaik. “And De Beers still controls around 50% of the global diamond market.”

At the same time, its interests in copper, coal and iron ore put it in a strong position to cater to developing economies. Some analysts suggest that demand from the East for these commodities will remain robust into the foreseeable future. As the supply of these resources is obviously finite, the logical result is continued high prices, benefiting Anglo American’s cash flows.

The share also acts as a good rand hedge, as rand weakness will always translate into higher rand prices for resources quoted in dollars. However, this does also mean that Anglo American’s earnings are highly sensitive to movements in the local currency.

What risks does this company face?

The uncertainty surrounding the South African mining industry is one of Anglo American’s primary concerns. Investment returns in the country are coming under pressure due to a heavy tax regime, black economic empowerment demands and creaky legislation. The debate around nationalisation is also not going away.

“A high portion of the group’s operations are situated in South Africa, which makes the group susceptible to any change in government policy on mine ownership and regulations,” asserts Efficient Select’s Sinclair.

Through its stake in Kumba, Anglo American has a direct interest in the high profile dispute around mining rights at Sishen.

In addition, mining inflation in South Africa, especially labour costs, has been under significant upward pressure over the last few years and this is expected to remain so. The current round of wage negotiations are once again seeing unions request above-inflation wage increases.

Where does this company’s growth potential lie?

Anglo American has a potential $70 billion project pipeline which it believes could lead to a doubling of production over the next decade. Three major projects across the world in copper and iron ore are currently nearing completion, while the Barro Alto nickel operation began production in March. 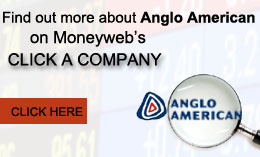 These major projects “will see volumes increasing generally by more than 30% over the next few years,” Van Schaik believes.

This appetite for expansion within its core commodities should therefore deliver good organic growth for the group. These metals have been identified in particular because Anglo American believes they offer the most attractive risk-return profiles over the long term. Analysts suggest that its interests in Brazil are particularly impressive and may well drive a new era of growth for this South African-born global giant.

The group also continues to emphasise the importance of platinum in its portfolio, highlighting recovering vehicle sales, jewellery and investment demand as the driving forces behind improved market fundamentals.

While its heavy indebtedness was a turn-off for investors in recent years, Anglo American has also made significant progress in reducing this burden. The group’s net debt eased from $11.3 billion at the end of 2009 to $7.4 billion at the end of  last year. This was mainly due to  proceeds received from its divestments, although an anticipated cash injection from the group’s new operations could lead to further improvement in this area.