ORAPA – Despite the pressures of intense competition and restrictive legislation, the South African pharmaceutical industry finds itself in strong health. Over the past two years, all of the three largest pharmaceutical shares listed on the JSE have been amongst the bourse‘s most robust performers.

The share prices of Adcock Ingram (JSE:AIP), Cipla Medpro and Aspen Pharmacare (JSE:APN) have been on a sustained and significant upward trend since the start of 2009, all gaining at least 50% in this time. While this is impressive enough for the first two, it’s particularly noteworthy in the case of Aspen, which has a market capitalisation nearly four times that of Adcock and more than ten times that of Cipla.

Aspen’s success has been based on an aggressive growth strategy, made possible by the demand for generic pharmaceuticals. Having established itself in South Africa, thanks to the local demand for generic antiretrovirals (ARVs) and tuberculosis (TB) treatments, the group has been able to expand through a focus on emerging markets, where demand for more affordable medicines is most prevalent.

“Aspen identified the opportunity within the local market as it moved towards higher generic penetration,” says Investec Asset Management’s Neil Stuart-Findlay. “That shift occurred over the past decade and drove growth  in the generics market   significantly in excess of  the overall pharmaceutical sector .”

Aspen now has a presence in over 100 countries, with around 40% of its operating profit accrued outside of South Africa.

Aspen began as a small business in Durban in 1997. Two years later, the company made a successful R2.4bn hostile takeover of SA Druggists, the largest South African-owned pharmaceutical company at the time. Appreciating the potential to supply HIV/Aids TB treatments to the South African government, Aspen sold off almost everything other than SA Druggist’s manufacturing capabilities. 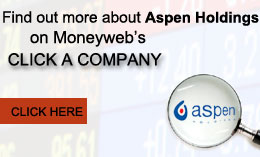 Over the course of the next decade, the group signed a number of agreements with multinational pharmaceutical firms, gaining the rights to manufacture and market generic versions of their products. These initially focused on ARVs, but soon branched out into various drug categories.

Aspen also engaged on a growth strategy that took its operations into sub-Saharan Africa, Latin America, Asia Pacific and the United Kingdom.

Which funds hold this stock?

Aspen is not widely represented in South Africa’s leading unit trust funds. It is however the largest holding in the country’s top-performing equity industrial fund over the last five years. The stock currently makes up just under 7% of the Stanlib Industrial Fund.

The second best performer in the equity industrial category has however sold out of the counter in the past 12 months. Aspen accounted for a fraction under 3% of the Coronation Industrial Fund in December 2009, but the fund now holds none of the stock at all.

Of the five leading general-equity funds over the last three to five years, only the Allan Gray Equity Fund has a position on the counter. It currently gives Aspen a weighting of 0.25%.

To see which funds are buying and selling the counter, visit Moneyweb’s Unit Trust Portfolio Tool.

Why would an individual consider investing in this company?

By its nature, healthcare is a defensive sector. No matter the economic environment, people

continue to require pharmaceuticals – particularly chronic medications, such as ARVs – and this translates into fairly stable cash flows for a company like Aspen.

Aspen’s strong cash generation capabilities have also allowed it to fund its highly successful growth strategy. This has been driven by an astute management team.

“Management has a strong strategic vision for the company and has managed to keep a handle on expansion,” says Investec Asset Management’s Stuart-Findlay. “They have established a strong and well-positioned company in the domestic market, and then have looked to expand globally, partially through the alliance with Glaxosmithkline (GSK) and partially through their own endeavours.”

Aspen’s relationship with global pharmaceutical giant GSK, which owns nearly 20% of the business, has provided strong avenues for growth. Through the tie up, Aspen has gained the rights to distribute GSK products in South Africa, the two companies are collaborating to market and sell prescription pharmaceuticals in sub-Saharan Africa, and Aspen acquired eight specialist branded products for global distribution.

What risks does this company face?

Across the world, the healthcare industry is almost inevitably a target of regulation. Given the vital nature of the sector, governments feel obliged to provide some level of healthcare security for their citizens. Particularly in developing countries, where healthcare needs are often extreme, regulatory risk is a notable concern for pharmaceutical companies like Aspen.

In South Africa, the single exit pricing regime, through which the prices of medicines are fixed, has just about put a lid on margins for manufacturers. However, there has been a definite thawing of the relationship between government and private healthcare in the last couple of years, which is a positive sign for Aspen.

“The domestic regulatory environment seems fairly benign at present, and it is encouraging to note that the public and private sectors appear to be employing  a more cooperative approach towards domestic healthcare initiatives,” Stuart-Findlay notes.

There is however one key unknown that Aspen faces in the South African environment: the proposed National Health Insurance (NHI). There are still significant question marks around how and when it will be implemented, and management has generally declined to be drawn on whether it will be positive or negative for business. However, given that generics offer the opportunity for more affordable access to medicine, which is a key component of the NHI, it is probable that any roll-out should stimulate demand for Aspen’s products.

Globally, Aspen also faces the challenge of maintaining a hold on a business that has expanded at a terrific rate in the last four or five years.

“They have taken on a lot in terms of their global expansion,” says Stuart-Findlay. “With the spread over so many territories, it is a challenge for management to make sure everything is running smoothly.”

Where does this company’s growth potential lie?

Although Aspen is well established in South Africa, they cannot afford to be complacent in the competitive local market. Their relationship with GSK has however strengthened their market position. The business is supported by its strong product pipeline.

The group is also looking to expand in Australia, where it is close to finalising a deal to purchase the pharmaceutical division of Sigma Pharmaceuticals. Should the acquisition be approved, it could make Aspen the largest pharmaceuticals company in that country and one of the top ten generics manufacturers in the world. This would make it an appealing partner for drug development and biotechnology companies creating products for emerging markets.

The group will also continue to look to increase its global reach. In particular, it sees significant opportunities in Latin America. Given Aspen’s success in establishing manufacturing and marketing operations in east Africa, it is also expected to make similar moves into west Africa.

“Generally speaking, they are looking to focus on emerging markets where income levels and hence healthcare penetration are rising,” Stuart-Findlay believes. “If they can capture market share in these geographies, then Aspen’s impressive growth track record can continue. They have the opportunity to leverage off the GSK platform and as they establish distribution networks in these emerging markets they can push more products down those channels, and thereby drive efficiencies and profits.”