Why you shouldn’t lose sleep over headlines

JOHANNESBURG – Long-term investors should not really be perturbed by day-to-day headlines.

What really matters is time and diversification.

Speaking at a presentation of financial consultancy firm deVere Group, international investment strategist Tom Elliott said it is more important to be invested in the market than to agonise over particular asset classes.

Amidst emerging market fears and other potential global risks, long-term investors should make sure that they have a portfolio of widely diversified assets and rebalance every year or so in order to capture gains as assets recover.

“Over long periods of time you’ll do quite well,” he says.

He emphasises that it is important to stay invested – growth in the global economy is accelerating and interest rates will likely remain low. This scenario should support profits and is good news for equity investors.

Elliott favours equities over bonds in his multi-asset portfolio. While US equities are not cheap and can only be considered “fair value” in terms of its long-term valuation it is still expected to outperform alternatives like cash and fixed income.

From a US perspective, a mixed portfolio of diversified assets has delivered a total cumulative return of around 100% over the last ten years.

Elliott says while the S&P500 delivered a return of 104% over the same period, it was accompanied by a lot more volatility.

A diversification strategy could however, mean that long-term investors will need to invest in some of the more “boring” asset classes.

While the US Federal Reserve’s tapering of quantitative easing and the impact of a reduction in liquidity on emerging markets with substantial current account deficits has been a general theme in recent times, a number of other risks could also make headlines.

Elliott says the shift away from exports and investment to consumer-led growth in China could introduce some challenges.

He explains that a country can only build so many bridges before it results in a reduction in use.

“That’s essentially what China is facing.”

The benefit of consumption is that it is far less volatile. If a country derives more of its gross domestic product (GDP) from consumption, GDP is more stable.

While the development of infrastructure (like building bridges) is generally not a frequent occurrence countries tend to start consuming more as they get wealthier, which adds a level of stability to its GDP. This allows interest rates to come down and boosts growth.

The fact that China’s economic growth is slowing also carries risk and there may be layoffs in export and construction-related industries.

China also faces a financial problem. Its Credit Equals Gold #1 Trust is a $500m retail trust which bears some resemblance to the US sub-prime mortgage crisis.

Elliott explains that it is based on a loan that a bank gave to a mining company that is now in default because the government is trying to steer the economy away from these sorts of industries.

He says it is estimated that some $600bn worth of these types of trusts are sold to retail investors in China and while these trusts are not all exposed or risky, there is a significant market for it.

“This could be a big story this year.”

Another worry is that of potential deflation in the eurozone.

While people are often warned about inflation and its eroding impact on savings, deflation is also of concern.

Elliott explains that consumers don’t spend in such an environment as they believe products will be cheaper the following month.

And while inflation erodes debt, deflation does the opposite.

Therefore consumers don’t want to borrow money and companies do not invest.

However, these types of risks should not be a major cause for concern.

“What you need to look at is where we are in a global economic cycle. I think we’re [moving] upwards.” 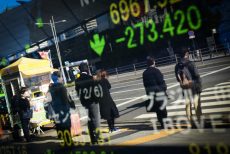