What are we teaching our children about money?

If we can start having real conversations about money with our children from a young age, we can take the stress out of financial planning for them before it is too late.
19 February 2021 13:42   /  By  Michael Haldane - Global & Local Investment Advisors 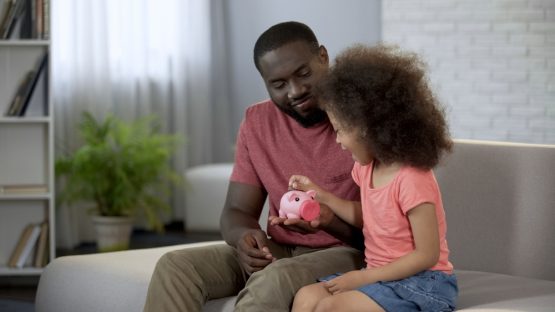 It’s a whole new world out there!

Many families find themselves eagerly awaiting the 2020 Matric results, due to be released on Monday. With a large number of teens having been unfortunate enough to face “matric via WhatsApp” in 2020, there are now thousands of children and parents in South Africa hoping that it will all work out in the end.

Speaking to parents of children in their last year or two of school, I’ve come to the conclusion that the world has gone mad. The price of good high school education in South Africa seems to have reached what can only be described as ludicrous levels. You know something is very wrong when parents can’t wait for their kids to go to university so that the monthly education bill can finally reduce.  This has many parents facing an almost impossible task of trying to give their children everything they “need” to be a success one day.

That’s of course if you measure success in the traditional way – by education and a respectable job. The thing is, even if their parents can afford the best high schools and follow that up with a university education, my circle of friends (you can guess our average age from the clues in this article), found that many of our children have absolutely no desire to become a doctor, lawyer or account. Oh, the horror!

I recall a very serious conversation around the dinner table with a friend’s son around four years ago. He put forward the argument that a proper gaming pc would be a true investment in his future. He made a solid argument around building superior strategic thinking skills from playing the complex games and he even put forward scientific research about the benefits of gaming for the brain.  His mom told him to stop dreaming and take out the trash.

You see, there was one fatal error in his approach. He used the word “investment” in the conversation but never spoke about the monetary returns. The conversation was way too airy-fairy for this old goat. Now if he had mentioned the money, she may have been able to retire off her cut as his agent in the eSports industry by now! Recalling the incident, made me wonder about the jobs out there that my generation would never have taken seriously. There is hope yet for those children who cannot imagine anything worse than being forced to study even more after school…

Enter Tyler Blevin. This 28-year-old professional (yes, professional) gamer earned around $17 million last year. You may think that he did it by being at the top of his game (see what I did there?) and winning several tournaments, but his prize money for the year came to less than $100 000. The real money was made from endorsements and sponsorships. A good deal for all involved if you keep in mind that those sponsors had the attention of his 22,7 million YouTube subscribers and 14,9 million Instagram followers. And not even an introductory Fortnite class to be found in any school anywhere in the world! If I’ve lost you, Google “Influencer”, “Fortnite” & “eSports” for an introduction to that whole new world I mentioned above.

Tyler’s YouTube following is dwarfed by that of 9-year-old Ryan Kaji who earned a staggering $29,5 million in 2020 by posting videos of him unboxing various children’s toys. If you work past the uneasy feeling you get when you picture the pressures of being constantly filmed and being “responsible” for making all that money (I’m pretty sure it wasn’t his idea to start with), you cannot deny that this sort of income is life-changing and did not require any formal, expensive education.

Please understand that I am not saying that you are wasting money on your child’s education. The opportunities available to well educated young people will always greatly outnumber that of the average person out there looking to make ends meet. That is, if they want those opportunities.

Many an article has been written about how the financial habits of Millenials are so vastly different from those that came before them.  We have analysed how they spend their money in great detail but looking at how they make their money is actually much more interesting, even if sometimes perplexing!

Fast forward to Ryan Kaji’s generation and it seems the world is their oyster. Living in a country where education is a scarce resource, it gives me hope to be reminded that generations to come will be able to generate wealth and have some financial security, even if it is from jobs that I have never heard of until a year or two ago. This is not to say that we can stop worrying, the kids will be alright, but perhaps we do need to change our approach with our children when it comes to money.

Our ideas about money are ingrained into our value system from a very young age. Depending on your parents’ financial situation, money can be a source of great consternation for some while others may grow up completely oblivious to its power over their lives.  Treat it wrong, and your children will measure their success by their bank balance. Irrespective of how your children will make a living one day, one thing is guaranteed – if they don’t know how to manage it, they WILL lose it again.

All this Instagramming and TikToking creates a very artificial world and in that world where posting pictures of what you have is the ultimate measure of your success, our children are getting dangerous ideas about what money should mean to them.

Whatever your definition of wealth, wealthy children need to learn that having money is a privilege, not a right. Approach that lesson in the wrong way, and they may feel guilty for having that privilege. A household that struggles to make ends meet may breed a child that is constantly so worried about money, that they never reach a point where they have enough. The sooner a child can learn that, while money is extremely important, having lots of it will never fill the most basic needs we have as humans.

I wish I could tell you how to do it right, but there is no one-size-fits-all rule book when it comes to teaching your children about money. What’s right will be very dependent on the child, the parent and the situation. One thing that I know for sure, is that even in the year 2021, the average parent is still not talking to their children about money. Most conversations are of the “please”, “no”, “oh ok this one-time” variety and yet they are expected to know the value of a rand when they finally earn their first income.

Perhaps if we can start having real conversations about money with our children from a young age, we can take the stress out of financial planning for them before it is too late. They need to know what mistakes you made with money and they need to be inspired by your successes. Whether it is with a few bucks as and when you can afford it, or with enough resources to put an elaborate budget in place for their allowance, children need to learn to take responsibility for their own finances and how to delay the gratification of spending some of the money that they have worked for. These harder lessons need to be balanced by giving them the freedom to enjoy money when they have it, without being completely irresponsible.

Let them learn from their mistakes in the safety of your home before those mistakes can cause enormous harm to their futures. Give them hope that even if things are tough at the moment, they can (and should) take control of their own finances. Teach them about financial goals and discipline. And if they come up with some weird way to make money…let them!