Battered taxpayers hope for some relief from government this week

Revenue collections expected to be higher than earlier estimates.
By Amanda Visser 21 Feb 2022  00:03 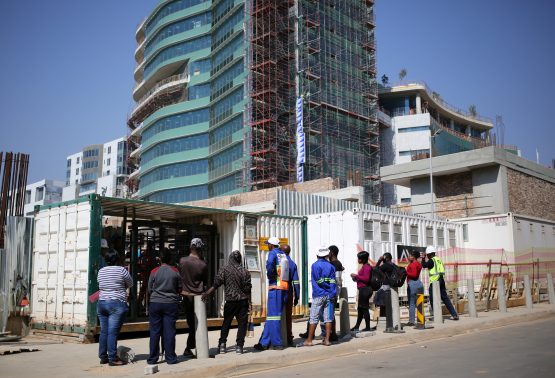 A reduction in the company tax rate would help the unemployment situation, but isn’t expected this year. Image: Siphiwe Sibeko/Reuters

The lyrics of the Simply Red song ‘Money Too Tight (To Mention)’ are applicable to millions of South Africans. Most are hoping for some relief when Finance Minister Enoch Godongwana delivers his budget speech on Wednesday.

However, tax commentators expect a rise of at least 20c per litre in the general fuel levy and another 13c to 15c/litre in the Road Accident Fund levy.

The introduction of a levy on data to collect revenue that will replace the obsolete SABC TV licence model also seems to be on the cards.

The SABC earlier asked for a revision of the broadcasting regulations so that the definition of a ‘television set’ could be changed to ‘broadcasting device’. People no longer need a television because they can access content by connecting to the internet on several other devices.

Yolandi Esterhuizen, tax practitioner and director at Sage Africa and Middle East, says it is also time to take a closer look at the tax treatment of home office expenses.

“Many employees have had to incur additional costs to work from home, and not all employers are compensating them for these expenses. The requirements to claim these expenses are stringent.”

Read: Adapting to the reality of the post-Covid workplace

Esterhuizen notes that individual tax brackets were increased by 5% in the 2021 budget (to compensate for fiscal drag), which provided some relief for taxpayers since it was more than inflation.

“We may not see such a generous tax bracket adjustment this year, but I’d be surprised to see an increase in personal income tax,” she says.

ENSAfrica agrees in its budget prediction note, saying that personal income tax as a source of revenue is already negatively impacted by emigration, unemployment, pay cuts and poor economic growth.

PwC meanwhile refers to the exit tax on retirement savings when an individual ceases to be a South African tax resident and the severe criticism this was met with on a number of fronts.

There were also concerns about the practical feasibility of the proposed tax and whether it would be enforceable under certain double tax treaties which grant sole taxing rights on pensions to the country where the individual lives. However, National Treasury has already indicated that it will start renegotiating the affected tax treaties.

PwC expects a formal announcement on the process in this year’s budget.

Although the legislative amendments were included in the 2021 tax amendments, government has postponed the introduction of the measures until a date to be announced.

“Following these developments, the reduction of the CIT [corporate income tax] rate to 27% is, at the earliest, expected to be announced in Budget 2023 and implemented in 2023-’24,” say PwC commentators.

However, ENSAfrica says delays in implementing the rate reduction would be unfortunate, as lower tax payments will assist in ensuring the survival of South African companies

Loss of employment impacts directly on personal income tax and value-added tax (Vat), two of the biggest contributors to the South African tax base. As such, companies must be given as much financial support as possible, starting with a decrease in their tax liability, says ENSAfrica.

PwC expects tax revenues to be up to R200 billion higher than the original 2021 budget estimate. This is on the assumption that the strong performance in company tax collections continues through March. It is expected to exceed the original budget estimate by about R120 billion, primarily driven by the resources sector due to high commodity prices.

Personal income tax could exceed the original budget estimate by about R40 billion and Vat by about R10 billion.

National Treasury is now in a position to adopt tax policies that are supportive of economic growth, given the significant improvement in revenue collections for 2021/22.

Esterhuizen believes unemployment must be tackled through a “dual-pronged strategy”.

This will include incentivising and supporting job creation while providing financial relief for the unemployed. She refers to statements made in November last year in the medium-term budget policy speech on additional resources for social relief if the fiscal situation improves by February 2022.

“The speech also noted that a decision would be announced regarding the presidential youth employment initiative. I’m hoping we will see bold action on this front,” she says.