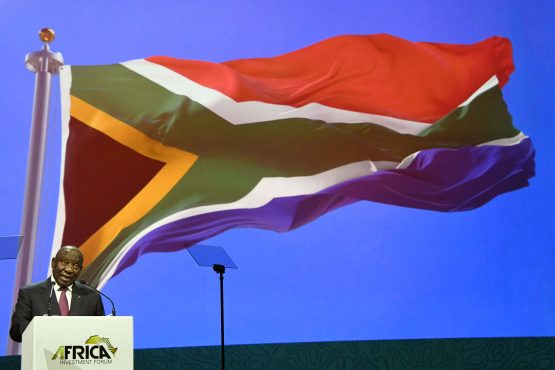 President Cyril Ramaphosa at the second Africa Investment Forum. Making SA tax rates more competitive is another way of increasing the rate at which the country can rebound. Image: GCIS

The 2021 budget delivered by Finance Minister Tito Mboweni shows clearly that the penny has dropped in terms of the inability to increase tax revenue by increasing tax rates.

Instead, the minister delivered a strong message of encouragement and that the country is aiming to become more competitive.

Michael Hewson, director at Graphene Economics, says the reduction of the corporate tax rate from 28% to 27% gives a signal that SA is looking to be more competitive.

“Many of our peers have already been reducing corporate tax rates.”

Hewson notes that the reduction will be offset by limiting the use of assessed losses to reduce company’s tax cost, and by restricting excessive interest deductions.

He says the use of interest deductions has been a thorn in the side of the South African Revenue Service (Sars) for ages.

The practice of companies gearing too much and then claiming deductions on the interest will be curtailed, but the minister is at the same time fueling a positive sentiment with the reduced rate.

Keith Engel, CEO of the South African Institute of Tax Professionals, says the budget was better than he expected.

“The minister has knocked off all tax increases by giving a 5% relief for bracket creep and by withdrawing the R40 billion tax increases over the medium term,” he says.

“The bottom line is that the minister does not look at tax increases as his hope for the future. That is critical.”

Mboweni referred to research that shows tax increases have a larger negative effect on growth than spending reductions, and these effects are more pronounced during a downturn. South Africa experienced its largest downturn in 2020 when GDP growth contracted by 7.3%.

The reduction in the corporate income tax rate is a strong signal that government will be giving the private sector room to move.

Although government will no longer be pushing big incentives, it realises that taxpayers are “taxed-out”.

Lowering the corporate tax rate to 27% signals that our current rate makes the country uncompetitive and that holding on to it is not sustainable against everyone else. The global average is 23.6%.

“He sees that we have reached the point where government has been strangling the private sector and we have now pulled back from the brink,” says Engel.

National Treasury projects that SA will rebound to pre-Covid-19 levels in four years compared to other developing countries that are set to rebound much more quickly.

Making SA tax rates more competitive is one way of increasing the rate at which the country can rebound.

Hewson says one of the reasons the projected shortfall of R313 billion was reduced to R213 billion was due to a recovery in consumption and wages from October onwards, as well as better than expected company profits, particularly in the mining and resource sectors.

“The fact that the minister is compensating for bracket creep [for individuals] above inflation was a clever move. He killed two birds with one stone.”

The European Union (EU) and the United Kingdom (UK) economies are expecting to “flip out of their bad state” and recover to their 2019 levels in two years.

Hewson says EU and UK consumer saving levels have increased because of the Covid-19 lockdowns. People were not able to travel or visit restaurants, pubs and theatres. Once their economies open up and the vaccine rollout is done the rebound will be very quick because people have savings to spend.

“In SA the different lockdown levels have eroded our saving levels because there were job losses and people had to support friends and family,” notes Hewson.

“We do not have that savings buffer to kick-start our consumer spending like the EU and the UK. So again, putting money in the hands of the consumer can help to improve the rate at which we can come out of our economic troubles.”

Albertus Marais, director at AJM Tax, says the government has now realised there are certain serious structural problems that exist in the South African economy.

“The wage bill, which absorbs a massive 47% of total revenue year on year, has clearly become a clear and present danger to South Africa’s fiscal position which can no longer be ignored, no matter how politically inconvenient.”

He says there are many “unsurprising matters” contained in the budget, such as the average 8% increase in duties on alcohol related products and tobacco products, as well as increased levies insofar as fuel and the Road Accident Fund are concerned.

“What is perhaps somewhat disappointing is the slow progress in implementation of exchange control reform, with scant detail made available in this budget on further relaxation, perhaps even signaling a rethink of some of the generous relaxations anticipated and announced over the past year.”