Mboweni’s big surprise: None of the nasty surprises we expected 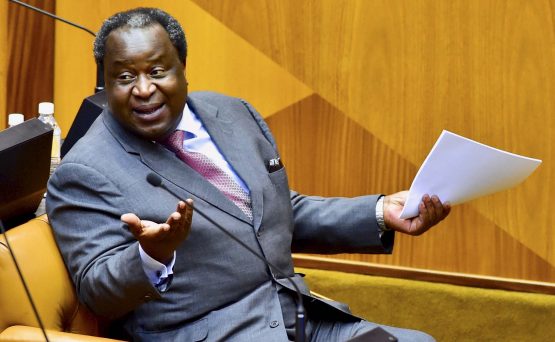 When delivering his budget speech, Finance Minister Tito Mboweni created the impression that he is confident that things are not as bad as everybody may think. He told South Africa, and the world, that the country can conquer the current challenges.

His budget speech lasted only 58 minutes, but it contained an ample supply of the no-nonsense comments that Mboweni has become famous for, mixed with a not-too-subtle message apparently aimed at rating agencies that things will improve.

“We have it within ourselves to be the best in the world. Our economy has won before, and it will win again,” he said to fellow members of Parliament and the public. He mentioned our local beauty queen who won the Miss Universe title and a few sports victories to set the stage for his positive message.

He dug up a few figures to remind everybody that the economy has grown well in the past, but also went through difficult patches. Between 1990 and 1991, the economy contracted for three consecutive years and faced average 3.6% growth per annum for the next 15 years.

“In the five years from 2003 to 2008, growth averaged around 5% and SA was among the fastest-growing major economies in the world,” said Mboweni.

“Now, even after a decade of weak economic performance, SA still boasts deep and liquid capital markets, strong institutions, the most diversified economy on the continent and a young population.

“We are part of the most vibrant continent in the world.”

Even taking into consideration that it is part of his job to bolster confidence, Mboweni’s arguments sounded plausible. But he warned that “winning requires hard work, focus, time, patience and resilience”.

He quoted figures that show that SA is not achieving its growth potential – not by a long shot.

The minister listed six factors that will give the economy a “jump start” over the next 18 months:

Mboweni said persistent electricity problems will hold back growth, which government expects to average only 1% per annum over the next three years. “A stable supply of electricity will be our number-one task,” he says. “Government will do whatever it takes to ensure a stable electricity supply.”

He reiterated government’s commitment to accelerating renewable energy programmes, with plans that will be implemented to enable municipalities “in good financial standing” to purchase electricity from independent power producers.

Mboweni also stuck with his previous (unpopular) view of South African Airways (SAA), saying that the SAA Sword of Damocles has now fallen on us, referring to a saying that describes a great peril faced by authorities when things go wrong.

The cost of the peril in this budget is another R16.4 billion to settle debt and interest guaranteed by government in previous years.

He alluded to supporting the business rescue practitioners in their task to “radically” restructure the entity into a sustainable airline that is not a burden on the fiscus.

Mboweni also referred to other public entities, saying that merging and consolidation will be accelerated to reduce costs.

Furthermore, a new law is proposed to limit “excessive salaries” in public entities.

The minister seemed to have pre-empted criticism, saying: “Budgets are complex, but figures are simple. The numbers show that we have work to do.”

He took a tough stand on government expenses. Nobody was spared.

Members of Parliament were quiet when he told them that the current wasteful subsistence and travel system will be abolished, their cellphone contracts will be limited and they will be allowed to fly only economy class.

Several (costly) diplomatic missions in other countries will be closed or downgraded and the number of officials in missions and diplomatic offices will be reduced.

The state wage bill will come under scrutiny with the aim of saving R37.8 billion in the new financial year. Government aims to reduce the wage bill further to save R260 billion over the next three years. “Organised labour understands where we are,” says Mboweni.

He indicated that corruption and wasteful expenditure are to blame for a lot of the problems with regards to government services.

“Classroom sizes are growing, hospitals are getting fuller and our communities are becoming increasingly unsafe. We cannot go on like this,” said Mboweni.

He promised improvements in increasing staff levels and service delivery, but only after government gets wage growth, corruption and wasteful expenditure under control.

He talked tough on corruption, and the budget makes provision for increasing the capacity of authorities to investigate and prosecute corruption, as well as efforts to recover stolen funds.

Sticking to the basic facts and figures and outlining a simple action plan deflected immediate criticism.

This left the two main opposition parties to complain to the speaker that the police hassled some of their members by treating them as average people, even asking them for identification before allowing them into the parliamentary building.

The Fin Min must be lauded for what seems like a “pro-growth” budget (forego too high tax & allow for increased economic activity to bring in SARS collections / i.e. make the pie bigger)

But as someone said, this is a RISKY budget….by trying to keep rating agencies happy, Govt now commit to cut the state payroll dramatically. And IF/WHEN this does not happen due to typical labour resistance…then Tito will roll the truck / stall the truck’s engine inside the rail-crossing…

Sounds good. But talk is cheap

To say that “The Sword of Damocles” has fallen is not to say that there is great peril but to say that Damocles is dead. Freud would have picked up on that.

Like a said before, our dictators has a Powerpoint presentation and a lot of procrastination.

A true ANC budget-built on dishonesty. The key issue is cutting the public sector wage bill by a solid R 160bn over 3 years. Everyone knows that this cannot and will not happen -Cosatu cannot tolerate this -so all what the ANC have done is misrepresented this so called saving to the credit agencies-only one of which has bought this fairy tale( or has been bought to buy it?)

There are some Public servants that merit a job and an increase but the majority are KFC parasites.