A look at what the Finance Minister faces when he presents the country’s third set of budget plans this year on Wednesday.
By Prinesha Naidoo, Bloomberg 28 Oct 2020  06:28 Finance Minister Tito Mboweni will have to balance finding money to help Africa’s most-industrialised economy recover from its longest recession in three decades, bail out state-owned companies and fund civil servants’ pay increases with pledges to rein in government debt and shrink the budget deficit.

These charts show the tough task Mboweni faces when he presents the country’s third set of budget plans this year on Wednesday. 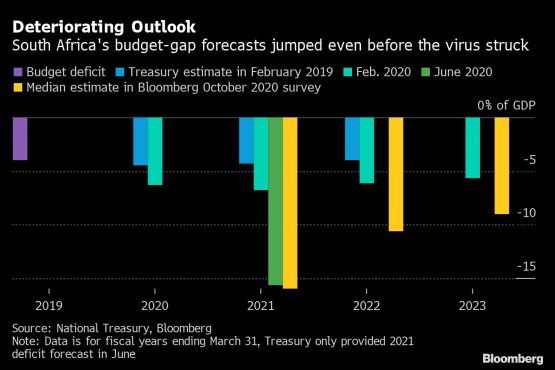 Lockdown measures to curb the spread of the virus weighed on revenue collection and the forecast for the consolidate budget deficit for the year through March 31 could now be even wider than the 15.7% of gross domestic product that Mboweni projected in the June supplementary budget. Debt as a percentage of GDP will peak in 2024, but that’s in the Treasury’s best-case scenario, where the government takes active steps to stabilize the trajectory and revive the economy. The cost of servicing the country’s loans has been the fastest-growing expenditure item since 2011 and is forecast to climb even further. While the cabinet backs Mboweni’s plans to target a primary budget surplus by 2023-24, any austerity measures are likely to face opposition, including from politically influential labor groups. Plans to reduce the public-sector wage bill, which has climbed by 40% over the last 12 years, have stalled and the Treasury has warned a bid by unions to compel the state to honor a salary deal would lump the country with R37.8 billion of additional debt.

If the government is concerned about ruining its long-term relationship with labor groups, which would affect service delivery, it could grant the 1.5% increase for 2020 promised in February and in return demand a compromise that would allow it to increase pay by 3% for the next two years, Michael Kafe, an economist at Barclays Bank, said in a report. That would still allow it to save R176 billion of over the three years, the same outcome as a wage freeze in 2020, followed by 4.5% increases in the following two years, he said. Mboweni faces pressure to continue to support state-owned companies. While power utility Eskom Holdings has accounted for the vast majority of bailouts since 2009, the minister is expected to announce further support for South African Airways, arms company Denel and The Land and Agricultural Development Bank of South Africa this week.

With even more companies under pressure the “government and the finance ministry are going to have an avalanche of requests in the coming months,” said Mike Schussler, chief economist at Economists.co.za. If the government fails to lower the public sector wage bill and reduce lifelines for state companies, it’ll be forced to continue cutting allocations for government departments to narrow the gap between spending and revenue. With Mboweni due to outline spending and revenue-adjustment measures amounting to about R250 billion over the next two years, 30% of economists polled by Bloomberg expect him to lay the groundwork for a wealth tax, among other levies. 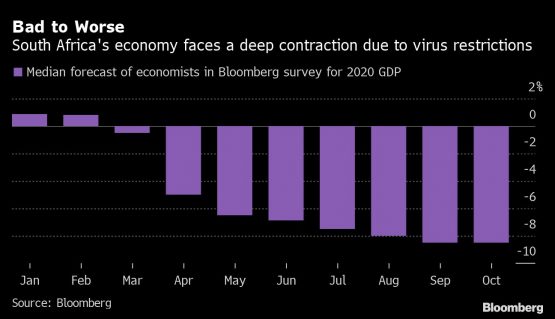 Spending cuts and tax hikes could could hinder the recovery of an economy that’s expected to shrink 8.5% this year, according to a separate Bloomberg survey. That would be even worse than during the great depression. The Treasury will probably revise its June estimate for a 7.2% contraction this year, after the lockdown weighed on output, forced struggling companies to shut down and left millions without work.

….Amazing how the ANC are so successful at contracting the country’s economic growth to actually expanding it
But hey…..better to be successful at something even if it is stupid

What is laid out before the ordinary tax payer:
cANCer economics!!!

“If the government is concerned about ruining its long-term relationship with labor groups, which would affect service delivery”

No need to worry then. There is no service delivery. Just go to any licensing office or Home Affairs. Go right ahead and retrench 50% of these useless parasites.

NO politician or economist wants to touch on this subject, yet it ALONE is the key to turning this country’s dismal future around into one of promise and success.

One cannot fix what one will NOT acknowledge.

You must Google the chart for SA Population Growth (which shows the growth of the different face groups from about 1910 to about 2016) yourself.