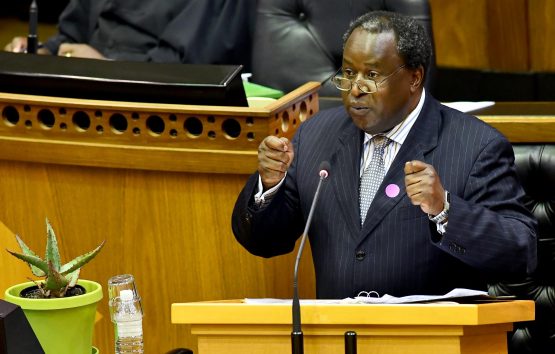 Finance Minister Tito Mboweni’s Medium-Term Budget Policy Statement speech in Parliament was in a sense a continuation of the one given on the economic reconstruction and recovery plan by President Cyril Ramaphosa two weeks earlier.

He touched on many of the same themes and programmes to get the country’s economy going, like the R2.2 billion that will go into supporting a social housing programme, and efforts to get more businesses to take up the state-backed loan guarantee scheme.

The minister fleshed out more details on the District Development Model, which is meant to fast-track infrastructure and general socio-economic development. This programme will see R806.7 billion allocated to national departments, R628.3 billion to provinces and R139.9 billion to local government.

He also gave more specifics on how the government is looking “unlock and fast-track implementation of the structural economic reform agenda”.

Ramaphosa announced the launch of Operation Vulindlela as a way to achieve this. Mboweni said deputy minister David Masondo will lead this initiative and will be supported by a technical team, headed by Dr Sean Phillips. “This will ensure that implementation is well-coordinated, sequenced and timeous.”

On the matter of Covid-19 relief, he said as the social relief of distress grant is effective at reaching the unemployed, and it was decided to redirect R6.8 billion from the public employment programme to the grant and extend it to the end of January 2021.

Around R12.6 billion will go to an array of social development jobs this financial year. About R7 billion of this will got to supporting jobs at fee-paying public schools and government-subsidised independent schools.

Another R600 million goes to employing early childhood development and social workers, and R2 billion is allocated to Working for Fire, Working for Water and Working for Forests.

Though there was a lot familiar with the ‘mini budget’, there were some surprises.

The biggest one is Treasury finding the R10.5 billion to keep South African Airways (SAA) afloat. Mboweni has been hesitant to allocate money to the struggling airline despite pressure from inside the ruling ANC to do so.

In the end, Mboweni relented. “This allocation is funded through reductions to the baselines of national departments, public entities and conditional grants.”

SAA was not the only institution to get an assist from the minister. The Land Bank was granted an additional R7 billion over the medium-term, following it getting R3 billion in June.

There was, however, no mention of any support for arms maker Denel or public broadcaster the South African Broadcasting Corp (SABC).

Mboweni said there was a slight improvement in the budget deficit of R707.8 billion, when compared to that of the Special Adjustments Budget. This, however, still leaves it unchanged as a proportion of GDP at 15.7%.

To meet this shortfall, the government has approached finance institutions like the International Monetary Fund for support.

To meet its funding goals, Mboweni said civil servants will have to play their part by being more flexible when it comes to wage negotiations.

“Over the past five years, public sector employee compensation grew by 7.2% a year on average – well above inflation. Over the next five years, it will need to grow much, much slower.”

This has seen the government and the public service unions meeting to discuss how best to “adapt to the reality that we must do more with less”.

Another cost-cutting measure is the introduction of zero-based budgeting. This is where all expenses must be justified for every new period. It will be piloted in the Department of Public Enterprises and Treasury next year, and then fully integrated into the budget system by the 2023 budget.

Judging from the budget, SA Inc is not in great shape and it will be a while before it can be considered ‘recovered’.

Even so, SA is making some progress like seeing debt service costs revised down by R3.4 billion. This was in part due to borrowing costs being lower than expected.