But Godongwana’s tone hints at his hesitancy to commit to an income grant in the longer term.
By Suren Naidoo 12 Nov 2021  00:01 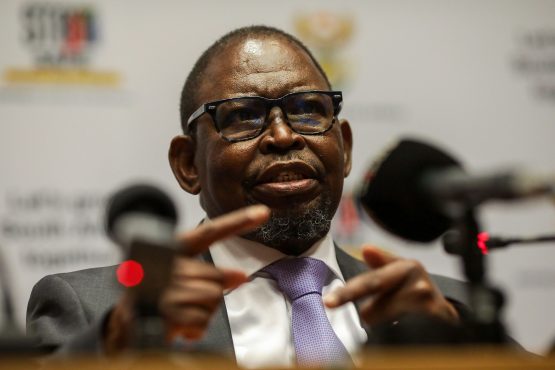 SA needs to be ‘clear and unambiguous on the trade-offs’ it is willing to make, says Enoch Godongwana. Image: Bloomberg

Despite a tax revenue windfall and growing calls ahead of the mid-term budget for the introduction of a new basic income grant (BIG) for unemployed workers, Finance Minister Enoch Godongwana did not give the idea much airtime in his debut Medium-Term Budget Policy Statement (MTBPS) speech on Thursday.

In fact, he did not specifically mention the BIG proposal at all.

Instead, Godongwana reiterated a position similar to that of his predecessor Tito Mboweni, around boosting SA’s economic growth to address the unemployment crisis in the country rather than long-term commitments to significantly increasing spending on social grants.

Read:
Increased R120bn tax collection windfall may not be sustainable
SA seeks to rein in debt, hold off welfare expansion

Following the July unrest that rocked KwaZulu-Natal and parts of Gauteng, government decided to reintroduce the Social Relief of Distress (SRD) grant, which first came about last year to support the poorest South Africans affected by the impact the Covid-19 financial fallout. A third wave of the pandemic this year was an influencing factor in the reintroduction.

The July unrest that included widespread looting, largely in poorer areas of KZN and Gauteng, led to renewed calls for government to introduce a basic income grant.

During his ‘mini budget’ speech on Thursday, Godongwana pointed out that the SRD grant is set to come to an end in March 2022.

While he did not say anything about the BIG proposal, the finance minister pointed out that “details” on government’s “interventions with regards to the social security net will be provided in the February 2022 Budget”.

“The [SRD] grant has benefitted about 9.5 million South Africans. This is over and above the existing social security grants,” Godongwana noted.

“Today, 27.8 million South Africans are social grant recipients. This accounts for about 46% of our population. At the same time, the number of people working has declined, further underlining the critical flaws in our economy,” he added.

He warned that the country’s total spending on “the social wage” is very high.

“This amount has grown from R860 billion in 2018/19 to R1.1 trillion in 2021/22. Around 60% of total non-interest spending annually goes towards housing development, free basic services, employment programmes, health, education and social grants, among other things,” he said.

“Overall, the South African government is acknowledged as having one of the most comprehensive and expansive social security systems in the world.”

“Let me however reiterate that a permanent solution in responding to these challenges is to achieve high and sustained levels of economic growth.”

His tone hints at his hesitancy to commit to a new grant (BIG) in the longer term; however, government could be considering an overhaul of the whole social security system.

Worth also noting is that one of the core messages to come out of Godongwana’s speech was around government’s commitment to fiscal consolidation.

“The MTBPS charts a course that demonstrates government’s unflinching commitment to fiscal sustainability, enabling long-term growth by narrowing the budget deficit and stabilising debt,” he declared.

“Critical to the fiscal path we have chosen is the need to be clear and unambiguous on the trade-offs we are willing to make as a nation. We cannot do everything we want at the same time,” he said.

I’m sure they don’t want to commit to a BIG because they don’t have the cash to do so, given how much they are already handing out every year. Completely unsustainable!