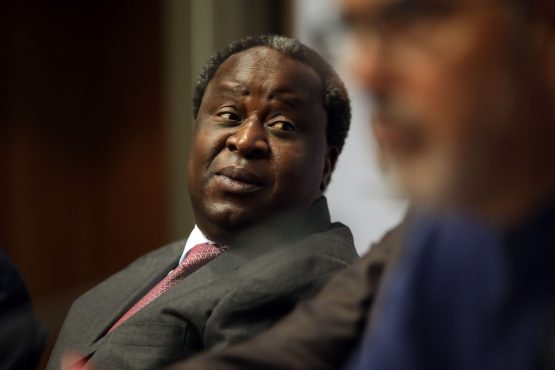 Tito Mboweni is expected to give an update on changes to the Covid-19 relief scheme during his budget speech on Wednesday. Image: Dwayne Senior, Bloomberg

One of the key things business and economists will be awaiting news of during Finance Minister Tito Mboweni’s 2021 National Budget speech on Wednesday is how South Africa’s much-vaunted R200 billion Covid-19 Loan Guarantee Scheme will be overhauled.

Only around R18 billion of relief funding from the scheme has been approved by major banks (excluding direct relief offered by banks) for pandemic-hit small- and medium businesses.

Several sectors, including organised business and labour, have called for a makeover of what was meant to be the biggest cog of government’s overall R500 billion Covid-19 relief and economic stimulus package.

It is the latest organisation to reiterate calls for an overhaul of the scheme, and has suggested further business support measures beyond just “bridging finance” as a stimulus to the country’s economic revival.

The 19-page report, which assesses the effectiveness of the LGS and proposes several “design tweaks” and recommendations, is written by Intellidex’s Stuart Theobald (founder), Peter Attard Montalto and Nolwandle Mthombeni.

They point out that President Cyril Ramaphosa, in his recent State of the Nation Address, “directed National Treasury to look at invigorating” the scheme.

However, they say Ramaphosa “did not provide any specifics”.

Attention will now be on what Mboweni reveals in his budget speech. While Ramaphosa initially mentioned in April last year that the LGS is a R200-billion plan, the finance minister later clarified that the ‘first tranche’ would be R100 billion.

It is unclear whether the full R200 billion for the scheme was in fact set aside. However, with take-up in the scheme being lacklustre and virtually at a standstill presently, Mboweni may well announce tweaks and also redirect the LGS balance (R100 billion second tranche) to new economic relief/stimulus efforts, or even for the funding of government’s Covid-19 vaccination drive.

In its report, Intellidex notes that commercial banks “never committed” to the R200 billion figure and “only signed agreements totalling R67 billion” with National Treasury and the SA Reserve Bank. “The amount [R200 billion] therefore in reality never existed.”

“We understand it was inserted within the cabinet process to back … the full R500 billion [overall package] amount. Treasury’s reluctance to back [the] full amount could be seen in the fact it talked about a first tranche of R100 billion and then only more if needed.”

“The LGS, at R200 billion, was the single largest plank of the government’s R500 billion Covid-19 stimulus package announced in April, yet only about R18 billion of credit has been extended so far,” according to the executive summary of Intellidex’s latest research note.

Challenge is not unique to SA

However, Intellidex points out that this is the “experience” of many countries that have created similar guarantee schemes.

“The initial phase of [the] LGS was effective at providing tail risk cover for banks in that they were protected from substantial default rates should the credit environment have deteriorated. Compared with voluntary credit support offered by banks, LGS has done ‘ok’ in that context, though not in in the context of the headline size announced,” it says.

It notes that lessons from international examples and from inspecting the South African scheme include “that speed, design and incentives are critical”.

South Africa’s scheme “was found wanting on all three elements [partially corrected in July],” it adds.

“The headline R200-billion target was always unrealistic given the size of the small business sector that was targeted,” says Intellidex.

“There are further design tweaks that could improve the performance of the scheme.… These should include reduced suretyship requirements; wider allowed uses for proceeds; increased cover by the guarantee [remove the 600-basis point first loss buffer faced by banks], an explicit budget set for losses in national accounts; an upfront commitment to targeted loan volumes by banks; and, potentially lower interest rates,” it points out.

“However, there needs to be development of quite different schemes that help companies to reduce their financial risk if we are to deliver financial solutions to stimulate the economy rather than bridge finance businesses through lockdowns, as the LGS was designed to do,” it adds.

“To achieve wider stimulus, schemes would need to crowd in offshore and onshore guarantees from development banks,” Intellidex explains.

The research house backs reforms such as Operation Vulindlela, which aims for better coordinated “work across government” as part of overall structural economic reforms for the country.

Specific reforms it cited as part of its LGS assessment include:

“All this is probably too complex to implement in the short run, but amendments can be undertaken so that there can be faster responses next time,” says Intellidex.

“In a constrained fiscal environment, maximum leverage from the private sector to support business (SMMEs in particular) is crucial. The LGS provides the government a path towards supporting the economy through 2021 and on to the recovery, both by reforming the scheme and introducing different schemes that better meet the needs of the economy,” it stresses.

“The existing scheme is largely now dead – both considering the stage of the crisis we are in and the purpose of the scheme,” Theobald, Attard-Montalto and Mthombeni note in the concluding section of the report.

“It is important to keep in mind that the scheme was intended to be a bridge finance tool, rather than broad stimulus one,” they say.

“Debt stimulus is far better achieved through normal monetary policy that lowers the cost of debt.”

“However, future Covid-19 lockdown waves may provide good reason for it to come back to life, in a new form, as part of a wide package of bank-led support,” they add.

They point out that the LGS’s role needs to be “reconciled with the broader objectives” of Ramaphosa’s overall Covid-19 Economic Reconstruction and Recovery Plan.

In line with this, Intellidex made the following recommendations:

So the plan is to get “businesses” that you stopped from operating to make loans to enable them to “survive” something a pool of fools enforced on them?

Most have no idea when these fools will impose some stupid lockdown rule again than will ensure they will never be able to service a loan.

What kind of “business person” takes out a lone that he has now idea how to repay??? Are these even “businesses” that should be in business???

does not matter how one look at it – once borrowed, it has to be paid back in due course

I suspect that if you investigate the R18 billion supposedly lent under any of these schemes, you will find that much of this money went to larger corporations and not to smaller businesses. Despite the guarantees put in place by the government I suspect that the banks will only consider lending money to those entities who have surety cover exceeding the balance by a multiple of 10.

We have no choice but to try and save as many businesses as we can and our banks better get a grip on finding new creative ways to finance loans and debt in this country. If we don’t create jobs this country will descend into anarchy. Our lending criteria is outdated and no longer fit for purpose. Our structured finance deals are similarly outdated. Our risk profiles are completely different to what they were post 1994.

You only have to read about ad duplum laws for example had to be forced on the banks. The practice of home repossessions and the flawed auction process had to be legally challenged and the banks still wont comply, instead they claim they have always had the client’s interest at heart. Same situation with vehicle repossession and the syndicates that control that.

When you are paying 10-15% above prime on a loan your risk is priced in yet they want personal surety in many cases where it should not be required. To our banks you are a faceless number and lending decisions are made by a computer and large lending decisions are made by a committee (the invisible credit committee) and very large loans are done with your ‘friends’ at senior executive level.

No wonder they cannot / will not lend money under the covid funds.

Was it ever alive?