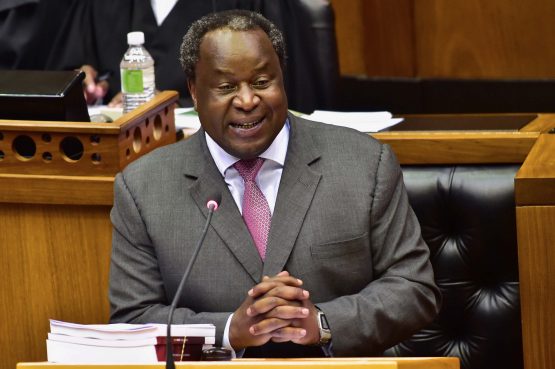 The new tax table indicates that high-income earners will in part subsidise the larger relief given to those who earn less. Image: Elmond Jiyane, GCIS

The much-studied Keynesian model predicts an upswing in household expenditure if government cuts taxes, with higher tax revenues down the line when economic activity picks up.

The tax proposals that decreased personal tax, kept value-added tax (Vat) at 15% and raised the possibility of reducing corporate taxes came as a surprise to many commentators who predicted hefty increases in taxes to plug gaping holes in the government’s budget.

Deviating from his written script, Mboweni mentioned early in his speech that there would be no major tax increases. Referring to forecasts that National Treasury would have had to increase Vat, he quipped: “I don’t know where they got that from.”

The actual changes to tax tables delivered a pleasing reduction in taxes that is set to effectively inject R14 billion into the economy.

“This provides for total individual income tax relief of R2 billion,” says Els. This compares to a potential extra tax revenue of R12 billion if Treasury effected no changes to tax tables as predicted by some.

Els says Treasury officials admitted to participants in a closed presentation preceding the budget speech that they discussed various additional tax increases, but decided against any given the weak economy. 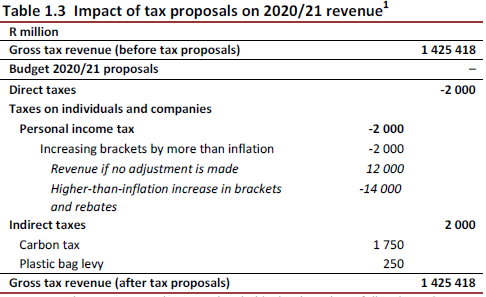 Instead of draining R12 billion out of the economy, the tax relief injects R2 billion extra into consumers’ wallets.

Hopefully, they will spend most of it on pizza and beer.

Selling more pizza will keep restaurant owners in business and secure the employment of their staff, while spending money to buy ingredients will keep the whole supply chain ticking over and secure more jobs. A few extra beers will limit job losses at SA Breweries while the extra 8c in tax on every can will go towards balancing the books.

In his address to parliament, Mboweni mentioned three examples of taxpayers who will pay less tax.

However, a closer look at the new tax brackets show that tax relief was reserved only for people earning up to R500 000 per annum.

The new tax table indicates that high-income earners will in part subsidise the larger relief given to those in lower income brackets.

The marginal tax rate for people earning more than R1.5 million per annum increased from 26.8% to 27.4%.

Mboweni said as much, referring to the progressive tax system in which the rich are taxed more than the poor. The changes in excise duties will probably also hit the rich harder than the middle class.

Brendan Gace, head of Anchor Private Clients, says a family in which one partner earns R50 000 per month and the other R35 000 will be taking home around R600 more per month this year.

“With middle class taxpayers in SA finding themselves rather stretched, the 2020 budget has provided some welcome relief,” he says. “Many homes have been experiencing above-inflation increases in certain big expense items such as school fees, electricity bills and medical aid costs.”

Furthermore, with some good tax planning they will be better off, says Gace. This would include the use of other deductions such as contributions to pension funds, retirement annuities and interest exemptions, as well as medical tax credits.

“The big caveat is that they will have to behave, as sin taxes on cigarettes and alcohol were increased.”

He cautions that the real danger for this middle class couple is the risk of retrenchment in a low growth economy. “The budget speech made reference to low future growth for the next few years and deep cuts in the public sector wage bill. With tough times possibly still ahead, keeping a kitty aside for such rainy day will be a very good idea,” says Gace.

A little of the couple’s tax relief is eroded by the increase of 25c in excise duty on fuel, increasing their total monthly petrol bill by around R100, depending on how much they drive and what cars they own.

Being part of formal employment and being taxed has made the informal market attractive. If money can be “hidden” from the tax man through your side hustle, it’s a welcome boost to income from your main income earning activity. These tax relief only increase income marginally. Its is not enough to change your life materially.

Our government is so obesessed with race and “representation”. Could we please see table 4.5 broken down by race, or will that be “an inconvennient truth”?

It’s clear what the table and the percentages refer to. It’s not clear why the author would misinterpret this information so badly, or why the editors are happy to let it stand.

Indeed – completely incorrect interpretation of the proportions by the author

How low have we sunk when someone earning $33k pa is considered as being wealthy.

Rob the country blind and then act like they’re doing a favour when they throw us back some crumbs. The magnanimity of the criminal class knows no bounds.

I am surprised government has not changed the medical tax credit. SARS itself seems to be on a mission about that element of returns. They must be allocating enormous resources.

Aye Johan but I suspect that this is just to delay tax credits due to the taxpayer. I have hardly ever had a query until I was due a refund. Lease agreements and medical expenses are the standard Kieswetter delaying tactics. New crook same as the old crook?