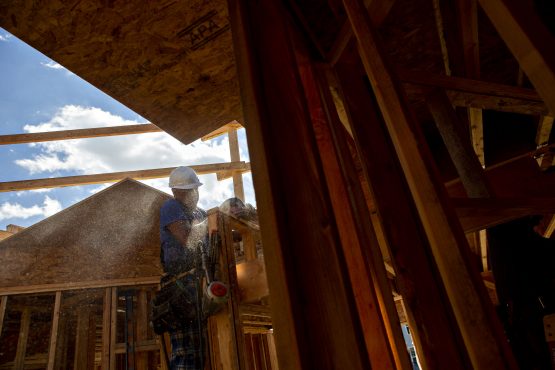 For more than a century, countries have raced to build the world’s tallest buildings with concrete and steel. Now, a quiet contest in constructing tall wooden buildings, from Amsterdam to Tokyo, underlines growing environmental concerns over concrete.

With rapid advances in engineered wood, and authorities relaxing building codes, wooden structures are sprouting across Europe, Canada, the United States, and in the Asia Pacific region.

At 73 metres (240 ft), Amsterdam’s Haut building is said to be the world’s tallest wooden residential tower.

Vancouver plans a 40-storey building it says will be the world’s tallest, a title also claimed by Sumitomo Forestry’s 350-metre skyscraper in Tokyo.

“The interest is definitely being driven by environmental concerns – the amount of damage we’re doing with concrete is unbelievable,” said John Hardy, a sustainability expert in Bali, Indonesia.

“Bamboo and wood are carbon sequestering materials. So the other advantage of building with them is that you will look better to your children and grandchildren,” he said.

Construction of office towers, bridges, airports and highways is booming in developing nations across the world.

The manufacture of steel, concrete and brick accounts for about 16% of global fossil-fuel consumption – and up to 30% when transport and assembly of the materials is considered, according to the Yale School of Forestry & Environmental Studies.

Concrete is also blamed for rampant sand mining, which has damaged the environment and hurt livelihoods in Southeast Asia.

In addition, an abundance of concrete has worsened urban flooding, and made cities hotter, environmentalists say.

Each cubic metre of timber used in construction stores a carbon equivalent of over 900 kilograms (2 000 pounds) of CO2 emissions, meaning a reduction of 135 kg-360 kg of CO2 emissions per square metre of floor area, said Buchanan.

Innovations such as glue-laminated timber, laminated veneer lumber, and cross laminated timber – strips of wood glued together to make beams – are creating more uses for structural timber in residential and commercial projects, he said.

Structural timber is much lighter than concrete, cuts risks in earthquakes and can “create far more attractive interiors”, he said.

A 54-metre wooden building in Vancouver that was thought to be the world’s tallest was quickly overtaken by an 85-metre tower in Norway.

Amsterdam’s 73-metre Haut will begin handing over its 55 apartments from 2021. Vancouver’s planned 40-storey building will include 200 flats, while the 70-storey Tokyo tower is slated to be completed by 2041.

“Wood is ideally suited for lower rise buildings, but it is really exciting that engineers and architects worldwide are experimenting with the use of wood for taller structures,” he said.

Such buildings are particularly suited to cities, where buildings are constantly being adapted and refurbished for new uses, said Eleena Jamil, a Malaysian architect who has designed residential and commercial structures with bamboo and wood.

“Cities go through fast-paced changes. The advantage of using bamboo and timber is that they are easy to dismantle, reuse and adapt, compared to concrete,” she said.

But with excessive logging and deforestation already a problem in many Southeast Asian countries, it is important to balance demand for wood with “tighter regulations and more efficient management of forests,” she cautioned.

Under pressure to act on a material that produces 7% of the world’s carbon dioxide emissions, cement manufacturers also have been experimenting with lower-carbon concrete.

Authorities in several US states are exploring the use of carbon-injected concrete that will use less cement while trapping carbon emissions.

Meanwhile, policy initiatives are hastening the move to wood from steel and concrete.

In New Zealand’s Christchurch, where authorities have encouraged a more environment-friendly approach after a 2011 earthquake that flattened much of the central business district, timber is a favoured material.

The city, which creates about 600 000 square metres of new buildings each year, has the opportunity to store the equivalent of 30 000-200 000 tonnes of CO2 emissions per year if all new buildings were made of wood, said Buchanan.

Regions including British Columbia and Tasmania have adopted a “wood first” or “wood encouragement” policy that requires building designers to show that they have considered wood as an option.

Japan has a law to promote use of wood in public materials.

Such policies are “probably the most effective to encourage greater use of wood as a construction material, especially if supported through a carbon encouragement grant”, Buchanan said.

But the decision to use wood must be a considered one, said Amy Chow, a designer in Hong Kong who curated a show on wood, paper and bamboo.

“You can’t start off saying: let’s build this out of wood,” she said.

“It has to be the culmination of a process to determine what works best in that context, what is most sustainable, cost effective and efficient,” she said.