The Van Eeghen Group was founded in Amsterdam in 1662 and the family still owns the business.
Tom Metcalf, Bloomberg 7 Jul 2019  00:46 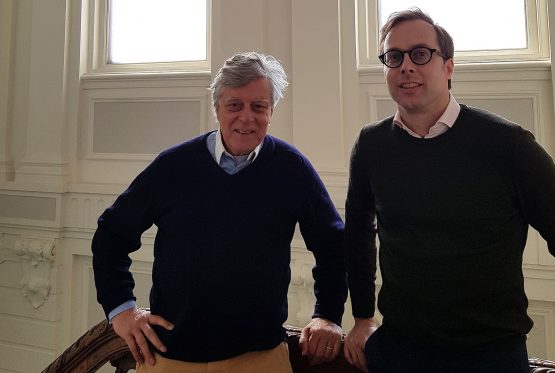 Managing director Jeroen van Eeghen (right) hails from the 15th generation of the dynasty, having taken over in 2012 from Willem (left), a cousin of his father. Picture: Tom Metcalf, Bloomberg

Owning a company with 357 years of history brings some perspective.

The Van Eeghen Group was founded in Amsterdam in 1662 and the family still owns the business, which has reinvented itself over the centuries. It traded wool and wine, helped finance the newly established United States of America and moved into coffee, cocoa and dehydrated vegetables and spices after World War II.

Its long history features plenty of hits and misses, including a bet on US immigration that included the purchase of about 5.5 million acres in New York and Pennsylvania before unloading the real estate for a small profit by 1840 (the family concedes it may have sold a bit too early).

Today, it specialises in sourcing specialty ingredients such as plant extracts for products like infant food and nutritional supplements, which it set up in 1991. Managing Director Jeroen van Eeghen, 41, hails from the 15th generation of the dynasty, having taken over in 2012 from Willem, 70, a cousin of his father.

The pair discussed their view of family businesses, succession and the challenge of balancing tradition with progress in an interview with Bloomberg at the company’s Amsterdam canal house headquarters in April. Their comments have been edited and condensed.

What’s unique about your company?

Jeroen van Eeghen: In general, one thing which is special about family companies is I don’t think we need very opportunistic people. Of course we are dynamic, but you have to have a bit of feeling for the long term and also appreciation of employees and things like that.

How important is growth versus stability?

JVE: If you go horizontal at one stage you will disappear. We have been growing quite aggressively over the last few years. So don’t think that we are just holding hands here. Sales have almost tripled compared to 2013. But maybe I have some reason that next year we will not really grow. Then I will explain to the board and it will be fine — if I have a good reason. There will be no one at the shareholder meeting — if you have a good reason for it — who will say, ‘Why are we not growing at 10% this year?’

How does the family plan for succession?

Willem van Eeghen: Succession is different in every generation. The way we handled the hiring of Jeroen was excellent. We outsourced the hiring process. In 2011 the supervisory board sent a letter to the broader family and said I was about to retire in a few years. We also said if no qualified candidates presented themselves, we’d look outside the family. People had to send a cover letter and CV. They made a committee with an external head hunter with an HR person, and they did the preliminary assessment.

Why did you shift to functional ingredients?

WVE: We were doing coffee and cocoa and I didn’t like the trade. The market had changed in such a way that either you’ve got to do it on a large scale like Cargill does or you don’t. Otherwise you’re going to get stuck in the middle somewhere, you’re going to be squeezed out.

We needed to do something else and I really thought about something which required more knowledge in a certain way so that the entry for newcomers wouldn’t be easy. And functional foods fitted in very well there. I was doing some work in Japan and I saw supplements in shops and I thought this is something really new.

What does 357 years of history bring?

JVE: Perspective. Around the 1900s you could argue we were one of the most powerful companies in the Netherlands. And I spoke to a historian, and they said around 1800 we were also one of the biggest houses in America. In between there was a dip. If you look in these longer terms you can keep successes and failures in perspective.

Why has van Eeghen survived?

WVE: It helps that the family aren’t dependent on the dividend. You have a lot of family companies where shareholders have become more dependent on dividend pay and if it’s a bad year they have to sell their house. I’ve had a shareholders meeting where we declared a dividend and our shareholders said, “We don’t need that much, put it in your reserves.”

WVE: Suzanna Block was from the second generation. Her husband died at an early age. She had three sons but when her husband died, her sons were too young to take over. So she took over. It was highly unusual for a woman to take over in those days. It was a male-dominated, macho world. She did a lot of the preparatory work for going to the West. The eldest son eventually took over from her but then he died and she took over again. So she took over twice. She saved the company. They often say that family companies don’t survive two or three generations. That was nearly the case for us.

SA was discovered in 1652 – pity we didn’t have a single family to run the country – it could have been in pristine condition today, but, unfortunately the ANC came into power and screwed the company up

You forgot the NP that originally destroyed it since 1948. There’s no way to fix the damage that was done by a regime that was pure evil as the legacy of apartheid will unfortunately be forever ingrained in our society.

It is a tough life but somebody has to do it, we thank you for centuries of colonial exploitation and misery. If your seventeeth grandfather had not gone for slavery you would be sticking fingers in dykes, but hey : capitalism works really well for some

So, what was the guy seating at the beach when those early Europeans who arrived in 1652 (Van Riebeeck, I presume you refer to) doing in South Africa? Was he there before Europeans so that the Europeans can come and say, ‘we discovered you’? How do you ‘discover’ people who have already found the place before you? It is this kind of colonialist language and mindset that betrays even the best interest(s) of descendants of colonists. Its arrogant and ignorant and it can’t be cured with simple education. GTFOOH!!!

Judging people who lived 300+ years back is rude and ignorant of how things happened back then. Economies and laws were completely different then, change is continuously happening. “Online shopping” is the new deal today (and many other new trends), and some companies will not survive. This Dutch family company adapted to the changes over centuries, what a remarkable achievement.

You have to wonder about the sanity of your average South African. Here’s an article about a company that stayed in business for 350 years in *another* country in the *northern* hemisphere (my emphasis).
Commercial organisations with this kind of longevity are rare. It’s usually only universities that can boast a 300+ year existence. You have an interesting exception here.

Of topic. To judge others on color of skin is utterly disgusting an stupid. Criminal, if ownership of land plays a role. Today see former victims doing their out most to proof me wrong. They have enrich themselves beyond dreams. Never enough as motto. Embarrassment lacking, the result is a crumbling country. With informal settlements as proud achievement.

Going back to yesteryear you will find that large areas in Europe were colonized by the Celts, Germanic , Romans, Greek, Vikings, Arabians, Turks and many others all of them leaving constructive footprints evolving Europe in what it is today. Why is it so hard to say the same for Africa.