The Golf once saved Volkswagen. Now VW wants to save the Golf 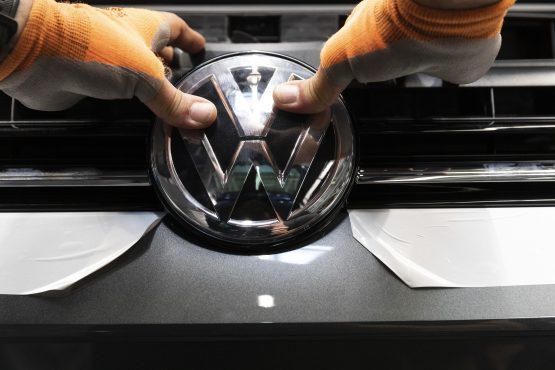 A VW badge is attached to the radiator grille of a Golf series vehicle at the Volkswagen manufacturing plant in Zwickau, Germany. Image: Alex Kraus/Bloomberg

Two cars supported Volkswagen’s decades-long ascent to the top: The rotund Beetle, which laid the foundation for the company as a people carrier; and the Golf, a boxy hatchback that pulled VW from economic doom in the 1970s.

The Golf went on a record-breaking run of more than 35 million units sold to date. But in the 45 years since the first one rolled off the line, the ground has shifted under Volkswagen, particularly in recent times.

The diesel crisis that erupted four years ago cost the company 30 billion euros ($33 billion) and counting. That forced VW into a radical rethink of its strategy and portfolio, giving birth to an unprecedented push into electric cars that will sit alongside heritage models like the Passat, Jetta and the Golf. And the insatiable thirst for SUVs has dented the Golf’s internal standing as the undisputed sales king: for the first time last year, the compact Tiguan crossover eclipsed the Golf as VW’s bestseller.

“The Golf is still one of the most important products for VW and still has high symbolic value, but it doesn’t have the critical significance of the past any more,” said Bankhaus Metzler analyst Juergen Pieper. These days, the car contributes about 6% to 8% to group profit at best, compared with at least 20% two decades ago, Frankfurt-based Pieper estimates.

Those challenges notwithstanding, VW still sees a future for the Golf, now entering its eighth iteration. On the evening of October 24, VW will unveil the latest version, promising a car that is “more digital and more connected than ever before.” Sales start in December, and VW has pooled production of the vehicle at the hulking factory sitting next to its Wolfsburg headquarters, a bold statement that the Golf remains a cornerstone of its portfolio. Success is pivotal to keeping a site covering an area the size of Monaco humming along.

In-house competition doesn’t stem from SUVs alone. In two weeks, a VW outpost in Zwickau, three hours away from Wolfsburg, will begin churning out the ID.3, a fully-electric hatchback that sits in a similar bracket to the Golf in terms of size and pricing.

VW officials insist the ID. 3 attracts a younger, more tech-savvy clientele than Golf buyers.
But the ID.3’s arrival might still limit the allure of the new Golf, which comes in a hybrid version but is still principally built around a traditional combustion engine.

The Golf is emblematic of the dilemma facing the wider car industry: how to chart a path into an electric future without choking off combustion cars that finance the undertaking. In VW’s case, that’s a $50-billion outlay to develop at least 70 electric cars across the group in coming years, marking the most aggressive and costly endeavor of its kind.

The new Golf hits showrooms at a time when global demand for new cars is on the wane. Global vehicle production is forecast to fall by about 2% in 2020, according to JPMorgan estimates, amid persistent uncertainty over Brexit, swirling trade woes and geopolitical tensions.

Read: VW to take its Uitenhage plant off the grid

To keep the Golf fresh even after its almost half-century production run, VW has upgraded the car with technical gadgetry. There are larger touch screens and sophisticated drive-assistance offerings. Then there’s interior ambient lighting, and a cloud-based customisation option for the infotainment system.

The VW has trimmed costs on the golf — previously a showcase for the company’s engineering excesses — by slashing slow-selling variants and reusing 80% of already existing assembly tools from the current version. The company was able to cut the time it takes to make a single Golf by about 1 hour, using more standardised machinery and processes, trimming country-specific model variants and improved logistics. Gone are the days when buyers could choose from dozens of steering wheels or fabric designs that promised a high degree of customisation, but at the expense of complexity and cost for the manufacturer.

“We have never viewed it as a key profit driver for VW group given its production complexity and an exhaustive array of options,” Bloomberg Intelligence analyst Michael Dean said. “The new Golf’s earnings potential has improved, but its importance is reduced by the continual shift into SUVs and first deliveries of the ID.3 and further electric vehicle launches.”