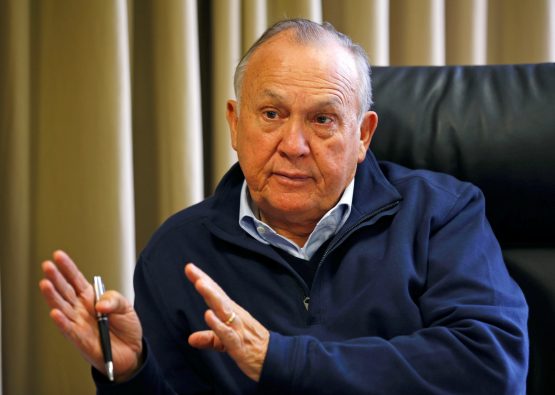 Christo Wiese has begun unloading his stake in Shoprite shares, with sales totalling some R2.15 billion over the last three working days. This could be at the request of banks who have lent him as much as €1.1 billion to participate in various Steinhoff share sales.

The table below summarises the Sens put out just before the market closed on Tuesday:

It appears that the shares could be getting sold to meet obligations to lenders. Bloomberg reported last week that Wiese had pledged as much as 628 million Steinhoff shares to a consortium of banks lending him money to buy more shares in the company.  As of last week he was attempting to negotiate a standstill agreement that would suspend the sale of shares by the likes of Bank of America, BNP Paribas, Goldman Sachs, and JP Morgan, until next year.

But local bank Firstrand/Rand Merchant Bank has been lending to Wiese taking Shoprite shares as collateral. In an interview conducted with CNBC Africa’s Fifi Peters on Monday December 11, RMB CEO Alan Pullinger confirmed that the bank has three types of exposure to Steinhoff. Firstly, to Steinhoff and group companies to provide working capital type facilities. Secondly, through facilities to Steinhoff Africa Holdings, which are “very well covered.” And thirdly, the bank has exposure to the Chairman (Wiese) through his investment company, and, crucially, states Pullinger, “there we are very well covered with Shoprite shares.”

It is therefore quite plausible that Firstrand/RMB would be the seller of the Shoprite shares yesterday, given that if it was lending to Wiese to buy more Steinhoff shares, the security in that loan has essentially vanished as the share price has collapsed from approximately R50.40 two weeks ago to yesterday’s R7/share (-86%).

Moneyweb did reach out to a Shoprite spokesperson on Tuesday evening but had not received a response at the time of publication.

But the sale will hardly put a dent in Wiese’s Shoprite shareholding. In Shoprite’s 2017 annual report, Wiese is listed as owning some 101.3 million shares equivalent to 16.8% of the company, which means this sale equates to roughly ten percent of his holding in the retailer.

So if I read your numbers correctly, he is basically bankrupt. Oh no.

It is impossible to figure out what Wiese is worth. He does not have a clue himself. Markus Jooste was the only one that made calculations and he left the building. It will take the best auditors in the world weeks or even months to figure out what Steinhoff is worth, while the market basically figured it out in 3 days.

He may be part of the whole corrupt debacle but he is not stupid and definitively not bankrupt ……MUST have money in offshore accounts that only he knows of.

Rough Calculation Wiese listed Assets only.
Invicta 1,4 bill
Shop 20 bill
Brait 7;5 bill
Stein 6 bill @ R 7 per share currently
Total R35 bill
Transhex ,Stellar not included.
I was under the impression that he borrowed 1;6 bill € (R23bill) and pledged 3;2 bill€ of value against his steinhoff shares last year.
If that is the case he should be fine.

The one thing that won’t appear on the balance sheet is the value of lost reputations. Wiese and all his buddies will have a really tough time recovering their reputations after this, if ever.

lost integrity can NEVER be regained.

Probably nil – unless he’s messed up by holding them in different entities, I think you can safely assume that he’ll have plenty of CGT losses from which to offset any gains on the Shoprite sale, and then some!

People don’t understand how difficult it is for rich people! AND you need R100,000,000 in reserve to stay out of jail. Shame!

I know exactly how he feels. It’s really tough at the top. Ha ha

Its tougher at the bottom where we have to deal with three zeros, or more, less.

It get tough when you are down to your last R100m

He haas sold 100m Steinhoffs (so far) to meet margin calls, his loss on that will be more than enough to cover the gain on the Shoprite shares…

What if they’re held under different legal entities.

I feel sorry for the man. This Christmas will be a subdued affair in the Wiese household, shame.

every cloud has a silver lining. I suspect if you are in the market for expensive real estate in the Skelmbosch/Hermanus areas, 2018 may be your lucky year.

Quiet Christmas for Wiese and Jooste. I think they both just dropped off the Rupert braai list this year.

How come banks don’t lend us money to buy shares – how else can we become billionaires – lol – wish i could have understood quantitative easing back then.