My notes were used as toilet paper – Porritt 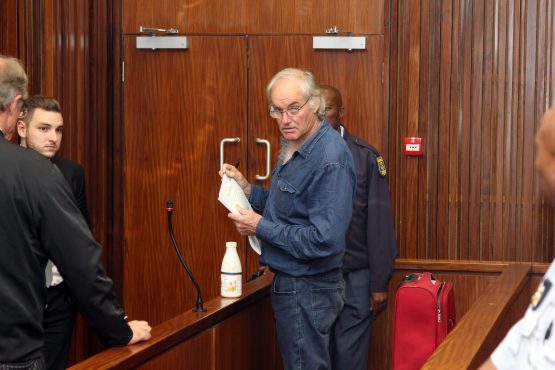 Tigon-accused Gary Porritt has been ordered to complete his cross-examination of former Progressive Systems College (PSC) CEO Jack Milne by Wednesday, more than three years after Milne took to the stand.

The application for presiding Judge Brian Spilg’s recusal will however only be heard next year.

Porritt and his co-accused Sue Bennett are on trial facing more than 3 000 charges of fraud, racketeering, and contraventions of the Companies Act, the Income Tax Act, and the Exchange Control Act.

These relate to the collapse of JSE-listed financial services group Tigon, around 2001. Porritt was the CEO and Bennett a director of the group, which was the best-performing share on the JSE at the time.

Read more on the court case:

Tigon underwrote Milne’s investment fund, Progressive Systems College Guaranteed Growth (PSCGG). Milne earlier testified that PSCGG was a scheme concocted by himself and the two accused that set out from the beginning to defraud investors.

He earlier admitted to his role, entered into a plea and sentence agreement with the state and served a term in jail as a result.

He has been on the stand since late 2016, but his testimony has been interrupted repeatedly by, among other things, an enquiry into Bennett’s health, an enquiry into Porritt’s failure to attend court (which ended in his incarceration) and the testimony of forensic expert Professor Harvey Wainer.

Both accused are without legal representation, claiming they cannot afford to appoint lawyers. From time to time Porritt however has access to a legal team, which he says is decided by Attorney Frank Cohen, and his estranged wife and children in their capacities as trustees of various trusts.

The state has argued that he uses legal representation or the lack thereof as a trial strategy.

On November 13 Spilg heard an application by Porritt to have the cross-examination postponed.

He tried to impress upon Spilg the difficulty of preparing for it in jail. Porritt has been held in the Johannesburg prison, also known as Sun City, since June 2017 when he contravened the conditions of his bail by failing to attend court.

He described the pressure he was under, having to redraft a replying affidavit in his application to the Supreme Court of Appeal (SCA) for the reconsideration of the refusal of his leave to appeal application against the withdrawal of his bail. In this matter he is represented by counsel, but he “did not like” the papers they drafted and had to do it all over from scratch, Porritt stated.

He also had to draft an application for Bennett to visit him at the legal facility in jail by November 11, but was unable to complete it in time.

He then started looking for his notes from his earlier cross-examination of Milne, which was halted on November 5, 2018 “due to my spinal injury”.

Porritt described how he stores his notes under his bed and those of six other inmates, but due to a scarcity of toilet paper in prison, the notes are often put to other use. “Well, any paper is getting used for toilet paper because when you have 50 people in a cell with no toilet paper it is a problem, M’Lord,” Porritt said.

Spilg reminded Porritt that he was offered a single cell, but he responded that that is “like asking a turkey to vote for Christmas in my state of health” and won’t solve the lack of enough storage space.

Spilg would not accept Porritt’s excuses for failing to secure the crucial documents or make a copy for safe-keeping elsewhere.

Porritt said he battles to read the court transcripts and refrains from whining “every time I have a problem”. He pointed out that he proceeded with his cross-examination of Wainer despite suffering from boils and being on 15 different antibiotics.

Porritt listed his medical issues and stated that his fair trial rights will be jeopardised unless the trial is postponed. He denied trying to delay proceedings.

State Prosecutor Advocate Etienne Coetzee pointed out that the prison authorities earlier made storage space available for Porritt, which he failed to utilise. He told Spilg: “And the irony of the situation above everything is every single time Mr Porritt must question a witness, then the toilet paper excuse comes up. I have lost my documents. I do not know where I was.”

Porritt denied that storage was arranged and accused all involved with charges of fraud and perjury.

Spilg cautioned Porritt not to threaten the court with a mistrial unless he gets the postponement he’s seeking.

He then ruled that the trial would continue on November 26 and 27 for Porritt to complete is cross-examination.

“He is at liberty to do what he likes on those days, but provided it is relevant to the cross-examinations. He may not abuse that time that is given to him. If he does, his cross-examination will be promptly terminated by me.

He will complete that cross-examination provided it is relevant, meaningful and it is not an abuse of the trial process.”

The state will have the opportunity to re-examine Milne on November 28.

Is this turkey, apologies to Christmas, not so used to jail, that the best thing now would be to just leave him there?

When (and if) the Steinhoff boys go to court, expect the same old same old tactics. We’ve even seen them from our former president Jacob Zuma.

The SCA and the Department of Justice is at fault here, for not formulating clear rules and backing the judges in the High Courts, to prevent these professional time wasters, wasting tax payers money.

OMG – again the carousel at play. Stick to your guns on this (please) Judge Spilg. Toilet paper!!! This doesn’t even appear as an excuse from junior school miscreants.

Maybe the next dose of medication (after the boils and 15 different antibiotics) should be via the SPCA (note – not the SCA) for euthanasia???

I agree but euthanasia is to good for him.

He sounds like a madam and eve joke. next thing is the dog ate my homework (court papers) why does he refuse a private cell??? because then he will not have an excuse.

Yeah, but then he will be gone / off the scene…

This trial is a joke. The judge should recuse himself and some one like Justice Nugent be appointed to clean up this trial, I mean Farce.

If the judge recuses himself – the the whole trial must start afresh.

To be hones, Porritt’s notes DESERVE to be used as toilet paper.

While respecting the rights of accused, when scum like Porritt, Bennett and Zuma abuse the courts they should face extra penalties. “Justice delayed is justice denied”

Yup, there should be a limit as to how many times one can appeal / come up with excuses!

Abuse, frustrate and delay court processes seems the order of the day.
… particularly with individuals involved in Corporate Fraud!

Courts really need to clamp down on the people that are abusing the system!

What a load of BOLLIE this all is!!

Time to have a broader interpretation of the law for those that waste the courts time/use delay tactics that have no foundation. All left to the residing judges discretion.

This case is yet another nail in the coffin that is supposed to be justice?

Toilet paper for the arse that he is!

Can’t help but wonder how far Porrit will stretch this case. Reckon he could’ve been out by now if he owned up to it… Am I wrong?