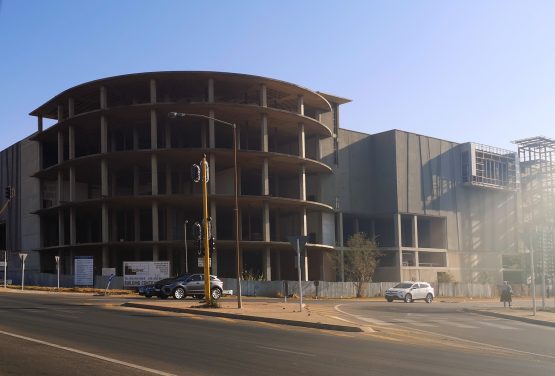 The half-built Villa Retail Park: a tombstone of the costly investment scheme and one of the biggest eyesores in Pretoria. Image: Moneyweb

The resumption of the Independent Regulatory Board for Auditors’ (Irba’s) disciplinary hearing against the former auditors of the failed Sharemax property syndication scheme was adjourned early on Monday following defence objections to the evidence to be presented by a witness.

The hearing previously convened in March 2020 but was brought to a premature temporary halt by the Covid-19 pandemic.

Mike Maritz – counsel for the three audit practitioners facing a total of 413 improper conduct charges related to Sharemax – objected to the type of evidence Freddy Fobian would be giving at the hearing.

Fobian, a former Irba investigator who is currently working as a forensic accountant at the UK Financial Reporting Council, was not called as an expert witness.

Maritz said Advocate Kate Hofmeyr, appearing for Irba, has made it perfectly clear she wants Fobian to identify documents that underpin or support or are relevant to particular charges being faced by the three audit practitioners.

“This witness [Fobian] then becomes the arbiter of what is relevant or what underpins or what supports a particular charge. He can only do that if he expresses an expert opinion,” said Maritz.

“It brings into play expertise and he [Fobian] is not called as an expert. It is no answer to say that he will only identify documents that support or underpin the charges, but what about the other documents which she [Hofmeyr] will not refer to and has excluded because they do not suit the conclusion or the inference?

“All of that brings into play a value judgment by the witness to say a document is either relevant, or supports or underpins or not. In our view it’s entirely inadmissible,” he said.

“The mere fact that we take this committee through the documents that underpin each charge cannot in and of itself be prejudicial to the respondents in any way,” she said.

Hofmeyr stressed that she will not ask Fobian questions that solicit opinion evidence or for conclusions.

“But it is very important that this committee has an opportunity to go through the bulk of these charges.

“They are lengthy, they are detailed and there are documents that are relevant to each of them that should be properly placed before you.

“It is our submission that he [Fobian] should be permitted to do so,” she said.

Hofmeyr added that she was doing this against the threat by the three audit practitioners who have indicated to the disciplinary committee that they have not yet committed to testifying at the hearing.

Advocate Anthea Platt, chair of the disciplinary hearing, requested both Maritz and Hofmeyr to provide the committee with written submissions by 16:00 on Monday relating to Fobian as a witness.

Platt said she did not want the hearing to be interjected all the time, resulting in a 30-minute debate to deal with the objection.

“That will just mess up our record completely and it will just be a whole lot of legal argument as opposed to trying to hear the witness testify,” she said.

The hearing will resume on Tuesday when the committee will give its ruling on the objection.

They were all directors of ACT Audit Solutions Incorporated at the time when they allegedly committed the offences, while Van der Merwe was also the managing partner of the firm.

All three previously pleaded not guilty to all the charges against them.

He said what started out as a professed brief recap of Hofmeyr’s earlier opening statement last year “has now transmigrated into a lengthy exposition of all new material that by no stretch of the imagination is a recap at all” and is new.

Maritz added that much of what Hofmeyr has said did not even find traction anywhere in the charge sheets, notably her reference to Government Notice 459 on public property syndications.

“We are not going to trial in a manner that will amount to a trial by ambush,” said Maritz.

“This appears to us to be a substantial deviation from the charge sheet and the ambit thereof so we are raising that as an objection.

“We are not going to permit an extension of the ambit of the charge sheet from our side,” he said.

The three important legal instruments referred to by Hofmeyr were:

– The Commercial Paper Notice in Government Gazette 2172 in 1994 that permitted companies to issue commercial paper without needing to be registered as a bank;

– Government Notice 459 published in 2006 issued by the Minister of Trade and Industry, which required the promoters of public property syndication schemes to make certain prescribed information available to potential investors in such a scheme; and

– The provisions of the 1973 Companies Act required a prospectus to adhere to the specifications of Schedule 3 of the Act, which required a particular report to be provided by the auditors of the company that was issuing a prospectus.

Hofmeyr admitted that she did not previously traverse the detail on these three legal instruments, but they were flagged because they are certainly among the charges the three practitioners face.

She said there is no debate that Government Notice 459 is of significance in the case.

“That is a charge about an unlawful act and the law which governs the unlawfulness is Government Notice 459,” she said.

Hofmeyr said the auditors in this case also faced charges because they failed to include reports as required in terms of the 1973 Companies Act.

Anyone in need of a tame auditor?

After what has been going on a Sharemax then Nova, with shareholders being stripped of their voting rights, exorbitant salaries for the people entrusted to steer the rescue vehicle and then the latest spate of developments, I really feel bad for these people and hope that a judge can force the trustees to pay back the money they fleeced

Too many schemes and scams in SA.government doing nothing about it

Taking longer than Zuma to get going…..