Defence wants to know why Bobroff settlement was signed….
By Antoinette Slabbert 24 Mar 2017  00:34 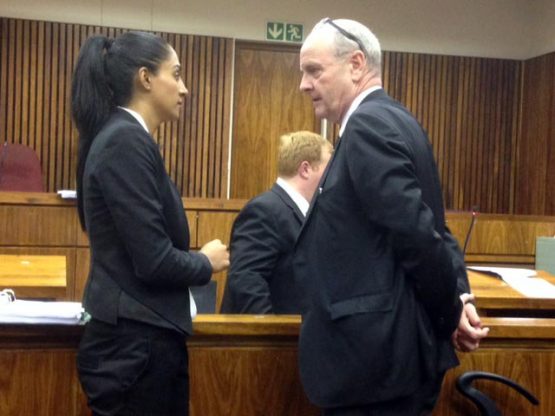 The complainant in a kidnapping case against private investigator Paul O’Sullivan and his associate Melissa Naidu, on Thursday told the court that O’Sullivan told her to “act normally” as she accompanied the two of them to an unknown destination.

O’Sullivan and Naidu pleaded not guilty in the Randburg Regional Court on charges of kidnapping, extortion and fraud.

Cora van der Merwe – who worked at Bobroff’s legal practice as a legal costs consultant and for a while as a candidate attorney – laid the complaints against the accused, following events on October 13 2014 when they interviewed her as part of an investigation on behalf of Bobroff to find out who leaked information from his offices.

Van der Merwe was one of the key whistleblowers whose disclosures led to several court rulings against Bobroff and his son Darren, concerning overcharging clients and their eventual striking off of the Roll of Attorneys in December.

She testified on Thursday that she became aware of systemic wrongdoing soon after she started working in the practice’s costing department. Journalist Tony Beamish, who then wrote for Moneyweb, introduced her to Advocate Schalk Van der Sandt, to whom she made a protective disclosure about the unlawful conduct.

Van der Merwe on Thursday completed her evidence in chief. She told the court that O’Sullivan told her to “act normally” and speak to nobody when she moved with them from Bobroff’s offices to another location in Sandton, where she was going to make an affidavit O’Sullivan required from her.

O’Sullivan had earlier informed her that he was acting on Bobroff’s mandate and investigating the source of leaked “intellectual property” belonging to Bobroff. Read more here.

She said Naidu stayed by her side all the way and even sat next to her at the back of the 4×4 vehicle O’Sullivan drove.

She said on the way she called Van der Sandt secretly, but he could not talk. She sent text messages with the words “Help me!” to Beamish and another attorney, Anthony Millar whom she had never met but was at the top of her contact list.

Beamish also contacted Van der Sandt. He phoned Van der Merwe after the group arrived at the location in Sandton, and insisted on speaking to O’Sullivan. The two men screamed at each other and she could hear Van der Sandt telling O’Sullivan he had kidnapped her and should take her back to Bobroff’s office.

O’Sullivan told Naidu to take Van der Merwe back without her having signed the affidavit. On the way, Naidu once again told her to think of her children and reconsider signing the affidavit that would have contained a list of the documents she’d leaked to Beamish.

O’Sullivan earlier told her that he had a watertight case of theft against her and promised her indemnity from prosecution if she confessed and helped them prove that Beamish was in possession of stolen documents. If not, he said she would sleep in jail and wouldn’t see her children again, Van der Merwe testified.

Back at the office, the office manager Natasha da Costa told her to pack her belongings, go home and never come back. A draft affidavit was put to her with a list of documents that she supposedly leaked. She was expected to complete the list and sign the affidavit, but she refused to do so without consulting her counsel.

Three days after the events she laid a complaint with Colonel Marais of the Hawks, to whom she also made the protective disclosure about the unlawful conduct at the Bobroff law firm, Van der Merwe testified.

Marais put her statement in a bag with her protective disclosure under a case number of the Rosebank police.

Only after the Bobroffs fled did the Hawks contact her again and Marais told her that the kidnapping case should be opened under a different case number. The current investigating officer, Captain Ngwako Mokobi, came to see her and made notes as she told him about the events. He fell asleep during the interview and later left with his notes, she said.

During cross examination, Advocate Zirk Pansegrouw – representing O’Sullivan and Naidu – asked her whether she always tells the truth and whether she would lie for her own benefit. She said she tries to tell the truth and asked what benefit he was referring to.

He confronted her with the lie she’d told O’Sullivan when she initially denied sending the emails he showed to her on the fateful day. She said she was scared, O’Sullivan was screaming at her and she was fearing for her children’s safety.

He asked her why she only laid charges relating to the events in 2016. She said she complained to Marais three days after the events and expected him to investigate the matter.

He doubted her version that Mokobi fell asleep and asked why an officer with 29 years’ experience would do that.

He also asked her about a settlement agreement she signed with Bobroff during her disciplinary hearing on November 30 2016. The document contained, among other things, an undertaking that she would drop all charges against Bobroff employees and O’Sullivan and a statement that her allegations around the kidnapping were unfounded. She said she was told her signing it would secure her November salary.

Van der Merwe added that she signed it on the advice of Van der Sandt, who attended the hearing with her, despite many misgivings. She said the hearing continued from early morning until 20:30 at night without a lunch break. She did not have any food, which was an issue in light of the blood sugar condition she suffers from. She was also worried about her autistic child who becomes agitated in her absence and was under severe financial pressure since Bobroff had failed to pay her salary since September.

Pansegrouw doubted her version that Van de Sandt advised her to sign the document “and just get out of here” despite her misgivings.

Van der Merwe said she wrote an email to Bobroff the next morning to withdraw her agreement to the settlement. She later took the matter to the CCMA and won an arbitration award that had Bobroff pay her a substantial amount.

The case was postponed until June 26, when cross-examination will continue.

O’Sullivan acting for Bobroff? He always promotes himself as a good guy and I never realised that he happily works for any crook who is prepared to pay him.

Hey Paul, you really, really need to choose your clients a bit more carefully. The Bobroffs’ stink will cling to you and ruin your reputation.

Too late for reputational risk. This Mellisaa is just as dodgey.

Ronald and Darren Bobroff found guilty of contempt of court

Ronald and Darren Bobroff found guilty of contempt of court