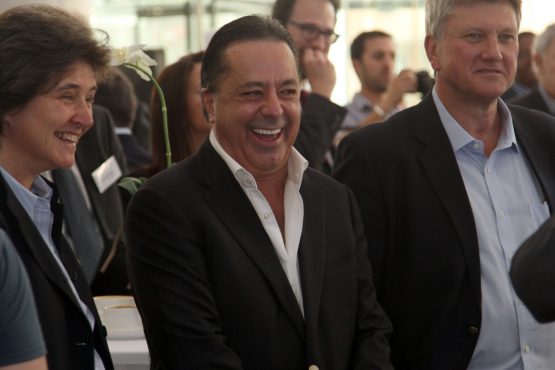 The cat that got the cream … a trust within a trust hiding behind a professional trust provider allegedly enabled some of Markus Jooste’s secret deals to take place. Picture: Moneyweb

Former Steinhoff CEO Markus Jooste benefitted from undisclosed property and share deals with the company he headed over a period of 18 to 20 years, according to two investigative journalists who published explosive allegations last week.

This means the corporate fraud could have stretched back all the way to Steinhoff’s 1998 listing on the JSE.

They further allege that the Steinhoff family has similarly been benefiting all along through a trust set up by Bruno Steinhoff around 1997.

The report by Financial Mail journalist Warren Thompson and Craig McKune, who works for investigative journalism unit amaBhungane, comes almost a year after the share price of Steinhoff collapsed spectacularly upon Jooste’s resignation on December 5 last year. This followed the refusal of Steinhoff’s auditors to sign off the group’s financial statements and the group admitting to accounting irregularities of unknown magnitude.

Read: The scale of the Steinhoff deception

Steinhoff’s share price has since lost 96% of its value, costing investors – many of whom are pensioners – more than R200 billion.

There is still little clarity about the nature and extent of the corporate fraud, with PwC, appointed by the current Steinhoff board to investigate the matter, due to submit a report in December.

The two journalists however believe that they have been able to prove their hypothesis that a British property developer, Malcolm King, and George Alan Evans, a Geneva-based former banker, acted as fronts for Jooste and others at Steinhoff.

They told a media briefing hosted by the National Press Club on Friday that they ploughed through hundreds of documents, including some of the Panama Papers, and followed clues left by anonymous analysts and fund managers on Twitter, including those of @JSE_Dog, which has since been closed.

They also made contact with sources close to the action by throwing breadcrumbs out on Twitter inviting people with knowledge to contact them, and built on previous piecemeal investigations by various journalists and media houses in South Africa and Australia as well as hobby investigators.

According to Thompson and McKune, King, 74, sometimes fronted for Jooste in furniture company trades, while Evans handled Jooste’s and the Steinhoff family’s offshore companies, using ‘placeholders’ to hide the identity of the real owners.

By 1990 Evans had set himself up as a professional trust provider, through his company Warren Trustees Group. By 1997, a year before Steinhoff’s listing on the JSE, Evans was handling both Jooste’s and the Steinhoff family’s offshore dealings, the report states.

He allegedly set up Danesfort Investments in Jersey for Jooste (integrating it in the structure of Jooste’s existing Nordic Settlement trust) and The Marksman Trust for Bruno Steinhoff for the benefit of his daughters. The real ownership of the entities was however disguised behind Warren Trustees, they state.

These entities, Thompson and McKune allege, were the main vehicles for the secret deals.

One example involved Steinhoff’s lease of a property in Ashchurch, Tewkesbury, Gloucestershire, United Kingdom in 1999. This lease allegedly enabled entities secretly owned by Jooste and the Steinhoffs to obtain funding to buy the property through a shelf company with no business history.

Through his associates, Jooste and the Steinhoffs seemingly also built up big positions in companies ahead of Steinhoff getting involved with the same entities, often at a premium. One example of this was Steinhoff’s involvement with the Australian listed Freedom Group that started in 1999.

Jooste served on the board of Freedom while King and Evans allegedly obtained 27% of the shares in the group, Thompson and McKune allege. They further state that the Steinhoffs also built up a substantial position.

They say that despite market scepticism, “it proved a great investment because, in 2003, Steinhoff part-funded the Freedom Group’s managers when they announced they would buy out Freedom’s shareholders for AU$221 million (R1 billion) at a premium”.

Thompson at Friday’s briefing questioned the fact that a beneficiary of the Steinhoff family’s trust, Angela Krüger-Steinhoff, is still serving on the current board that is tasked with cleaning up the mess and saving the company, while she is seemingly a beneficiary of some of the transactions he and McKune are questioning.

He said Krüger-Steinhoff did not respond to their enquiries, nor did either of the other implicated persons, except King. When they confronted King with evidence contradicting the responses he gave them, he also stopped communicating with them, Thompson and McKune stated.

Thompson questions the apparent lack of haste in the South African authorities’ criminal investigations into the matter.

He said it does not make sense for the authorities to wait for the PwC report, which was commissioned by the very same company where the fraud was institutionalised for such a long time.

That makes the JSE an illegitimate maternity ward protecting these bastards.

And let’s not forget the biggest part of the fraud, which the board and committee had to be complicit in : selling garbage debtor books to undisclosed related parties at inflated values not for cash but for high income yield loans, so that the related party can wash the book (probably offsetting their other global income for tax purpose) while steinhoff reported false profits, and then getting rid of the loan by buying the related party for an inflated figure in exchange for steinhoff stock.

The board and Wiese will say they knew nothing about it, from 1998 till now??

Pull the other one please.

Don’t you wonder who is feeding all of this to the press regarding Jooste ? I suspect the very people who knew all along and did nothing as it suited them to keep quiet. They all profited. Now they need a scapegoat.

The ‘bolts from the blue’ are coming thick and fast for Wiese now.

Nice summary of the actual function of what they were doing, transferring public listed equity value to themselves via various structures…

Will this crook go to jail or carry on whale watching for the rest of his life?

Where has he stashed to loot?

Just wait till his silicon side-chick turns on him, or his wife, or both! How lovely, can’t wait. THEN the info will flow …

on the point of the JSE ignoring trouble….Ecsponent and all their prefs…why?

The fact that no clear and serious action has yet been taken is shocking. While SA’s system is clearly failing, let’s hope that the other countries where these guys committed their fraudulent activities will now press ahead with greater gusto (e.g. UK and Australia, among others).

Brilliant, brilliant reporting by Warren Thompson and Craig McKune. Bravo! Are you telling me those Stellenbosch ‘geniuses’ Jannie Mouton and Christo Wiese didn’t know about this? Pull the other one. Whitey Basson did and Johann Rupert did – to their eternal credit. Jooste was just Kebble 2.0, a liar, a psychopath and a thief. Perhaps he would consider Kebble’s exit strategy? I’d be happy to help.

Let’s not forget Deloitte. They took all those fees & failed to perform a basic audit!

In my area we have a local newspaper called the TygerBurger. There was a small article the other day in that newspaper that an Attorney who stole R762 000 from clients, was sentenced by the Bellville Commercial Crimes Court to effectively 4 years in jail. Whilst I don’t condone the theft of R762 000 by an Attorney, I couldn’t help but to grin when I thought of the likes of Jooste, Zuma and the Guptas. Here you have people that stole slightly more 😉 than R762 000 doing no jail time whatsoever to date hereof. We are prosecuting the mickey mouse thieves whilst the big guns are getting off scot-free and will be enjoying Christmas with their families.

Who is standing next to Jooste in the pic, his right, with a smile as big as Jooste’s?

The JSE is allowing these entities/people to do as they please and turning a blind eye to the blatant disregard to the JSE regulations …..sick!

CEO of the JSE, Newton-King.

And where were the auditors when all this happened??

Knowingly lining their own pockets. I’m sure they made a BIG point in their sales & marketing efforts to highlight that Steinhoff was a client of theirs – attempting to ride the false wave that they helped build.

How many of these crooked companies (and SOE’s) have recently been identified where one of the BIG 5 audit companies were involved? The list is growing…

Co-operating with Steinhoff. For big bucks.

Jse wake up there are other entities that are following the same recipe under your nose. Steinhoff has the same ingredients than the Zephan Ortotouch sage. Trusts and shelf co were used to hide the real owners amd beneficeries. Please investigating journalists follow the paperworks!!!!