Businessman Joaquim Alves of Ficksburg in the Free State was this week acquitted of theft, which he was accused of after marching into the local municipal pound in 2019 and retrieving his vehicle bearing a Lesotho number plate. He maintained that it had been unlawfully seized by customs officers acting for the South African Revenue Service (Sars).

He was also acquitted of defeating and obstructing the administration of justice over the incident.

Alves says he has spent more than R1 million in legal fees on his case against Sars – all over a vehicle that cost R40 000.

“Why am I doing this? As a public service. How many thousands of people have had their vehicles unlawfully impounded by Sars, but don’t have the means to fight back? Sars must stick within the laws of the country, like everyone else.”

Moneyweb has been following this story since 2020.

“Taxpayers should be asking how Sars is spending their money,” he says.

The good news for Alves is that Sars has to pay all his legal bills, after he defeated the tax agency all the way up to the Supreme Court of Appeal (SCA) in Bloemfontein. Radebe and Alves pictured this week after their victory in the Ficksburg Magistrates Court. Image: Supplied

It all started in 2019 when customs officials seized a Nissan Serena station wagon belonging to Alves in Ficksburg. The vehicle has a Lesotho number plate, and customs officials argued that it was an ‘import’ on which the owner had to pay duties. Alves argued in vain with the officials that the vehicle was not an import, and that any duties payable on the vehicle would have been paid at the port of entry, Durban.

Alves was furious that the customs officials had seized his vehicle. He promptly went home to grab a spare set of keys and walked into the local municipal pound and retrieved his vehicle. For this he was charged with theft and defeating and obstructing the administration of justice.

Police arrived at his home on a Friday and arrested him, locking him in a cell for the weekend, to appear before the magistrate the following Monday.

Alves, who has high blood pressure, complained that he might not make it through the weekend, and ended up in hospital.

When the case was heard by the magistrate the following Monday, Alves was released and Sars was ordered to return his vehicle – which it has yet to do.

What emerged in the course of the various court appearances is that the Sars customs official, Abel Tau, declared himself the owner of the vehicle when signing the disposal order in 2019. This, argued Alves in court, was tantamount to fraud.

There are strict controls over the import of second-hand vehicles into SA, which requires permits issued by the International Trade Administration Commission of South Africa. This is to protect the local car industry.

The same rules do not apply to neighbouring countries such as Lesotho and Botswana, where second-hand imported vehicles are everywhere in sight, and are often visible on South African roads bearing number plates from these countries.

This is a contentious point for owners of second-hand vehicles being imported and sold in member countries of the Southern African Customs Union (SACU). Customs officials have targeted vehicles with number plates from Lesotho, Botswana and eSwatini, but driven by South Africans, claiming this violates the prohibition on second hand vehicle imports.

Alves isn’t done with Sars yet. Radebe says the string of victories notched up by his client against Sars should give comfort to others in a similar predicament.

“Sars has run out of legal options, but we have not finished with them. Our next step is to get Sars to return the vehicle to my client and that case will be argued in courts on 13 June.

“We have already sued the state for the unlawful detention and unlawful arrest of my client, and for malicious prosecution.

“We are now preparing a damages suit and instructing counsel.

“And we believe we have sufficient evidence to proceed with [a] class action suit against Sars for unlawfully seizing possibly tens of thousands of vehicles over the years,” says Radebe. 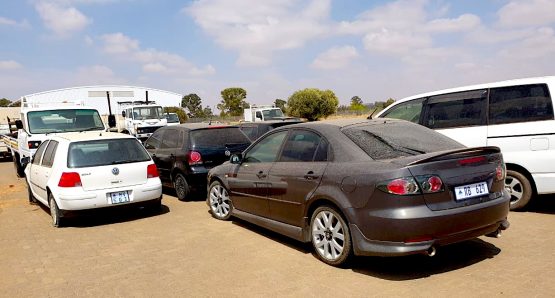 A few of ‘possibly tens of thousands’ other vehicles with Lesotho number plates unlawfully seized by Sars. Image: Supplied

As previously reported in Moneyweb, Radebe argued that Sars continues to rely on Section 88 of the Customs and Excise Act in conducting these seizure operations.

Radebe says this clause is so badly worded and open-ended that any South African driving their locally-purchased vehicle could be subject to the same treatment as Alves, which would violate constitutional protections against arbitrary deprivation of property.

Radebe argued before the magistrate that Alves was within his rights to march into the Ficksburg municipal pound and retrieve his vehicle as he was the owner, it had been unlawfully seized by Sars customs officials, and it was under no-one’s lawful authority and control.

He also argued that there was no legal basis for the seizure operation conducted by Sars on the day in question as it was targeting vehicles driven by South African citizens, with South African drivers’ licences, operating vehicles with Lesotho-registered number plates.

“I further submit it is not illegal for a South African citizen, with a South African licence, to drive a vehicle with Lesotho-registered number plate,” Radebe told the court.

Radebe says the fact that these arguments were not refuted by the magistrate means these claims stand as legal fact in the eyes of the court.

The implications of this series of judgments are huge, adds Radebe. “As I have argued for years: If you own a vehicle, no matter where it was manufactured, and it has been imported into the SACU area, you are free to drive it without hindrance anywhere in the common customs area.”

This is very good news!!! Nice to see the enforcer get a black eye.

I cannot wait for the big class action case: SARS cannot levy income tax while the politicians and government officials spend money as if it is their own money.

The Income Tax act is law that is not reasonable given the fact that money put into the wallet is not used for what it was intended. Not in my opinion anyway. Paragraph 33 (1) of the constitution requires that all administrative law must be reasonable:”Everyone has the right to administrative action that is lawful, reasonable and procedurally fair.”

Paragrapgh 2 of the constitution renders such law invalid: “This Constitution is the supreme law of the Republic; law or conduct inconsistent with it is invalid, and the obligations imposed by it must be fulfilled”

“Taxpayers should be asking how Sars is spending their money,” he says.

The arrogance to think they can just waste taxpayers money like this. Somebody should be fired!

These Japanese import cars should also be allowed to be registered in RSA. Now one can only register them in the neighbouring SADC countries. Excellent value for money.

I agree and think there is a mismatch in pricing maybe due to effectively collusion in SA or just because of the taxes, duties and tariffs added to vehicles in SA. All of which stack up to the consumer being ripped off with the ANC regime’s blessing. Same as banking and cell phone etc charges really.

My suspicion is also that a few letters headed R200 or even R100 may have done the trick. Well done for winning and not paying.