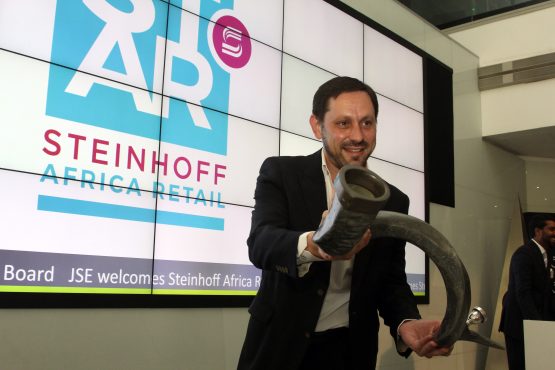 Ben La Grange has resigned from his position as CEO of STAR but will remain CFO of Steinhoff, the company said on Thursday. Picture: Moneyweb

Well at least we can now begin to see the size of the nuclear bomb that has been detonated inside of Steinhoff.

The company released a statement this morning putting a figure on the “investigation, validity and recoverability of certain non-South African assets of the company which amount to circa €6 billion”.

The company said nothing else in this regard.

But it did immediately move to address liquidity (the ability to pay suppliers and creditors on an ongoing basis). As could be seen by the market reaction to the price of listed subsidiaries and investments owned by Steinhoff, namely its stakes in Steinhoff Africa Retail (Star), KAP Holdings and PSG, it appears the stakes in the latter two will be sold to raise money and pay down debt. “The company has today received expressions of interest in certain non-core assets that will release a minimum of €1bn of liquidity,” the statement reads.

Then, Star is going to formally commit to refinancing its obligations owed to Steinhoff. Star will raise long-term funding in South Africa, getting a lower cost of finance than what it currently gets from Steinhoff,  and repay Steinhoff in full. Star, which includes Pepkor, is highly cash generative.

Steinhoff hopes to raise €2 billion from the combined sale of investments and restructuring of the debt owed by Star.

R100 Billion hole! How do the analysts and Asset managers who invested into this company do their research?

As a matter of fact, some of them do not research but simply believe the management. Example is Wayne McCurrie of Ashburton Investments who said exactly that; he believes the Steinhoff management. Check his twitter page for reference.

Unfortunate you are spot on – like lambs to the slaughter

Good comment Think_B4U_Reply. Check Ashburton’s local and international funds performance – they have consistently underperformed their own benchmarks over 5 years. Now I understand why. Don’t give them any of your hard earned money.

Bear in mind that it can be deeply unpopular to have a Sell recommendation and target price at odds with the share price. Asset managers these days pay “research” for management access rather than proper research, and you don’t get management access if you have a Sell as a research analyst at an investment bank. I always say that “management guidance is the worst guidance”. Management has too much vested interest (they lie) and usually no relative / big picture view

These days analysts seem to be paid for management access rather than research. So, no one has Sell ratings because they’ll upset management too much. The worst guidance always come from management, so I don’t know why asset managers care about it. Management has too much vested interest and rarely have a relative/big picture view.

Particularly disappointed in Coronation who were, as I recall, also bitten by ABIL?

How on earth can a Balanced Fund that purports to be an investment vehicle for retirement, invest 0.8% of Steinhoff, a furniture manufacturer. It is not only the asset mix that makes a fund suitable for retirement savings; it is MAINLY the quality of those assets.

Hope that they sold out since the 24th Nov 1 and before 1st December.

When accountants look more like financial alchemists, then you know something has gone wrong.

But what could possibly go wrong when you have a qualified accountant doing your books?

Whoa…
“. Star will raise long-term funding in South Africa, getting a lower cost of finance than what it currently gets from Steinhoff”

So WHY did STAR raise the funding from Steinhoff in the first place?

To transfer the pep profits to Europe! It’s called transfer pricing and tthe sars clots never saw this. Neither did the rubbish gang of analysts

It sounds like all that Brait touches (or at least starts rolling up with debt) turns to ‘haircut’.

Looks like Theo Botha had it spot on 2.5 years ago. Perhaps Len Konar owes him an apology? Also shows that weak corporate governance always comes back to bite you.

there was a sale of some R250m in value of steinhoff shares made on 5th Dec at JSE close before announcement ; has that transaction been investigated yet ???

Glencore was in the same position a few years ago, lets just hope that for investors sakes there is some one with big conjoros to steer this ship.

Glencore was primarily an UK listed company, that got into trouble during the commodity downturn. NOT by lying & fraud

Wasnt Glencore party to the Optimum mine and to the purchase / sale of the strategic oil reserves ? They seem to be keeping strange company.