Hudaco’s share price has been flying since it released its annual results about two weeks ago. It has gained 22% with a substantial portion of those gains coming on the day the group released its results. Investors seem impressed by the company’s solid close to the year, which saw it more than offsetting a 20% decline in first-half earnings.

We think investors are also reading into management’s largely positive earnings guidance. Management says order books for most of its businesses are healthy. They expect strengthening commodity prices, slightly better GDP growth forecasts for FY17 and relief from drought to bolster demand for Hudaco’s products. 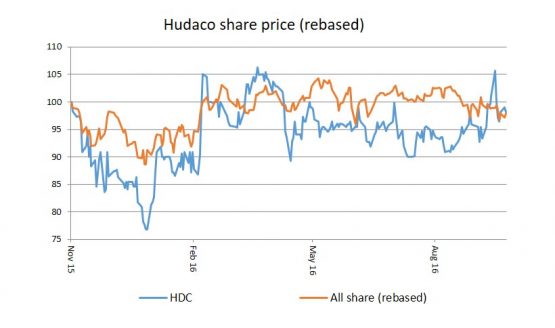 While we agree with management’s positive outlook, we still think the sluggish economic growth projections for SA are going to continue constraining the group’s ability to post double-digit growth numbers. Hudaco’s sustainable growth is pinned on SA’s broader economic performance. Furthermore, while the improvement in commodity prices will bolster its engineering consumables division, growth drivers of its bigger consumer-related division are still under pressure.

We are also worried that the strengthening rand may hurt earnings. As an importer, Hudaco charges prices that are linked to the dollar-rand exchange rate. So, while its sales line is affected by exchange rate movements, its expense line is affected by the local rate of inflation. This imbalance represents a real risk when the rand is strengthening: sales could fall in response to a strengthening rand while expenses – driven by local inflation – continue to rise, which would result in a margin squeeze. As at FY15, the group estimated that a 10% strengthening of the rand could, without management intervention, result in a R150 million fall in operating profit over a full financial year.

That said, we do expect Hudaco to put in a decent performance in FY17. Management is likely to continue with its acquisition strategy. Most of the acquisitions made so far have come at favourable earnings-accretive ratings. It has been paying five to six times earnings for small acquisitions and seven times earnings on bigger ones.

However, we feel that Hudaco’s improved growth promises have already been priced into its share price. We therefore maintain our hold opinion on its shares.

Nature of business: Background: Hudaco Industries is a group of companies specialising in the importation and value-added distribution of branded industrial and security products in Southern Africa. Its operations are divided into three: bearings & power transmission products, powered products and security equipment.