Is Tesla heading for a crash? 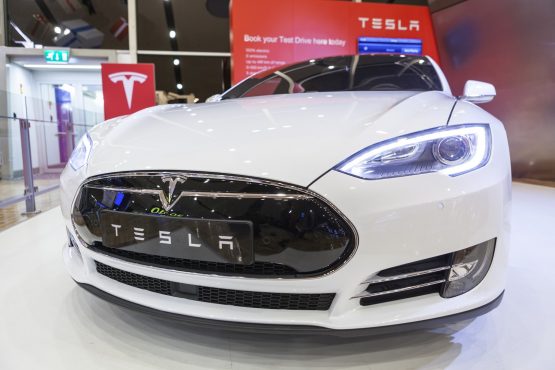 The American automaker burned through $1.4 billion of cash in Q3 and plans to spend $1 billion in capex in the next quarter, adding to concerns about the company’s frail balance sheet. Picture: Shutterstock

If there is one thing that Tesla does – it stimulates debate, a lot of it. It seems that one is either a Tesla disciple or not. The believers have helped drive the company’s share price up 113% from November 2016 to its June high of $386.99.

They are betting on founder Elon Musk’s plan to transform the carmaker into a clean energy and transportation company offering rooftop solar energy systems and power systems as well as exquisitely manufactured electric cars. Musk, they say, is a visionary – one who has just delivered the 250 000th Tesla and is intent on challenging the entrenched power of an aging industry reliant on the internal combustion engine.

Critics argue that the company faces a barrage of competition in the electric vehicle market and that Musk oversells what the company can realistically achieve. He is a perfectionist who thinks nothing of spending three days with a sound engineer listening to Hotel California because the volume dial made a tiny noise as the sound was turned up. So it is perhaps no surprise that Tesla misses self-imposed deadlines and stated goals. Most recently the company pushed its production goal of producing 5 000 Model 3 vehicles per week by December of this year to late in the first quarter of next year and the goal of producing 10 000 a week by the end of 2018 is no longer discussed. The Model 3 is the high volume mass-market vehicle that is meant to deliver the company into profitability.

However, profitability is looking a little elusive and the share price dropped $22 from $321 in early November after it announced disappointing September quarter three results. Disappointing is probably an understatement. The company recorded a net loss of $670 million for the period on revenues of $2.98 billion. While revenue increased from $2.2 billion in the previous September, losses widened significantly.

Tesla also burned through a hefty $1.4 billion of cash in the quarter, and plans to spend $1 billion in capex in the next quarter, adding to concerns about the company’s frail balance sheet. Since then shares have traded at around $303/share.

There is no doubt that the company faces some growing pains, but these are prompting some investors to ask whether the company is headed for collapse.

Financial analyst and publisher Bill Bonner asked this in one of his daily letters recently. As he says, it’s not difficult to find reasons to support this argument. The company’s market cap – the value of all its outstanding shares – is sitting at $51.6 billion. That’s higher than Ford’s market cap, despite Ford making profits of $4.6 billion last year and Tesla sitting in loss-making territory.

Similarly Tesla has almost as high a market cap as General Motors, which had more than $9 billion in earnings last year and which sold 10 million vehicles versus Tesla’s 76 000. The financials, Bonner argues, do not justify the valuation. What is driving the share price he says is the personal mystique of Elon Musk and the cult of personality that has developed around him.

It is true that no matter how much vision and ambition Musk may have, he cannot wish away the cash crunch that faces the company.

As with any company, Tesla can tap three sources of cash for funding. Expanding off the strength of internal cash flows would be best but as it is spending more than it is earning this isn’t an option. Alternatively it could offer the market more shares. While this would dilute existing shareholder holdings, it has worked in the past and would continue to work, for as long as the share price kept increasing.

As stated though, the company is priced as a carmaker that sells millions of cars, but it’s struggling to get past the 100 000 unit sales per year mark. “I personally think that stock dilution has now become a dry well for Tesla,” writes Zoltan Ban in this article on Seekingalpha.com. “It played out that option last year, which is not something that Tesla can expect the market to tolerate again for some years to come.”

The third option is bonds. Long-term debt, however, is now sitting at $9.6 billion, up from $6 billion at the end of 2016. The solution to its debt problem is of course to grow out of it, which is where the need to ramp up the production of Model 3s is becoming urgent.

Production bottlenecks and hiccups, coupled with cash flow constraints, are hampering efforts to achieve this. Compounding Tesla’s woes are suggestions that orders for its model S and X have declined in the quarter.

So, is the company facing a financial crunch that could lead to its ruin?

Before answering the question, Seleho Tsatsi, an analyst with Anchor Asset Management, points out that while Tesla management has largely delivered on its original strategic plans outlined in 2006, it has a history of not meeting publically-stated goals.

He adds that Tesla plans to ramp up production by a factor of 12 over the next three years (to 2020), which will generate material revenue growth. He has two concerns. The first is the margin. “We don’t believe the firm will reach the margins required to justify its current valuation. At the current share price we believe the market is pricing in flawless execution of the production ramp up, and an operating margin of at least 15%.”

The second concern is the balance sheet. “We’re currently forecasting about $1 billion of cash burn per quarter. Additional capital raises look likely if that rate of cash burn is maintained for any meaningful level of time.”

Given the lower than initially guided ramp up of Model 3 production, he expects cash flows to continue to be under pressure. Further capital raises (whether via debt or equity) look increasingly necessary, he says.

Byron Lotter, portfolio manager at Vestact, does not deny that the company faces some challenges. “Their current issues revolve around supply, not demand and short-term ‘investors’ might be concerned about these bottlenecks.

“However, not only do I think Tesla will survive, I think it has the potential to become massive. People often compare Tesla to other vehicle manufacturing companies. But it is not just that. It is a utility, a software business and most importantly a battery manufacturer. When all the other big car companies manufacture electric vehicles where do you think they will come knocking to buy those batteries? Tesla is a first mover and has pumped billions into mainstream battery production. Solar and battery power will be a huge part of our future and demand for electric vehicles will be massive for 50 years and more because of the low base it is coming off.”

He adds that the vehicles themselves are beautifully designed, with an allure similar to Apple. For this reason, they will continue to attract a premium.

This does not change the fact that at current levels – even with the sell off – some would consider the share price expensive. Anchor’s valuation puts the price at about $149, some way off current levels.