Cape Town – Over the last decade, South African listed property has been extremely good to investors. It has shown returns comfortably ahead of any other asset class, delivering an annualised return of over 17% since 2005.

However, the consensus is that investors need to moderate their expectations for the asset class going forward. These high returns are unlikely to be repeated.

That doesn’t mean that listed property is now completely unattractive, as its yield characteristics make it a particularly useful part of an income-generating portfolio. Investors and fund managers do, however, need to be more canny about which companies they include in their portfolios.

For the year to the end of December 2015, the Absa Property Equity Fund, Contego B4 MET Property Fund and Plexus Wealth BCI Property Fund were the three best performing South African real estate unit trusts. What is notable is that all three have built portfolios that look very different to the index.

This is significant because for many years property funds were restricted by the size of their investment universe and the lack of liquidity in this sector. There was therefore little differentiation between them.

That is, however, changing, and these three funds in particular have shown that there are potentially big benefits to looking at things differently. There is no clearer illustration of this than that none of them has any exposure to Growthpoint, which is easily the largest South African listed property counter.

To give a picture of how these funds have been positioning their portfolios, the below tables show which counters they have bought into, and which they sold out of over the 12 months to the end of September 2015. The share must have had a weighting of more than 1% to be considered.

The tables also show any substantial changes to positions within the funds. To be reflected, the change must be more than a 1% shift in the weighting of the holding which is due to not just price movement.

The final table shows the top ten holdings in all three funds at  September 31 2015. 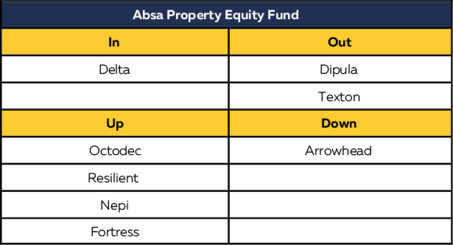 The only stock that Absa added to its portfolio over the year was the Delta Property Fund. Delta’s share price has lost around 20% of its value since it listed in November 2012, but it is its high yield of over 12% that makes it attractive.

Dipula and Texton, which the fund has sold out of, are also in the same category of higher yielding smaller companies. Being less liquid, however, they are more prone to big share price movements, and this was reflected in their performances towards the end of last year when their share prices tumbled as bond yields spiked after Nhlanhla Nene was dismissed as minister of finance.

New Europe Property Investments (Nepi) has become a favourite among local real estate counters and for good reason. The fund, which is primarily invested in properties in Romania, has doubled its net asset value per share in Euro terms over the last five years while maintaining yields at over 7.5%.

Its share price has grown over 500% in that time. Absa is one of many local funds that has been increasing its exposure to this Eastern European success story. Contego has been by far the most active of these three fund managers, making a number of changes to its portfolio. Notably, three big counters in the form of Growthpoint, Redefine and Resilient were sold in favour of a selection of smaller companies.

Among those additions are Sirius and Stenprop, both of which hold only international assets in Europe. Sirius’ portfolio is concentrated in Germany, while Stenprop also has interests in the UK and Switzerland.

Another interesting counter included in Contego’s fund is Pivotal, which listed in December 2014. The company has an established portfolio in South Africa, but is clearly eyeing the potential in the rest of Africa.

It is also worth noting that all three of the companies to which the fund increased its exposure own assets in Western Europe. MAS operates in the UK, Germany and Switzerland, Capital & Counties is focused on the British market, and Redefine International has assets in the UK and Germany. The single addition that Plexus made to its portfolio was Emira, which owns a few large retail properties in Gauteng, including the Epsom Downs Shopping Centre in Sandton, but also a selection of regional centres in places as out-of-the-way as Kokstad, Dundee and Nongoma. The company’s share price is more or less flat over the last three years, but it is offering a yield of close to 9%.

The fund also significantly increased its exposure to Tower, which is another that has a core of properties in Gauteng and Cape Town, but also owns properties outside of the major centres in towns such as Modimolle and Brits. Tower’s share price has fallen around 12% since it listed in late 2014, but it is yielding close to 10%.

The below table shows the top ten holdings of all three funds at the end of September 2015: