Prudential Inflation Plus Fund has been the star performer.

Coronation: Overweight in SA equities
All you need to know about AirBnb’s IPO and the Brexit deadline looms
Festive cheer for headhunters
CLICK THIS COMPANY MORE COMPANY NEWS SENS
CORONAT

At the end of June this year, R211 billion was invested in South African multi-asset, low-equity funds. That makes it the third largest category in the local industry behind multi-asset, high-equity and general equity.

Incredibly, two thirds of this money is invested in just four funds – the Coronation Balanced Defensive Fund (R39.4 billion), the Allan Gray Stable Fund (R35.3 billion), the Prudential Inflation Plus Fund (R33.7 billion) and the Nedgroup Investments Stable Fund (R31.6 billion). Yet there are a total of 145 funds in this category.

That illustrates quite clearly that the majority of managers of multi-asset, low-equity funds are handling much smaller portfolios. And while the four big funds all have good performance records, a number of these smaller managers are proving that they have plenty to offer as well.

The table below shows the top ten performing multi-asset, low-equity funds for the five years to the end of September. 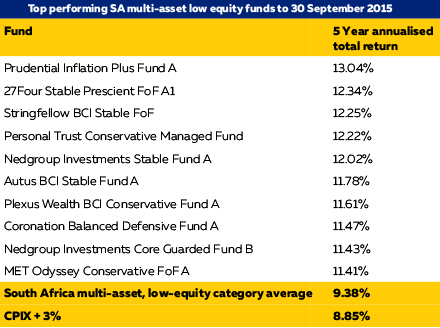 The Prudential Inflation Plus Fund stands out for generating returns more than 7% above inflation. That is an excellent record considering that funds in this category are limited to holding no more than 40% in equities.

A big driver of its performance has been a healthy allocation to local listed property, which has been easily the top performing asset class over the past decade. The fund has also generally been overweight on South African inflation-linked bonds relative to its peers.

A number of funds in this category follow a fund-of-funds strategy, and over the last five years the 27four Stable Prescient Fund has done so very successfully. It has also proven that fund-of-funds are not necessarily more expensive, with its latest stated total expense ratio (TER) being just 1.36%. This makes its fees lower than those charged by the Prudential Inflation Plus Fund.

It is also notable that the Nedgroup Investments Core Guarded Fund makes it into the top ten. This fund is passively managed, using indices for all of its underlying exposures. At a TER of just 0.46%, it provides a fairly compelling argument that passive multi-asset strategies can be both effective, and cost effective.

Taking a longer-term view, the following table shows the top performing funds in this category over the past ten years. 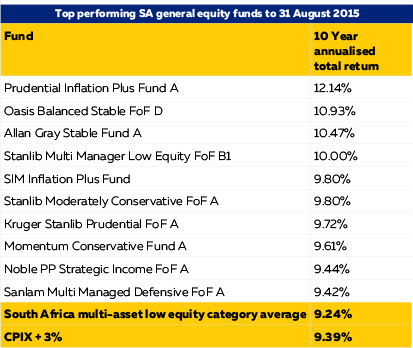 There are only 21 funds in this category that have been around for ten years or more, so this represents almost half of them. Most notably, two of the big four – the Coronation Balanced Defensive Fund and Nedgroup Investments Stable Fund – are not yet ten years old.

Once again the Prudential Inflation Plus Fund tops the list by a good margin. What is particularly significant about its longer term performance is that during the market crash in 2008 it managed to protect investor’s capital well and recover the minor losses it sustained very quickly.

It is also interesting that although all of these funds have been around for a long time, some of them remain very small. The Oasis Balanced Stable Fund of Funds has assets under management of just R86 million.

As a final point, it is interesting that the category average comes in below the CPIX + 3% target that would usually be acceptable for funds with a low equity mandate. In fact, all of the other 11 funds in this category with ten-year track records under-performed that benchmark.

What makes a good balanced fund?

What makes a good balanced fund?