One reason cryptocurrencies should form part of every portfolio is their proven ability to vastly outpace the rate of inflation. Image: Supplied

That amounts to a roughly 8% inflation rate per year. Expressed another way, R100 in 1961 is worth roughly 67c today. Most people view inflation as the prices of goods and services becoming more expensive over time but what this actually means, when looking at it from a different perspective, is that currencies are becoming less valuable relative to the same real-world goods and services. A chicken or a dozen large eggs are still the same items today as they were back in 1961 – they haven’t become more valuable. “This also shows why bitcoin and cryptocurrencies should form part of every portfolio, even if just a small component, because of its proven ability to vastly outpace the rate of inflation and the general devaluation of not just the rand, but all fiat currencies.”

Sanders points out that the price of bitcoin has increased from R1 000 in March 2013 to its current level around R750 000 – a 750-fold increase in value over eight years.

The same deflationary effect is visible when comparing bitcoin to the US dollar and other currencies.

The US dollar has been depreciating in value by about 3.4% a year since the end of World War II. To be more technical, this means that $100 has lost $3.40 in real purchasing value every year on average. In fact, the buying power of $100 has fallen to $7.45 since 1947 through inflation.

Bitcoin since inception has appreciated by nearly 200% compounded a year, making it the fastest growing asset of the last decade and arguably of all time. This remarkable growth is largely due to its growing adoption worldwide and the fact that there will never be more than 21 million bitcoin issued.

“If you compare the supply characteristics of bitcoin relative to say the USD, you have a programmatic hard cap on the number of bitcoins that will ever be in circulation and you also have a deflationary growth rate of new bitcoins since every four years the inflation rate of Bitcoin gets automatically halved,” says Sanders.

“The USD on the other hand has no maximum limit to the number of dollars that can be printed and the rate of money printing, which is the inflation rate of USDs, is sitting at an all-time high. In fact, $9 trillion US dollars were printed in 2020. That’s 22% of all USD that were in circulation at the start of 2020.

Sanders continues: “Currencies become worthless, and over the long-term they become truly worthless.

“This explains why companies like Tesla, MicroStrategy, Stone Bridge, and Jack Dorsey’s payment company Square are putting some of their cash reserves into bitcoin. They are playing the long game.”

When you’re looking at the relative demand side of the equation, worldwide demand for bitcoin and other cryptocurrencies has increased exponentially relative to the USD or any other fiat currency. There’s well over 100 million unique active bitcoin wallets globally and the value of the overall crypto market is now approaching 15% of gold’s worldwide value which is driving further adoption among blue-chip companies.

The risk of cash

At a recent conference organised by MicroStrategy CEO Michael Saylor to explain the logic of bitcoin as a store of value to CEOs, several presenters emphasised the risk of holding cash over the long term.

“Cash is now a liability, it’s no longer an asset. You’re guaranteed to lose money every year when holding cash. That has profound implications for corporate balance sheets,” said Ross Stevens, CEO of Stone Bridge, which has been shifting cash into bitcoin since 2017.

“Learning about bitcoin is like learning a foreign language. I now think in bitcoin. Bitcoin is not volatile – fiat currencies like USDs are volatile. Fiat currencies keep getting cheaper in bitcoin terms,” adds Sanders.

“The corporate adoption of bitcoin is accelerating, and we are just at the start of a trend that is likely to continue for several years. Bitcoin is now widely regarded as a safe store of value, and is often referred to as digital gold. You can see the impact this strategy of moving cash reserves into bitcoin has had on the share prices of Tesla, Square and MicroStrategy. Many people are buying these shares as a proxy for bitcoin.

“The next big trend to look out for as companies look for better ways to preserve the value of assets is corporate investment in Ethereum, which is the second biggest cryptocurrency in terms of market cap. I expect we’ll see a few announcements in the course of this year of companies moving some of their treasury assets into Ethereum.”

If you are working within an established, reputable crypto investing platform like Revix, which is backed by JSE listed Sabvest, you can effortlessly invest in both bitcoin and Ethereum’s native Ether token. Revix was launched to make it secure and easy to invest in cryptos like bitcoin and Ethereum and, through its investment platform, to gain exposure to ready-made baskets of cryptocurrencies that they call “Bundles” for as little as R500. Revix charges no sign-up, monthly account or subscription fees, but rather a simple 1% transaction fee for both buys and sells.

The Top 10 Bundle available through Revix spreads your investment equally over 10 largest cryptocurrencies – which covers about 85% of the crypto market when measured by market capitalisation – with each having a 10% weighting. By default, you are buying the 10 biggest success stories in the crypto space. The weightings are adjusted monthly to ensure no crypto exceeds a 10% weighting, and that can be a major advantage as other constituents of the bundle (like Ether, Chainlink, Cardano and Polkadot) have outperformed bitcoin’s amazing 300%-plus rise last year. 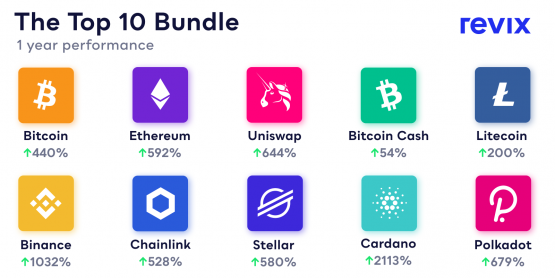 You can also buy and sell USDC (a “stablecoin” fully backed by the US dollar) and a physical gold-backed token called PAX gold which provides legal ownership of an ounce of gold through Revix’s online platform.

Is there a way to take some of the risk out of investing in cryptos?

What are NFTs, and how to invest in them?

The smart way to invest in cryptocurrencies

Cryptocurrencies that have outperformed bitcoin

Is there a way to take some of the risk out of investing in cryptos?

What are NFTs, and how to invest in them?

The smart way to invest in cryptocurrencies

Cryptocurrencies that have outperformed bitcoin