It’s being called the ‘new gold’ and the digital non-sovereign evolution of money: nearly half of millennials prefer bitcoin to stocks, real estate and gold. It appears millennials don’t quite get the fascination with gold that preoccupied previous generations, either as a store of value or hedge against inflation.

The growth of the asset class has baffled sceptics and converted more than a few of them to the ranks of crypto acolytes.

The world’s largest cryptocurrency has been the recipient of significant institutional investment in 2020, with the likes of MicroStrategy and Square investing $475 million and $50 million respectively.

“We sit at an unprecedented time in the macro-economy. The average investor fears inflation right now, regardless of whether we actually see that inflation or not. This fear has driven significant capital flows into inflation-hedge assets that are uncorrelated to traditional market movements and economic fluctuations to protect their wealth [gold, bitcoin, real estate and so on].

“The combination of the central bank stimulus and inflation fears has driven gold and bitcoin to drastically outperform equities and other commodities.”

Historically, gold has maintained its value over time and built its reputation as a ‘recession-proof’ asset class, but bear in mind that gold has existed for thousands of years. Bitcoin has been around a little more than a decade, having come from nowhere to account for about 3.1% of gold’s $9 trillion market cap.

To surpass the current market cap of gold, bitcoin would have to rise 25x from current levels, however, for it to account for 5% of gold’s market value the price of the largest cryptocurrency would rise to $31 300 from $19 500 today.

“That kind of price jump is not likely to happen in a year or two, it will take time, but it’s not inconceivable based on the growth in institutional demand and the changing public perception of crypto,” says Sanders.

“Investors are losing trust in fiat currencies that are being inflated away by unconstrained central bank money printing and government stimulus packages. Bitcoin was designed to avoid that. There will only ever be 21 million coins issued, and there are 18.4 million in existence right now. New bitcoin enters the market on a predetermined schedule that is coded into software and cannot be changed without agreement from 51% or more of the network. It’s highly unlikely this will ever change.”

They share some characteristics in that there is limited supply of both, and both have attracted interest from investors fleeing stocks, bonds and cash for safe-haven assets.

Bitcoin has some advantages over gold: low transaction, transportation, insurance and storage costs. Gold has to be stored in vaults and secured against theft. However, both bitcoin and gold exist beyond the control of a central monetary authority, which places their price-setting mechanism beyond the reach of any centralised authority.

Another notable difference is the transparency offered by bitcoin relative to gold.

All bitcoin transactions can be viewed on its blockchain, while a large part of gold trade takes place on London’s over-the-counter market, where less data is available. This transparency in bitcoin is driving a lot of interest relative to gold which is more like a black box, where you have to trust custodians about trading data.

“The price of bitcoin is going to continue to be volatile but the accelerating institutional demand, positive regulatory developments and failing traditional fiat-based financial system are why we’re so bullish on the longer-term investment prospects of the digital currency at Revix.” 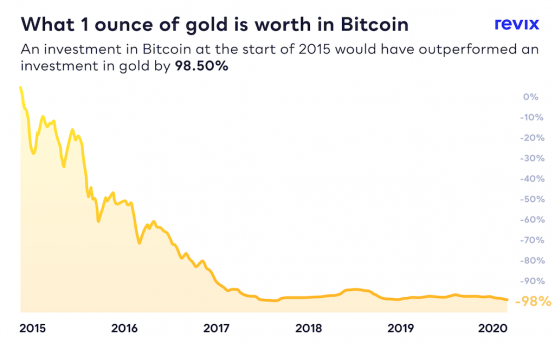 “The biggest mistake people are making is that they think they’re saving by holding South African rands in their bank accounts,” says Sanders.

“If you look at how corruption, inadequate fiscal policies and inflation have destroyed the purchasing power of the rand over the last 50 years, you really have to be asking yourself should I be taking the risk of holding ZAR in my account. I think we’ll see the end of fiat currencies within the next 50 years, and that’s going to be a painful transition for many.”

In other words, bitcoin has shown resilience when stock markets crash.

There are questions as to whether bitcoin can scale to the level of gold, which has an ancient claim to being the default resting place for investors seeking safety in times of financial turbulence.

These are debates that will likely rage for years to come. “Bitcoin is the new kid on the block and the research around it is still emerging,” says Sanders. “There is little doubt that it will experience periods of great volatility going forward, as it has done in the past, but bitcoin has firmly established its place in the financial system, and it’s importance will likely grow.”

BlackRock chief investment officer of fixed income, Rick Rieder, recently commented to CNBC that bitcoin could replace gold as a safe haven asset because it’s “… so much more functional than passing a bar of gold around.”

Sanders adds: “At Revix, we’re asking investors to take a closer look at bitcoin and crypto more generally as a potential 1-10% allocation in your portfolio over the next 15 months. Just as we advocate for a diversified investment approach which includes a 1-10% holding in gold and other alternative asset classes that are complementary. As we all know, the market is the ultimate referee in the game of investing, and it is emphatically telling us that bitcoin and crypto is worth holding.”

Diversification: Buying both gold and cryptocurrencies

Revix gives customers the ability to buy, sell and hold:

A Revix account can be opened for free in minutes and payments made electronically from your bank account or from your crypto wallet. There are no monthly account fees, with a low cost of 1% for each of the buy and sell legs of a transaction. Another advantage is that funds are immediately reflected in your Revix account should you decide to sell.