Fast growing small cap, Consolidated Infrastructure Group (CIL), has a market capitalisation just shy of R4 billion with a low teen price earnings (PE) and reasonably liquid script. The group has some unique business interests, like an oil services company in Angola, a leading rail electrification business and a good quality, domestic building materials business. But these assets just offer a free option when viewed next to CIL’s major underlying business’s fair value: Conco (which I estimate makes up a conservative c.80% of the group’s sum-of-the-parts fair value).

Operating in the power transmission space, Conco generates about half of the group’s profits by building electrical substations in South Africa and across the rest of Africa. Conco is arguably the local leader in this market, competing against parts of Siemens, ABB and Alstom in what is a high barriers-to-entry niche with great tailwinds driving long-term growth rates.

This is a construction-like industry with tenders, order books and large, lumpy projects, hence analysing it like a construction stock will give one a sense of its underlying quality (Figure 1). Figure 1 clearly illustrates the superiority of both Conco’s ability to win tenders and its ability to convert this work into profits.

But how much longer and how fast can Conco grow?

Intuitively we all know the pan-African electrification market has significant long-term demand from under investment for generations. But, let us not rely on intuition here and rather allow read what PwC has published regarding their views on this market:

“Overall infrastructure spending in the sub-Saharan region is projected to grow by 10% a year over the next decade… Nigeria and South Africa dominate the infrastructure market, but other countries like Ethiopia, Ghana, Kenya, Mozambique, and Tanzania are also poised for growth … The greatest growth of spending for utilities is expected in sub-Saharan Africa where an annual rate of 10.4% between now and 2025 is forecasted. Spending for electricity production and distribution is expected to rise from $15 billion in 2012 to $55 billion…”

Read the full PwC report here, but essentially it implies a growth rate of c.14% p.a. Add some inflation (and weakening currency) and a nominal growth rate of approaching 20% p.a. in local currency is not unrealistic.

Now this is only the tailwinds carrying Conco, but the rest of the Group’s prospects also look quite good.

For example, the rail electrification business, Tractionel, stands to gain from Transnet’s capex plans in the hundreds-of-billions and the Gautrain Phase 2 (it was involved in the Gautrain Phase 1). The Angolan Environmental Services (AES) stands to gain from the increasing environmental regulation of the waste generated by the offshore oil fields in Angola (along with the blue sky growth in this oil rich country). And then there is the acquisitive optionality with management constantly evaluating acquisitions and bolt-on’s to enlarge and enrich the Group while furthering its strategy of niche infrastructure exposure with the benefits of diversification.

So, all in all, the Group is very much still in the infancy of its growth curve and I expect an average growth in earnings of c.17% over the next decade, as compared to the ALSI’s c.9% (I do expect FY 15E profits to be flat to slightly negative).

But how much are we paying for CIL’s share?

Before I get into CIL’s fair value, let me list some of the assumptions I use in the Conco Discounted Free Cash Flow (DCF) model:

Using a range of other normal assumptions I arrive at a DCF fair value of c.R3.3bn, which implies a PE ratio of c.23.0x. As Figure 2 illustrates, this high rating is not that ridiculous in this long-term growth market with high barriers to entry when compared to one of the largest internationally listed comparatives (Alstom S.A.) and a broader collection of stocks in this type of industry: I accept that Conco is a hard asset to compare as there are few pure local comparatives (despite popular belief, Ellies’ Megatron business only occasionally competes with Conco’s main business), as even against global comparatives, Conco is in a higher growth continent with differing margins and risks. Still, against many other relative metrics Conco does not come out badly (Figure 3) and, thus, I believe that there is some comfort in comparing to the market multiples in Figure 2. 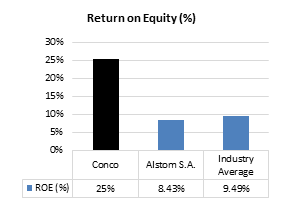 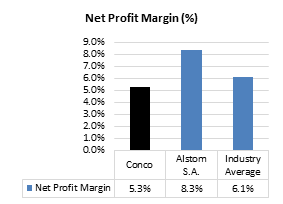 Now comes the interesting part of CIL’s valuation: If Conco is worth c.R3.3bn or c.2300c per CIL share (rounded up), then at the current CIL share price of c.2450cps we are only paying a maximum 150cps for the rest of the Group.

No, I do not believe so. In fact, I think it is worth quite a lot more.

Applying large discount of 50% to the S&P Oil & Gas Services Index’s PE ratio, I conservatively view CIL’s interest in AES to be worth R540m or c.360c per CIL share. Likewise, I have also applied a 50% discount to the JSE’s Building Materials Index’s PE ratio to value the Group’s Building Materials segment, giving it a fair value of c.R191m or c.130cps. I have assumed that Tractionel is worth no more than it was bought for and that the management fees accruing to the Group present value at c.100cps at a Group-level based on a basic DCF thereon.

Thus, collectively, it looks like the rest of the Consolidated Infrastructure Group is worth c.590cps per share (let’s say c.600cps for simplicity sake). Hence, CIL’s shares are worth c.2900cps, or around 20% higher than where its current share price is trading (c.2450cps at the time of writing this).

Let me do a quick reasonableness check on this implied Sum-of-the-Parts fair value of 2900cps for CIL shares: I expect the Group’s HEPS to grow on average by c.17% over the next decade and the implied PE ratio of CIL at 2900cps is c.15.4x, which equates to a very comfortable PEG ratio of only 0.91x. So, yes, I do believe that the implied fair value of CIL of 2900cps is quite reasonable.

Remember that I am using the low-end of the management guidance for the sustainable EBITDA margin for Conco, thus our valuation of Conco is really the low-end of a fair value range for the business.

Thus, at Consolidated Infrastructure Group’s current share price, at worst you are paying fair value for Conco and getting the rest of the Group for free. And, at best, along with the rest of the Group, you are actually underpaying for Conco… And this is assuming that the Group’s initiatives at building a maintenance business and various other organic initiatives have absolutely no value (in fact, the opposite is true, as these initiatives are going very well).

In conclusion, this is exactly what I love to find in the small cap space: a high quality, fast growing and apparently undervalued company. Hence, CIL is has been added to the AlphaWealth Prime Small & Mid Cap Fund.

This article was first published on Smallcaps.co.za here and republished with permission.

The oil services group in Angola was a goo d move at the time till the Angolan government decided it was not going to pay any foreign services in that country. Blame the low oil price, typical of the risk of doing business in an African country, if they decide not to pay they just don’t.