Argentine exporters are having a bumper year as prices of the nation’s top crops, such as soy, wheat and corn, have surged.
By Patrick Gillespie, Bloomberg 3 Jun 2022  07:32 Argentina’s government is expecting record export levels this year as the nation benefits from the surge of commodity prices.

South America’s second-largest economy is forecast to export $90 billion of goods this year, according to a senior government official who asked not to be named to discuss unpublished projections. That would be at least a 15% jump from last year’s mark and 38% higher than 2019 levels.

Service exports are expected to reach approximately $12 billion this year, according to the official. 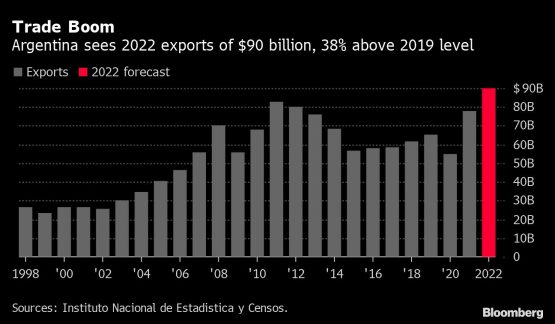 Argentine exporters are having a bumper year as prices of the nation’s top crops, such as soy, wheat and corn, have surged. The government is also making a concerted effort to boost exports in its energy and tech sectors, providing more access to dollars for companies that export in those industries.

Argentina needs more export dollars to help comply with its $44 billion agreement with the International Monetary Fund. Beyond the direct economic boost, exports also shore up the central bank’s net cash reserves, a key barometer of the program that many analysts already see off track.