Russia’s invasion of Ukraine has sparked a feverish run-up in the prices of just about every commodity.
By Vince Golle and Molly Smith, Bloomberg 7 Mar 2022  07:45 Russia’s invasion of Ukraine has sparked a feverish run-up in the prices of just about every commodity — from oil to grains to metals — that will inflict even more financial pain on consumers already struggling with rampant inflation.

Global food prices hit a record last month and consumer price indexes across major economies are on the rise. That’s bad news for households everywhere as wage growth largely lags inflation, underscored by the latest US hourly earnings figures that missed all estimates. The Bloomberg Commodity Spot Index rallied more than 9% this week as Russia’s invasion of Ukraine roiled markets, with foodstuffs soaring, metals setting records, and oil in the throes of the biggest crisis for decades. 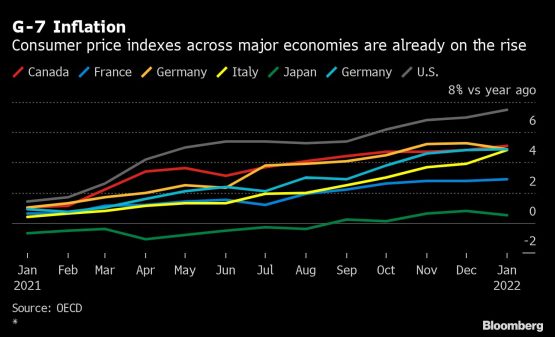 Supply chains that rattled the global economy through the pandemic are unleashing another shock as efforts to choke off trade with Russia strain resources ranging from fertilizer needed for crops and palladium for car-making, to oil that’s used to produce almost everything. US President Joe Biden is taking on the concentrated market power of ocean shipping companies, although officials at the agency overseeing the industry indicated they lack both the jurisdiction and, for now, any evidence of wrongdoing. The Federal Maritime Commission will join with the Department of Justice in a new initiative announced February 28, to push for competition in ocean freight transportation. Importers from London to Warsaw will soon face higher shipping costs, longer delays and an obstacle course of sanctions to navigate as Russia’s widening assault on Ukraine complicates the movement of cargo between Europe and Asia. US hiring boomed in February while wage growth slowed, showing a robust labour market that likely keeps the Federal Reserve on track to raise interest rates this month and offering some respite from strong inflationary pressures. The hottest inflation in four decades has prompted some employers to open the spigot on pay, but plenty still won’t budge — leaving workers in the lurch with a pay cut. Nearly 1 in 4 executives said they’re not making any changes to pay in response to inflation, according to a poll by Gartner Inc., an increase from the 18% who said so in December. The Bank of Russia raised its key interest rate to 20% — the highest in almost two decades — in a bid to shield the economy from the impact of sweeping Western sanctions that include penalties on the regulator itself. Belarus and Hungary also hiked, while Ukraine delayed its rate decision, which was scheduled for Thursday. Euro-zone inflation quickened to an all-time high, outstripping expectations as Russia’s invasion of Ukraine threatens to send energy costs soaring at an even faster pace. Consumer prices jumped 5.8% from a year ago in February, up from 5.1% the previous month and more than forecast. Washington is expected to lean on major Chinese companies to join US-led sanctions against Russia, aiming to cripple the country’s ability to buy key technologies and components. China is Russia’s biggest supplier of electronics, accounting for a third of its semiconductor imports and more than half of its computers and smartphones. Japan’s factory output fell for a second straight month in January as supply shortages continued to hurt manufacturers, adding to concern that the economy could shrink this quarter as omicron restrictions weigh on activity and the Russian invasion of Ukraine clouds the outlook.

What can the world’s biggest buyer of wheat do when supplies from mainstay providers Russia and Ukraine are choked by war? For Egypt, it could mean pressing ahead on a delicate venture: raising the price of subsidized loaves for the first time in four decades. Brazil’s economy exited recession at the end of 2021, lifted by higher raw material prices and services that provided some relief to a country afflicted by soaring inflation and interest rates going into an election year.