Global commodity markets surged to multiyear highs on Wednesday after traders backed away from Russia, sparking anxiety that supply will fall short in everything from wheat to natural gas. 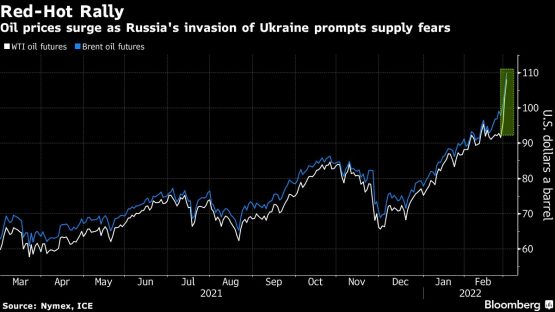 Even though natural resources have avoided direct sanctions, traders, banks and shipowners are increasingly avoiding business with Russia. They’re concerned about getting embroiled in banking sanctions, worried that new measures will include commodities and fearing the reputational damage of trading with Vladimir Putin’s regime.

The extent of that isolation was revealed as Russia’s Surgutneftegas failed three times to sell any crude oil via its tenders. The company currently has nine unsold cargoes of Urals, totaling 880 000 tons, for March.

“The markets are now adjusting to the next worsening of the crisis,” said Paul Horsnell, head of commodities research at Standard Chartered Plc. “Things that were unthinkable a week ago are not unthinkable now.” The commodities chaos caused by Russia’s war in Ukraine will reverberate through the global economy, sparking industry shortages and quickening inflation already at the highest in decades. Russia is the world’s largest energy exporter, a vital metals supplier and together with Ukraine accounts for 25% of wheat shipments.

China’s government told officials to prioritize commodities supply security, a sign of increasing anxiety among policy makers about the repercussions of Russia’s assault on Ukraine.

The impact of self-sanctioning and rejection of Russian counterparties are multiplying across commodity markets.

European natural gas surged as much as 60%, exceeding this winter’s record as supply fears were compounded by traders trying to avoid exposure to Gazprom PJSC’s trading unit.

Grain traders have been unwilling to take the risk of entering new business or pay the soaring costs of chartering and insuring ships to collect cargo from Russian ports. Ukraine’s exports are already at a standstill, with growing fears that supply disruptions will spill over into the next season and potentially beyond.

Benchmark soft red winter wheat futures jumped by the daily limit, soaring 7.6% to $10.59 a bushel in Chicago. Corn climbed 3% to the highest since 2012, before paring gains. In oil, a large number of tanker owners are refusing to load Russian cargoes until the impact of financial sanctions becomes clearer. The number of ships booked to load cargoes in March is less than a quarter of the number at the same time last month. Energy Aspects, a consultant, estimates as much as 70% of Russian exports isn’t currently being traded.

The surge past $110 a barrel for Brent crude happened even after the International Energy Agency coordinated the release of 60 million barrels from global stockpiles. Russia’s flagship Urals crude was offered for sale at a record discount but got no bidders. After market close, Brent crude surpassed $115 to touch the highest level since 2008.

“Commodity buyers from energy through base metals to ags are figuring out how they will fill their orders with Russia isolated behind a western-imposed iron curtain,” said Bill Farren-Price, a director at Enverus Intelligence Research. “Record highs for aluminum and record discounts for Urals all point to a major re-ordering of the global commodities landscape.”

Still, not all companies are shunning Russian energy supplies. Shell Plc, Europe’s largest oil company, is continuing to purchase oil and gas from Russia, according to a person briefed on the matter.

The chaos may abate once the impact of sanctions already imposed becomes clearer, but there’s also concern that penalties may be extended to Russian energy exports. President Joe Biden is being pressured by lawmakers in both parties to cut off US imports of Russian oil and gas.

It’s “hard to see how Europe and the US could continue to import oil from Russia indefinitely if the war continues on its current path,” said Standard Chartered’s Horsnell. 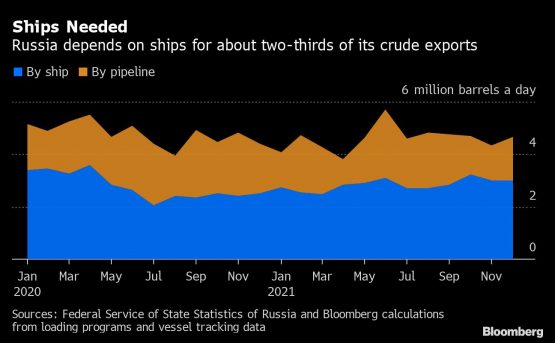