Grain traders are also keeping an eye on the latest efforts to restart exports from Ukrainian ports that have been blocked by Russia’s invasion.
By Megan Durisin and Jasmine Ng, Bloomberg 18 Jul 2022  12:04 Corn and soybean futures climbed to their highest in almost a week as hot, dry weather continues to plague key growing regions in the Northern Hemisphere.

Stretches of the central US were blanketed in heat advisories or warnings as of early Monday. The latest government outlook points to warmer-than-usual temperatures there stretching through the end of the month, and similar conditions are gripping swaths of Europe.

That poses a threat to crop production, particularly for corn fields which are entering their vital pollination period. French corn conditions have worsened lately, and the US Department of Agriculture will release its weekly update on the shape of crops later on Monday. Corn and soybean futures rose as much as 2% in Chicago. 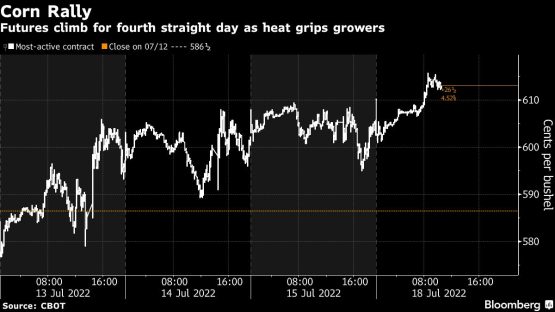 “The current hot weather remains to be monitored,” Paris-based adviser Agritel said in a note. “This is especially causing a deterioration to corn crops.”

Corn was up 1.5% at $6.13 a bushel in Chicago, while soybeans climbed 1.6%, with both commodities earlier touching the highest since July 12. Paris corn futures reached the highest in almost a month.

In Chicago, wheat snapped a five-day decline, with investors assessing a broader rise in commodities and major importer Egypt looking to book wheat this week from suppliers outside Europe.

The North African nation is seeking offers in a tender on Tuesday from the US, Canada, Australia, Argentina and Brazil, its state-run buyer said over the weekend. That marks a break from the norm, as Egypt typically sources wheat from the Black Sea region and European Union.

Grain traders are also keeping an eye on the latest efforts to restart exports from Ukrainian ports that have been blocked by Russia’s invasion. The EU’s foreign policy chief said he was hopeful Russia and Ukraine could clinch a deal this week and alleviate a growing global food crisis.