A decrease in US stockpiles and supply concerns from Iran are driving oil prices higher. Picture: Shutterstock

The prospect of tighter supplies from the US to the North Sea and Iran is helping oil recover this week from the longest losing streak since 2015. 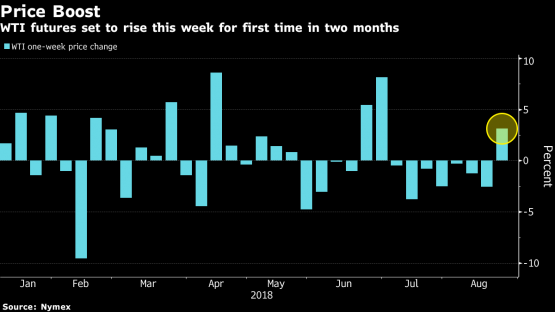 Futures in New York are headed for a 3.7% gain this week, the first advance in two months. In the US, latest data showed stockpiles dropped by more than twice what analysts had expected, while supplies in the North Sea are under threat from labor strikes at Total SA’s fields. Uncertainty also persists over how Iran’s exports will be affected by impending American sanctions against OPEC’s third-biggest producer.

The risk of supply disruptions as US inventories shrink is easing pressure on crude, which had fallen in mid-August to the lowest level in over two months. Everything from emerging market turmoil to a US-China trade tiff and signs that OPEC will fill any potential supply gaps had dragged prices down. Also contributing to the decline was a gain in the dollar, which reduced the appeal of commodities priced in the currency.

“The larger-than-expected decrease in US stockpiles, coupled with the uncertainty surrounding Iranian supplies, have pushed up oil prices this week,” Kim Kwangrae, a commodity analyst at Samsung Futures Inc., said by phone from Seoul. “But further increases will come under pressure as political issues such as the trade war are still ongoing.”

West Texas Intermediate crude for October delivery traded at $68.34 a barrel on the New York Mercantile Exchange, up 51 cents, at 2:35 p.m. in Singapore. The contract dipped 3 cents to settle at $67.83 on Thursday. Total volume traded was about 18% below the 100-day average.

Brent for October settlement increased 45 cents to $75.18 a barrel on the London-based ICE Futures Europe exchange. The contract is up 4.7 percent on the week. The global benchmark crude traded at a $6.85 premium to WTI.

Futures for December delivery was 0.9% higher at 512.6 yuan a barrel on the Shanghai International Energy Exchange. The contract is up 3.2% this week.

In the UK, talks between union members and North Sea platform operator Total broke down, according to union Unite. As a result, a series of 12-hour stoppages on the platforms was planned to take place on certain days in September and October on the fields that affect North Sea oil and gas production.

Elsewhere, government data on Wednesday showed US crude stockpiles declined by 5.84 million barrels last week, more than the 2 million decline that was expected in a Bloomberg survey of analysts.

Meanwhile, industry consultant FGE predicts that Iranian oil exports will drop below 1 million barrels a day by the middle of next year after the U.S. reimposes sanctions targeting its crude in early November. The Persian Gulf nation has shipped about 2.5 million barrel a day of crude and condensate so far this year, it said in an August 23 note.

Still, investors are also wary that a dispute between the U.S. and China could imperil global economic growth and weaken energy demand. Trade talks between the nations wrapped up Thursday without major progress, setting the stage for further escalation of the conflict between the world’s two largest economies.

While the conclusion of talks came just hours after the two nations unveiled their latest round of tit-for-tat tariffs, the U.S. is preparing a bigger tranche of tariffs on some 6 000 Chinese products to take effect as early as next month.