The war is exacerbating fears of supply shortfalls as Russia’s invasion of Ukraine cuts off cargoes of the staple crop.
By Megan Durisin, Tarso Veloso and Allison Nicole Smith, Bloomberg 16 Mar 2022  07:48 Futures in Chicago rose as much as 5.5% to $11.565 a bushel in New York after Putin criticised Kyiv to European Council President Charles Michel. The war is exacerbating fears of supply shortfalls as Russia’s invasion of Ukraine cuts off cargoes of the staple crop.

Wheat had already risen earlier in the session on signs of fresh crop demand as dryness parches key growing areas in the US Prices touched an all-time high above $13 earlier this month.

Major importer Turkey is seeking wheat later this week, and Iraq is looking for 50 000 tons. Algeria wants to buy barley, and some European countries are after American corn to help plug a gap as the war in Ukraine stalls its supplies abroad.

Data from several US wheat states showed drought taking a toll on fields as they emerge from winter dormancy, adding to bullish price signals. Less than a quarter of Kansas winter-wheat is in good or excellent condition, and ratings are similarly poor in Oklahoma, Texas and Colorado. A smaller harvest could add to the uncertainty surrounding global supplies amid Russia’s invasion of its neighbouring country.

“If you take out the old crop supply exports from Russia and Ukraine, we are seeing futures trading at fair value around $11 a bushel, so we will probably see this market chop around this $10 to $12-a-bushel range until we have more clarity for new crop weather and sanctions,” said Ben Buckner, grains analyst for AgResource Co. in Chicago in a phone interview. 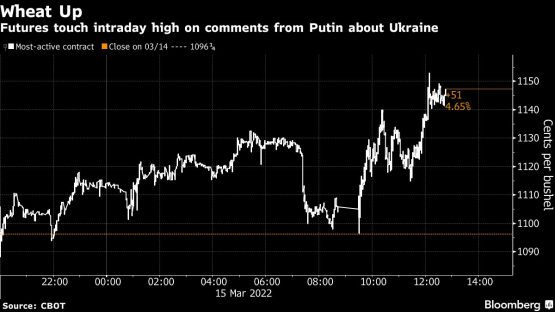 That comes as Brent crude prices fell below $100 a barrel, rattled by a fresh coronavirus outbreak in China and signs of progress in cease-fire talks between Ukraine and Russia. While still high historically, the losses could shake the bullish sentiment across commodities since the war erupted and weigh on demand for crops used to make ethanol and biofuels.