Did active managers outperform in the crash? 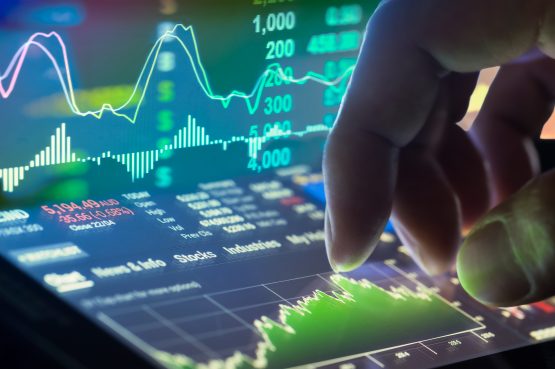 Smaller, more nimble funds that can shift their portfolios more easily and more aggressively seem to have an advantage. Image: Shutterstock

One of the biggest advantages active managers have is their ability to manage risk. Unlike passive funds, which must buy and hold an index, active managers can shift their portfolios as market conditions change.

This is what supports the argument that active managers will outperform when markets fall. While index funds must decline in line with the market, active managers are able to get some protection in cash, and by picking stocks that will be less affected.

There is also some evidence that they do this. Style Analytics, a factor and ESG (environmental, social and governance) analysis firm, published research just last month showing that when markets fall the top-performing managers outperform the market more often than when markets go up. This was based on 25 years of data from 1995 to 2020.

The analysis also found that in the four most severe down markets over this period, the top-performing active managers were even more likely to outperform. This is evidenced by analysing fund returns during the tech bubble in the early 2000s, the global financial crisis from 2007 to 2009, the debt downgrade in 2011, and the taper tantrum in 2018.

During these four periods, active managers outperformed at an even higher ratio than during more benign negative markets.

Research published by Morningstar two years ago made similar findings. Analysing a 20-year period – February 1, 1998 to January 31, 2018 – Morningstar noted that, on average, more than half of US equity funds underperformed a relevant index over rolling 36-month periods. This is illustrated in the graph below. 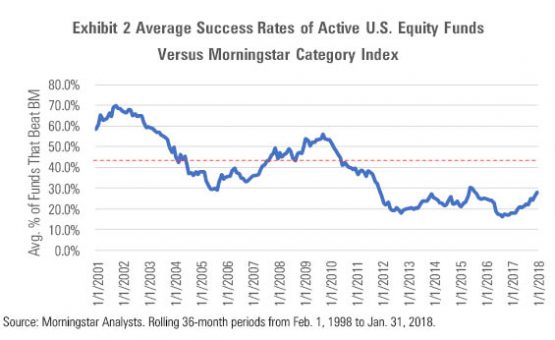 However, Morningstar identified that there was a distinct difference in how active managers performed in those 36-month periods when the benchmark index was up, and those when it was down.

“We found that active US equity funds were indeed likelier to succeed in down periods than up periods during the 20-year span we examined,” noted the author of the research, Jeffrey Ptak. “All told, nearly 60% of active US equity funds outperformed their bogy in down periods, on average. By contrast, only about 32% of active US stock funds beat their indexes in up periods, on average, meaning the odds of succeeding were almost twice as good when the market was down than when it was up.”

However, as Ptak noted, these findings come with two significant caveats. The first, and most obvious, is that markets go up a lot more than they go down.

Even though active managers were more likely to outperform in falling markets, they were still more likely to underperform when considering the full 20-year period.

“Moreover, when active funds succeeded, they tended not to sustain their outperformance,” Ptak pointed out.

“Only about a third of successful funds went on to outperform in the next, non-overlapping 36-month period.”

In other words, investors still have to identify in advance which funds are going to outperform. And that is notoriously difficult, particularly because past performance is no guarantee of future success.

This is an important consideration to bear in mind when looking at how local equity funds performed during the recent crash. According to analysis from CoreShares, 31% of South African general equity funds outperformed the CoreShares Top 50 ETF from the market open on February 24 to the close on April 6.

Read: The impact of Covid-19 on markets

This is significantly higher than the 6.1% of active funds that beat the S&P South Africa Top 50 Index for the three years to the end of December 2019. Quite clearly, then, active managers were better able to add value over this period.

However, it was still far from a majority that outperformed. Most active funds did not.

And, significantly, investors hardly demonstrated an ability to identify these outperformers beforehand. As CoreShares found, eight of the 10 largest local equity funds underperformed the CoreShares Top 50 ETF over this period.

As these 10 funds have a market share of 49%, one can safely say that investors did not show any great prescience in their fund selection.

In fact, the funds most likely to outperform were smaller, more nimble portfolios that could shift their portfolios more aggressively and more easily. These are funds with relatively small market shares. Looks like 99% of Fund Damagers are missing out on the biggest bull market of our lives..

The Corion report shows how the local fund managers have performed (underperfomed) over different time periods. While March may be a significant drawdown across most funds that where overweighted equities , the longer term picture of these funds is dissapointing as measured over 3 and five year periods – often most of them underperfroming cash. All the large names that comment via their fund managers and advisors are on this platform…i dont think they have added any value to their clients and they are doing a disservice to their clients

An exercise in futility – to consider what active managers made the least loss on monies invested – when the losses in any case exceeds minus 18%.

An interesting analysis would be how well or not, the various classes of Income Generating Funds have performed during this current market fall-out.
Why some held up and some took a beating (i.e. the Truffle Flexible Income Fund). What the return is for these funds after the fall over 1, 3 and 5 years in comparison with the performance of the ALSI.

Equity performance statistics means nothing to an investor, if you are not able to realise that return (barred absolute coincidence). The very many articles about wealth creation through the good performance of equity funds over various periods (as also carried by MoneyWeb) has become obsolete and worthless after the market fall-out.

The main purpose of investing is to accumulate some reserve pot at some acceptable rate of return to satisfy a certain goal or need at some point in the future. If the investment vehicle do not allow readily realisation of your accumulated funds at a real or positive value when reaching the target date, one have to question and be realistic about the ability or
inability of such vehicle. Sporadic but in-realisable performance is of no value to the average investor.

I have said it before and will repeat it again – the annual performance of stock markets showed a real positive return per annum for only about 33% of the time over the past 91 years (measured up to end of March 2020, which terrible performance record speaks loud enough for itself.

Alap : the elephant in the room is fees.

By any longterm measure equities with dividends reinvested beat any other asset class. The big caveat is if one deflates that performance by the friction of about 2% for funds under “management” lost to fees. Compound fees is the fugly cousin of compound earnings.

Who pays their dentist based on their net worth?

For those that don’t have the time, 0.01% AI investing will be a sure bet : choosing a good AI engine is a matter of disruption and education as sure as going short Sears long Amazon was a decade ago

Well, if money market rates (the safest bet in an uninvestable market) continue dropping, very soon the fees on local passive or active funds will exceed even that return. Then, maybe, investors will take back responsibility for their investments.

So far, in my personal capacity, I’ve made 21% in the past month.

I leart from the 2008 crash that fund managers are worth nothing.

I’m open to any of them proving that they are, and can beat my perdonal returns.

Did you leverage? Bought SASOL?

What are your correctly calculated personal returns over recognized periods? I ask because the majority of people making the kind of claims that you are don’t even know how to calculate returns. I can also find a period where my portfolio beat Warren Buffett but that means absolutely nothing.

The headline refers specifically to “the crash”

No there is no way that it is going to drop from where it is now.

Will I give me secret away? No.

Sparkie, until you have sold out the investment you are referring to, and have the cash in hand, you have actually made no real profit at all. Also return on investment is the net return after realising (cashing out) the investment – in other words after the eat away effect of buy-sell spreads, fees, taxation, inflation effect, etc Before you know, the price turns around, and gone is the paper figures of what you now see as “profit”.

The Spark. Thanks for a good laugh. Not sharing your IP!