Companies have this year brought the most initial public offerings to the Johannesburg Stock Exchange since 2007, with the value of deals rising to the highest since 2010, according to data compiled by Bloomberg. The sales have been helped by a resurgent October following a third quarter in which there were no IPOs at all, emulating other emerging markets after a rout in global equities and commodities.

More South African offerings are in the works, with the country’s benchmark equity gauge within 5 percent of the record it reached in April, when shares were trading at all-time high valuations. Stocks have recorded gains as domestic companies expand elsewhere in Africa or Europe to tap revenue streams outside of South Africa, where a power shortage, a slump in raw material prices and labor strikes contributed to an economic contraction in the second quarter.

“The market is at a very high level, and our valuation multiples are very extended, which means that you can list your company at quite an attractive valuation,” Patrice Rassou, who helps oversee equities among the $30 billion in assets at Sanlam Ltd.’s investment-management unit in Cape Town, said by phone. With borrowing costs set to rise if the U.S. and South Africa increase interest rates, companies also want to “reduce their dependence on fixed income or other forms of financing,” he said.

South African companies have raised a record amount of capital this year, boosted by mergers and acquisitions and rights offers, according to data provided by the JSE Ltd., which operates Africa’s largest stock market. Companies issued shares worth 175 billion rand ($13.2 billion) in the nine months through September, compared with 125 billion rand a year ago, the JSE data show.

As part of those capital raisings, there have been 13 South African offerings announced this year worth a combined 9.93 billion rand, the highest value since the 2010 peak, and compared with four in 2014 valued at 4.96 billion rand. Six are earmarked for October.

Across emerging markets, the value of announced IPOs dropped 49 percent to $49.9 billion this year, even as the number of deals increased to 916 from 745 for all of 2014. Sales in the third quarter tumbled to $9.8 billion from 229 transactions, compared with $28 billion from 452 deals in the previous three months.

The FTSE/JSE Africa All Share Index jumped to a record on April 24, pushing the South African benchmark to trade at 17 times estimated earnings, the highest ever. The gauge is up more than 6.6 percent this year, even after tumbling to an eight- month low in August during the global selloff spurred by concern that China’s economy is slowing.

“It’s a brave move to still go ahead in the current environment,” Grant Cullens, the chief executive officer of African Alliance Asset Management Ltd., which has $1.2 billion in funds, said by phone from Johannesburg. “They could be proved to be very fortuitous and get away with it. Equally, they may find that they’ll end up trading at a huge discount or a discount for some time to come.”

Business confidence in Africa’s most industrialized economy slumped to its lowest in 22 years in September, while manufacturing has contracted for six out of the eight months measured this year. The International Monetary Fund last week cut its forecast for South Africa’s growth in 2015 to 1.4 percent from a previous estimate of 2 percent.

Still, all six of the IPOs that started trading this year have made gains, with NVest Financial Holdings Ltd., a consultancy and private-wealth management company, more than doubling in value since it listed at the end of May.

“We have a good pipeline of potential listings,” Donna Oosthuyse, director of capital markets at the Johannesburg-based exchange, said in an e-mailed response to questions. “Market sentiment and the company’s ability to raise capital will ultimately have an influence on their listing date.”

Waco International Holdings Ltd., which rents out products from scaffolding to portable sanitation, plans to raise as much as 3.5 billion rand in the JSE’s biggest share sale this year to facilitate the partial exit of private equity investors. Sygnia Ltd., a Cape Town-based money manager with 140 billion rand in assets, jumped 82 percent in its debut on Wednesday following a sale of shares to selected investors that was almost 20 times oversubscribed before the listing, while International Hotel Group Ltd. gained 7 percent.

Balwin Properties Ltd., a residential-housing developer, starts trading on Thursday, while Capital Appreciation Ltd., a company set up to make acquisitions, plans to trade in the specialty finance sector of the JSE’s main board on Friday. Dis- Chem Pharmacies (Pty) Ltd., South Africa’s second-biggest pharmacy chain by number of stores, said last month it hired advisers to help with a planned share sale next year.

“There’s never a good or bad time to list,” Patrick Mathidi, a money manager at Momentum Asset Management Ltd. that oversees the equivalent of $25 billion, said by phone from Johannesburg. “If a company has got a good story to tell, good prospects for growth, then there’s always a market for it.” 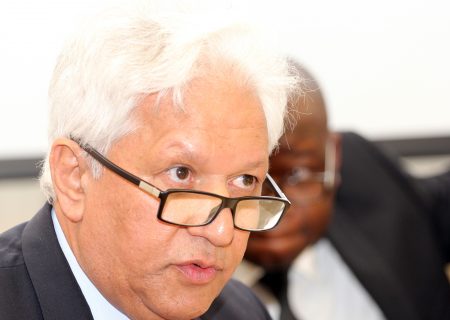