Judging by the 70% beating that former SPACs have taken since they peaked early last year, a lot of investors are leery of blank-check companies.
By Bailey Lipschultz, Bloomberg 3 May 2022  11:08 Judging by the 70% beating that former SPACs have taken since they peaked early last year, a lot of investors are leery of blank-check companies — which is why Enrique Abeyta likes some of them.

“Everything was going to the moon, and now SPAC is a curse word,” said Abeyta, who follows special-purpose acquisition companies as editor of Empire Financial Research. “That’s turning itself into a spectacular stock-picking opportunity.”

It’s not like you could throw darts at a list to find prospects, but a sampling compiled from Bloomberg data shows more than 30 companies that went public via SPAC mergers trading at modest multiples of something that their more speculative peers lack — real cash flow and net income. Some come with unanimous buy recommendations from analysts who follow the stocks.

They range from a payments firm trading at about 12 times Ebitda, an enterprise software company at 7 times earnings and a convenience store operator with a price-to-sales ratio well under one. 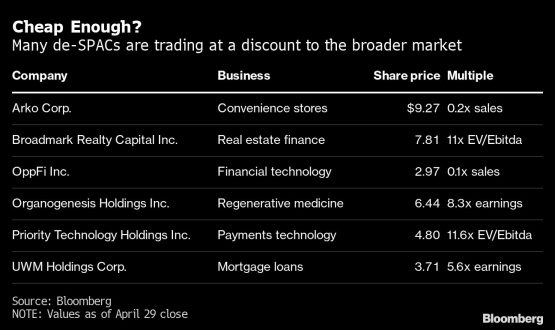 “Take every SPAC sub-$1 billion and if it’s Ebitda or net income profitable to any significance, I bet those are really good calls,” Abeyta said. “If they’re sub-$1 billion and losing money, I bet you they’re probably zero and that probably accounts for two-thirds of the SPACs out there.”

To be sure, many of the ex-SPACs are cheap for good reason, and the definition of cheap depends on which metric and benchmark are used. That said, former SPACs that trade at enterprise value-to-Ebitda below 10 with unanimous analyst endorsements include convenience store owner Arko Corp., industrials firm Alta Equipment Group Inc. and corporate facilities provider Target Hospitality Corp. Others trading at EV multiples lower than the S&P 500 Index include Priority Technology Holdings Inc. and Organogenesis Holdings Inc.

Priority, a payments technology firm, has dropped by more than half after a SPAC merger in July 2018 despite growing revenue by 27% to $514.9 million last year; analysts expect improving cash flow and profitability on the horizon. It trades at 11.6 times EV to Ebitda and a price-to-sales ratio slightly below one. Peers generally trade 19 times EV-to-Ebitda, Bloomberg data show. The two analysts who cover Priority both have buy recommendations.

Organogenesis, which sells regenerative medicines including a diabetic foot ulcer treatment, grew net revenue by 38% to $468.1 million in 2021. Its enterprise value-to-Ebitda ratio is roughly 10 and all four analysts that cover the stock recommend it, with an average 12-month price target that implies potential returns of nearly 200%. 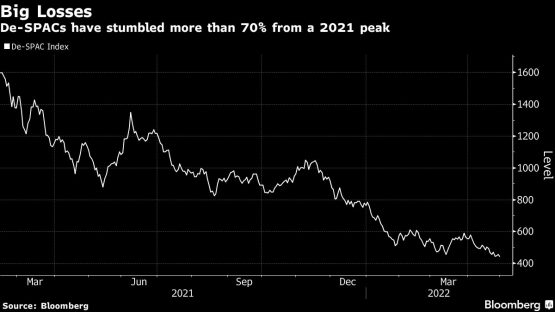 Some ex-SPACs that have been around since before the boom years have shown what’s possible. Hostess Brands Inc., the maker of Twinkies and Ding Dongs, has roughly doubled since it went public via SPAC back in 2016. Pretzel and chipmaker Utz Brands Inc., which went public in August 2020, turned in a 16% annualized return since the deal was announced.

Truist analyst Andrew W. Jeffrey points to potential upside from Paya Holdings Inc., which is down by 55% since it went public via SPAC in October 2020. The Atlanta-based payment firm, which serves business-to-business users, trades at a discount to its peer group measured by price-to-earnings. Revenue rose 21% in 2021; if 11 analysts who recommend the stock are right, Paya will start posting full-year net income in 2022, giving it a p/e ratio of 13 times forward earnings.

“Some of these SPAC names have been tarnished with the scarlet letter of being a SPAC, and that’s an opportunity,” said Darren Chervitz, a portfolio manager at Jacob Asset Management. “The pendulum swings wildly in each direction — and I think we’ll see that pendulum swing back pretty aggressively to the other side.”