Cycle theory has a pretty good track record in calling out the tops and bottoms.
By Ciaran Ryan 6 Jul 2020  00:05 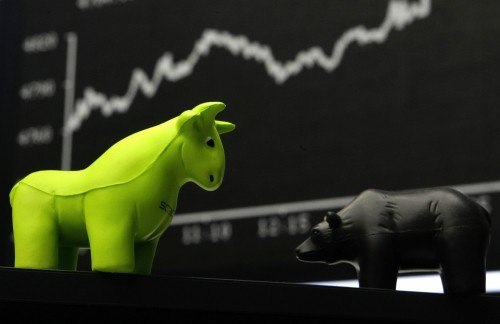 Patterns and cycles are revealing, but they are still probabilities, not certainties. Image: Reuters/Alex Grimm

These are indeed strange times. The coronavirus crash and rebound have stumped many professional fund managers, with some suggesting it is the so-called Robinhood investors gorging themselves on whacked-out travel, cruise ship and entertainment stocks.

These were hardest hit during the March crash, and many were priced for bankruptcy. Hundreds of thousands of young retail investors, many of them teenagers who get their stock tips from social media sites such as Reddit, have shredded conventional stock analysis to crest a wave that seems immune to both logic and gravity. Even bankrupt car rental firm Hertz has become a popular speculative stock among a new generation of online investors with just a few hundred dollars to their names.

Research by Goldman Sachs equity strategist David Kostin shows the most popular stocks on the commission-free Robinhood and Robintrack platforms – popular among retail investors – had gained 61% as of mid-June, thrashing the 36% rebound in the S&P 500 over the same period.

Rebound not reflective of real life

The fact that the US Federal Reserve pumped $2 trillion (R34 trillion) into the money system in recent months may also explain the strength of the rebound since March. It certainly doesn’t bear much relation to the global economy, which the International Monetary Fund expects to contract 4.9% this year.

The truth is that most of these traders rubbing their hands in profits will end up losing.

Don’t take my word for it. The European Securities and Markets Authority (Esma) requires European-registered brokers to disclose how many of their clients lose money. A survey of 30 brokers by the Finance Magnates Intelligence Department found that an average of 76% of clients lose money. That means only roughly a quarter are winning. The best broker had 35% of its clients in the win column, largely due to a tool that allows clients to follow trade suggestions.

“If any trend emerges from this data forced upon us by the Esma, it is that brokers should race to build up a client base which is better informed,” says Finance Magnates. “The number of additional tools and tools that actually work and provide insight will be crucial.”

Heeding this advice, Moneyweb reached out to the US-based Foundation for the Study of Cycles. We were referred to a few presentations, one of them by doyen of technical analysts, Sherman McClellan, who has been studying charts and cycles for more than four decades. He is also the inventor of the McClellan Oscillator and founder of the McClellan Newsletter.

McClellan turns charts upside down and inside out to reveal fascinating insights.

For example, there is a correlation between oil and gold prices – with a nine-year time difference. In other words, oil is nine years ahead of gold. So if you want to look into the future, take an oil chart, wind it back nine years and you’ll get a sense of what’s in store for gold.

McClellan also suggests that 2024 looks like a down year for stocks, followed by a weak recovery and a more serious downturn in 2030. That’s a galaxy away in stock market years.

There a reasonably tight correlation between the US stock markets and the JSE, so it is worth paying attention to the mother ship.

The number of US stocks going up versus those going down peaked in January this year, then started to shift lower – a key tell that prices were going to follow. This so-called advance-decline line has since roared back up to where it was in January, with prices following suit.

Gold is likely to top out in the second quarter of 2021, according to McClellan’s study of the charts. Interestingly, the massive $2 trillion monetary injection by the Fed may have interfered with the amplitude of these cycles, but it has not disrupted the timing.

Dr Richard Smith, head of the Foundation for the Study of Cycles, says most people understand that cycles are a feature of nature, whether we’re talking about the weather, politics or fashion.

“The longer we study the markets, the more we start to understand the patterns and cycles embedded in the prices. The question is how can people use this information to be better investors? Cycles are probabilities, they are not certainties. They can give you an edge in terms of probabilities.”

For example, the S&P 500 has been observed to have two particularly strong cycles, the longer one being 170 trading days, the shorter one 26 days. The 170-day cycle bottomed in mid-April 2020 and is expected to peak in early August. The same is true of the Dow Jones Industrial Average.

“This cycle is detecting cyclical pattern in price,” says Smith.

“These are like headwinds or tailwinds for a trader. You still need a proper trading set-up, trigger and follow-through.”

A trigger is a secondary indicator that tells you when is a good time to enter a trade. Many traders use advance-decline lines (which measure the number of stocks going up or down on any particular day), and look for a divergence with volume indicators that track the volume of stocks traded against up or down moves in price. At the start of a down cycle, big volumes are usually seen being traded in a small number of declining shares, yet the overall market continues rising. This can give a signal of a possible turn in the overall market.

Another interesting observation from cycle theory: bad things often happen in years ending in 0 (like 2020).

“There was a watchfulness in the cycle community for something like this,” says Smith. “The market topped on February 19 and our short-term cycle indicator anticipated this.”

Looking at the charts below, the pink lines anticipate market tops and bottoms. On this basis we should watch for a market top in the S&P 500 in August, followed by a weakening through to the later part of the year.

Gold may also go through a period of consolidation or weakness until September before its next up-cycle.

Source: Foundation for the Study of Cycles

Source: Foundation for the Study of Cycles

Never stop reading and educating yourself!

Investing is a very brave word for many right now.

Just buy EOH and you will be fine… 🙂

To be followed by a massive collapse

Lost me at ” Study of Cycles”.

If they’ve got a definitive quick rich trading system, why the writing newsletters and asking for subscription money?

Is it perhaps because cycles trading are neither quick rich nor legit?

Aye, “cycling” is but one leg of investing; Mr Buffet’s view is the other. I admit I have not made money from personal investment; thanks Steinhoff, listed property and construction. But the brokers and advisers, as well as most of the company executives of the above have done very nicely thank you.

That should tell the small investor something.

“Another interesting observation from cycle theory: bad things often happen in years ending in 0 (like 2020).”

Seems like some sort of alchemy to me. Or superstitious beliefs

Guess where a lot of your pension is invested? Mostly in cash you think? Ever heard of Regulation 28? Do you think a shopping mall investment is prudent? Don’t wait until the age of 65 to find out….