Any investor who got through March 2020 will have a story to tell their grandchildren. The turmoil in global stock markets last month will be remembered as one of the most significant market events in history.

The heatmap below shows how widespread the sell-off was. 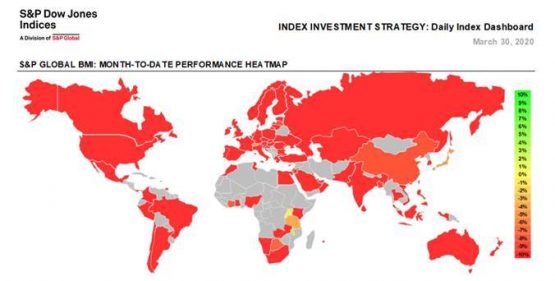 “U.S. equities posted their worst quarter since 2008, with the S&P 500 down 20% and smaller-caps performing even worse,” notes Chris Bennett, Director, Index Investment Strategy at S&P Dow Jones Indices (SPDJI). “The S&P Europe 350 fell 14% in March to complete a 22% drop in the first quarter, the worst monthly and quarterly performance since September 2002. Very few countries have limited the losses to single digits this month, and March will be the worst month since October 2008 for the S&P Global BMI.”

In total, nearly $8 trillion was shaved off the market capitalisation of equity markets worldwide.

As the table below shows, even though markets around the world have generally recovered from their lowest points, the losses sustained are still extreme. Only Japan, Switzerland, Hong Kong and China finished the month better than 20% down from their 2020 highs. The worst hit markets were those in Latin America, particularly Argentina’s MERVAL Index, and South Africa. Despite a 12.5% bounce off its lowest point, the S&P South Africa Composite was still 41.1% down from its 2020 peak at the end of the month.

The ups and downs

The speed of the sell-off is illustrated by the fact that March recorded six of the S&P 500’s 10 largest daily point losses in history. The largest of these was three times the biggest drop of any day in 2008.

In amongst these losses, however, the S&P 500 also saw its seven largest daily point gains ever. The jumps of over 9% on 13 March and 24 March were also the ninth and 10th largest daily percentage gains the index has ever experienced.

This level of volatility is unprecedented. The VIX, which measures volatility on the S&P 500, closed at a record high of 82.69 on 16 March.

…and the scary thing is, it’s no April’s Fool joke either!

How do you (practically) tell your grandchildren this scary story in such a way to keep their child-like interest?

“….but first let me take a large bite off the ice cream! 🙁

(….and the rest of cone slips out of Grandpa’s hand, landing on the floor, with Rover (or Snuffels) licking it up.)

This is a game changer of seismic proportions…

The days of buying Chinese goods and allowing their economic colonialsm are over.

But then, there will always be the China apologists who look to them as the “antidote” to the Big Bad US.

China’s ‘Economic colonialism’. What does that mean exactly?

Funny how the more people hate China the more China thrives. How does that work really?

America’s COVID-19 death’s are nearly 1000 more than those of China yet the Dollar is still a strong currency. Whats wrong with the world markets… “Hey is everyone out there nuts?”…

BangBoom: Spokesperson for the Trade Unions or EFF ??

not many people believed the Chinese stats…

But yes, right now an investor sitting in cash dollars might do well putting some of that in emerging markets – but in very selected emerging market equities, not broad indices

Turns out it is a vote for the us$ and against every other currency that wanted to take them on. Interesting enough, the us$’s people hold are losing some value right now as the US Fed prints more money to “give?” to corporations such as banks but people still trust it to be the main currency.

If China had their head screwed on right they would be dumping bonds and buying up big World companies stock.

I think the US will be the last man standing here, their economic depth is just insane. Hopefully China gets a proper PK

We are not even one fith of the way through the Corona crisis yet. Just wait. Worst is still to come.

Despite the equity losses still smooth sailing for Government employees and union members and…almost forgot, taxi operators. Despite a national lockdown you can as the taxi industry go to the Minister of Transport – I thought this was a health crisis not a transportation issue – threaten your usual disruption and get your way in no time.