Current market darlings include industrial Reits with well-positioned assets, such as those near ports, which are less susceptible to supply competition. Image: Shutterstock

Like many asset classes, real estate investment trusts (Reits) find themselves at an important juncture in 2019. The potential for rising interest rates over the medium to long term is threatening the strong returns achieved from this asset class over the last decade. This comes at a time of stretched valuations, adding further risk to an already complex setting.

A quick scan of the globe shows that Hong Kong has been the best performing Reit market in the 12 months to February 2019. With ongoing trade wars between the US and China, this result shows that investors are favouring domestic assets which are likely to be less impacted by these tensions. The expectation that the US Federal Reserve will delay raising interest rates is another reason we are seeing this shift.

On the local front, and in contrast to Hong Kong, South African Reits were among the worst-performing. However, this is perhaps nuanced by a large sell-off in early 2018 due to reports from Viceroy around certain valuation principles followed by listed property providers.

Over the next decade, Morningstar believes that Reits are likely to face two significant headwinds. The first is a predisposition of stretched valuations and reasonably high debt, and the second is a vulnerable growth rate that could easily move back towards trend and result in pockets of divergence.

Market darlings at the moment include industrial Reits. However, Morningstar feels that investors should be aware that this is currently a relatively crowded trade. When considering industrial Reits, investors with unique and well-positioned assets, such as those near ports, are less susceptible to supply competition.

Put together, the large price increases over the past five years may unwind, posing a potential danger to real estate investment.

In addition, we would add that new construction has been moderate – approximately in line with demand – keeping vacancy rates stable combined with rising rental charges. Any increase in interest rates, which could reasonably be expected over a 10-year-plus period, would pose a challenge to Reit pricing going forward.

· Rising interest rates over the medium to long-term, especially in the US market;

· Slowing economic growth or an inflation shock (particularly in the US or China);

· Retail pressure, especially in developed markets. For example, the trend in the US, Australia and the UK is to have destination malls with more food and service.

Morningstar provides context by reflecting on the global financial crisis, where many of the largest Reits in the UK and Australia had to undertake ‘rescue’ rights issues due to high gearing levels involved in the sector. This was exacerbated by the significant devaluation of properties at the time.

Given a similar setting today – with stretched property valuations, continued reliance on debt and an asset class that is sensitive to interest rate changes – it should not be controversial to say that leverage concerns could resurface if asset valuations were to fall significantly from here.

So where are we seeing opportunity?

Value-orientated investors may find opportunities among retail Reits and/or South African Reits, but there are risks that need to be balanced with the potential reward. While Reits can be a diversifying asset in a multi-asset portfolio, Morningstar is of the opinion that high valuations would lead to adopting a lower weight at the present time.

The Reit sector has grown significantly over the last two decades – both in terms of Reits being introduced in new countries, as well as the increase in the size of the sector across existing jurisdictions. It is estimated that the global Reit market currently exceeds US$1.2 trillion.

The bulk of these assets remain in the US, accounting for more than half of the global Reit market. Other prominent markets include Europe (both the Euro area and the UK), Hong Kong, Australia, Singapore, Japan and smaller markets such as South Africa.

Underlying this, prices have already come down considerably in several areas, such as retail Reits, while other areas like industrial assets have propped up the performance numbers.

The question that needs to be asked is why the prices have deviated so significantly and what specific risks investors are already pricing in (versus those that they can’t yet see).

For example, the UK faces an interesting period, in part due to Brexit fears that are likely priced in, although we would caution that risks remain. 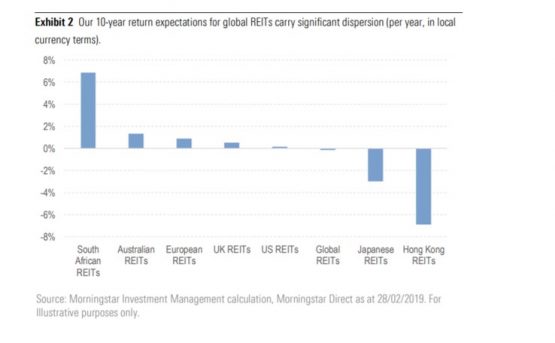 Eugene Visagie is a portfolio specialist at Morningstar Investment Management.

Typical meaningless fund manager jargon. Leverage concerns meaning they were greedy and borrowed too much. Combine that with “stretched property valuations” haha – meaning they have overvalued the property to get big loans – and they have big leveraged trouble ahead. But good luck.

Listed property is due a revaluation of the order of many multiples of Steinhoff. But don’t worry, it is just a journal entry. no different from the journal entries that created those values.