A closer look at the SA property sector

Property counters have proven to be excellent sources of income even in volatile markets.
By Kamil Maharajh 15 Dec 2015  00:02 The South African Listed Property Index (J253), commonly known as the Sapy, currently contains 22 counters with a total market capitalisation of R393 billion (3.8% of the Johannesburg Stock Exchange All Share Index, the Alsi) as at 14 December 2015. It is made up of the various types of listed Real Estate Investment Trusts (REITS) in SA. The sector has seen steady inflows but has remained at around 4% of the JSE since its inception in March 2002.

There are currently 38 funds in the Asisa property sector (SA Real Estate General), with an average size of R1.3 billion assets under management (AUM) per fund. The requirement for funds in this sector is to have a minimum of 80% invested in listed property shares, which include collective investment schemes and REITS. The funds are also only allowed a maximum of 10% in companies with similar businesses to each other. The largest fund is currently the STANLIB Property Income fund with R7.6 billion. The property sector has been the best performing asset class since its inception, returning 437% cumulatively versus the JSE Alsi’s (J203) 332%, the All Bond Index’s (ALBI) 240% and Cash Index’s (STeFi) 186%, rebased to 100 in March 2002. It is evident that, barring August 2008, the Sapy index has been able to provide marginally better capital growth than the other asset classes since its inception over the long term. Property counters have proven to be excellent sources of income even in volatile markets, delivering an average of 2.7 times the dividend yield of the Alsi. The graph below illustrates the dividend yields between the Sapy (J253), Alsi (J203) and Albi. Even though the Sapy and Alsi are gradually converging towards one another with the Albi remaining relatively stable, the property sector has been able to consistently deliver higher, albeit more volatile levels of income relative to the Alsi. However, it is becoming increasingly more difficult to determine for how long this trend will continue.

Dividend yields for all the counters that were listed before 2008 have been steadily decreasing since the inception of the Sapy (2003). This has been due to the dramatic increase in property valuations over the past 12 years, which have been increasing faster than their distributions. Property companies that listed after 2008, on the other hand, have seen sharp increases in their dividend yields since 2008 as their distributions have been growing faster than their AUMs. The dividend yield of the J253 is currently at 6.1%. 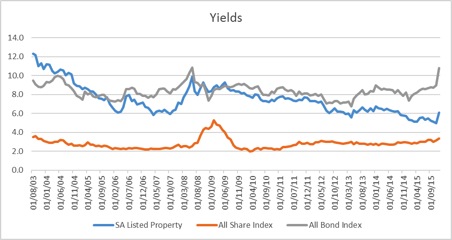 The 22 counters in the property sector provide a constantly growing challenge for asset managers to actively manage their portfolios to outperform their Sapy benchmark. The index’s market capitalisation is dominated by a few large companies, with the top four accounting for 50.8% of the total. This has made it increasingly difficult for the much larger funds in the sector to move in and out of positions as swiftly and efficiently as they would like and thus actively manage their risk. As an example, if a fund with an AUM of around R6 billion wanted a 10% exposure to any of the smaller counters, it would own between 10.6% and 29.3% of the nine smallest companies in the index. This poses liquidity problems if the fund ever wishes to sell out of these companies.

Many funds in the sector are benchmark cognisant, constructing their portfolios according to the index and then taking relative over- and under-weight positions. There are certain shares that, as a result of their size in the sector, will always have to be held in funds managed this way. Growthpoint, Redefine and Resilient are examples of this as they are largest three property counters and have been around since the inception of the index. There are a handful of benchmark agnostic funds in the sector, such as the ABSA Property fund and Nedgroup Investments Property fund. These funds are not constructed relative to the index, which makes them behave differently to the majority of the other funds in the sector when markets are more volatile. The property sector continues to be interesting due to the fact that there are only a few listed counters. This is making it more and more necessary for asset managers to actively manage their portfolios and take larger over- and under-weight positions, relative to the Sapy, in order to find that alpha and outperform the index and peers. The last thing we would like to see is more and more funds evolving into ‘tracker funds’, which would track the index while only being able to take small active positions.

Kamil Maharajh is an Investment Analyst at Glacier by Sanlam.