FNB's John Loos doesn’t believe that the drought and possible further water shortages have had a noticeable impact on house prices. Picture: Shutterstock

The rate of growth in residential property prices on the Atlantic Seaboard in Cape Town has dropped by nearly two-thirds over the past year to a fraction above 10% year-on-year. This is a significant cooling from the multi-year high of 27.2% in the fourth quarter of 2016. In five of the past eight quarters (2016 and 2017), average house price growth in the most expensive area of Cape Town, which stretches from Green Point to Hout Bay, has been above 20% year-on-year.

FNB household and property sector strategist John Loos writes, “It is possible that a slowing in the rate of foreigner buying of SA property last year, due we believe to a widespread negative sentiment towards South Africa at the time, could have had some negative impact on price growth in this sub-region, which is typically big on foreign owners and buyers. But again, we believe that 122.8% cumulative house price growth of the past five years has been key in leading to major affordability challenges, which ultimately must slow demand from both foreigners and locals alike.” 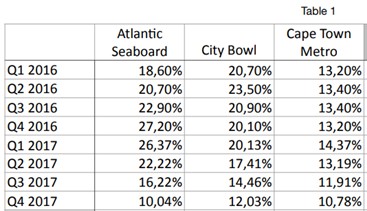 Since 2013, average house prices have more than doubled in the three areas of Cape Town, including two of the most expensive three: Atlantic Seaboard (123%), City Bowl (113%), City Eastern Suburbs (105%).

The February FNB Property Barometer for City of Cape Town House Price Indices highlights this “noticeable” slowing across these regions of the metro “against Table Mountain”, which Loos argues is a direct result of home affordability challenges here are contributing to a “natural” price growth slow down.

While house price growth in the Cape Town metro, as a whole, remains strong (up 10.8% year-on-year in Q4 2017) versus other metros in the country, as well as the national average, this was the sixth consecutive quarter of slowing. The slowdown is not across the board, however. Three of the more affordable regions in the city – in the so-called ‘Northern Suburbs’ – are showing acceleration. Broadly, the trend still remains strongly upwards since the lows in 2009.

Even though there was a slowing in the strongest-performing of these regions in the fourth quarter, the Western Seaboard (Blouberg, Milnerton and Melkbosstrand), this was only a slight dip and growth remained robust at 13.9% year-on-year.

The broader Bellville area accelerated from 9.5% in Q4 of 2016 to 13.3% in the last quarter of last year, while the North Eastern Suburbs (Durbanville, Kraaifontein, Brackenfell) have gathered pace to 10% year-on-year in the fourth quarter. Growth in the Cape Flats and Mitchells Plain/Eerste Rivier areas has been equally robust, with the latter actually jumping to 20.83% in Q4 2017, the highest level of growth across the metro’s sub-regions.

Loos doesn’t believe that the drought and possible further water shortages (a Day Zero scenario) have had a noticeable impact on house prices, yet.

“Going forward, however, should the drought conditions deteriorate further, at some point it is conceivable that they may become ‘recessionary’ for the Western Cape economy, should they reach a level where much industrial production needs to be scaled back and a lack of water hampers tourism and other economic sectors. A negative economic and employment impact should ultimately be a negative housing market impact. But we don’t believe that it has got to this level yet, and much will depend on this Winter’s rainfall.”

The statistics we use in our calculations all depend on what we want to prove. The prices in the Atlantic Seaboard are supported by foreign buyers. The rand strengthened by 13% over the past 12 months, so prices increased by 23% in dollar terms. That is a strong bull market in any man’s language.

So what does this prove? It proves that the drought in the Western Cape caused the rand to strengthen…..

Exactly. Every time i flush my toilet the Rand strengthens…..

Many a time I advised people to buy in Rondebosch East. They pulled their noses up at the idea. Now they simply can’t afford to buy in the area!!! LOL

I called this months, if not a year ago, and all the grootbek smug Capetonians bleated on about the Cape being God’s Gift to humankind…

Hold onto your overpriced matchbox “investments”, it’s going to be a long wait till you see any real appreciation especially after Day 0 and the ANC under Cyril take over in 2019…

Oh and don’t forget the new 2018 valuations kicking in in a year or two, the DA loves shafting ratepayers with exhorbitant rates (they can’t even supply water out of the taps though).

Why do you always have 12 likes on your messages? I smell a rat.

LOL, rfjok and Rob are not as ?accurate? as a broken watch. DayZero has been pushed out to JULY, but they, birds of a feather were parroting MAR18, APR18 etc. Continue staying in your shithole up north rj – on a serious note can you actually afford properties in the more affluent areas of Cape Town? Perhaps a missed opportunity back in the day when you possibly could have afforded it, but thought, it can go no higher, not worth it? Your lack of understanding amongst others things has benefited others, we all thank you for providing us with opportunity!

Why all the ongoing hate towards W/Cape?

You MUST BE a sour grapes SHARKS-rugby supporter, whose team lost out to Western Province in the 2017 Currie Cup final, right in front of the Natal home crowd in Kings Park.

Proves what I have been saying for a long time: CT is overpriced and salaries are pathetic.

…if you can face the 2 hour trek to work every day, and even worse back every evening…what used to be “rush hour” is now constant traffic and gridlock.

You and Hilton actually live in the Northern Suburbs?

Houses in Durbanville do sell from time to time but increasingly slowly.

Agents phone me saying that there is strong demand for houses in our area BUT no real explanation as to why the existing stock not selling and that unsold stock getting bigger.

I wonder how keen foreign investors will be now that parliament has approved expropriation without compensation. While the EFF and the ANC will deny it, the fact of the matter is that the principle has been established and everyone’s home is up for grabs in the future.
Good luck trying to sell your property now!

Hm….African leaders often say “watch what happens to what is said”

The ANC are far from foolish. They know food security is paramount and dependency on food imports is not