As the UK mulls a possible exit from the European Union (EU), jitters have already gripped global markets.

The looming referendum vote in June to decide the fate of the UK in the EU has seen the sterling pound drop to seven year lows against the dollar.

The pound has tumbled to $1.39 against the dollar – levels last seen back in 2009 at the height of the global financial crisis. The pound also fell to €1.28 against the euro.

Not only have Brexit fears spooked currency markets, but property stocks, especially those heavily exposed to the UK market, have not been spared.

The share price of a bevy of UK-focused companies on the London Stock Exchange like shopping mall owner Hammerson, retail and office property owner British Land, mall owner Intu Properties, Capital & Counties (Capco) and others have seen a heavy sell-off in recent weeks.

In fact, latest figures from Momentum Asset Managers show that the UK’s listed property sector is now trading at a 21% discount to net asset value. See table below. 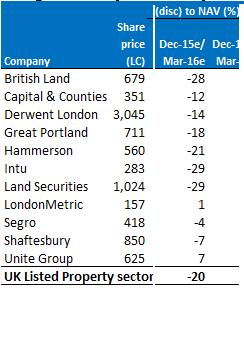 The head of property investments at Momentum Asset Management Nesi Chetty says the threat of a Brexit (UK’s exit from the EU) has been prevalent in recent weeks and impacted the prices of UK-listed property stocks.

The decline seen in London has also been mirrored on the JSE, as the sell-down of dual-listed counters, which are exposed to the UK, has been in full swing. The share price of UK-focused counters like Capco, Redefine International and Capital & Regional fell by more than 10% in the past 30 days.  See table below.

The devaluation of the pound over the past month is likely to exacerbate the decline of rand returns for income-chasing investors who have hedged their bets in UK-focused funds.

But SA investors have had a strong appetite for rand hedge stocks like Capo and Intu Properties, which continue to trade at premiums on the JSE, says Anderson.

Over the past four years, property punters have generally made more money offshore than in their own backyards. Investors have been spoilt for choice as more rand hedge property companies have listed on the local bourse. Ten years ago, SA’s listed property sector had no offshore exposure, but offshore earnings now make up 36% of the FTSE/JSE South African property index (Sapy).

Chetty anticipates that most offshore-focused property stocks will outperform SA-focused counters. He expects offshore stocks to deliver total returns of up to 15% (in hard currency) for 2016.

Brexit and the UK economy

So far, market watchers have warned that a Brexit would severely undermine the UK’s growth prospects.

The UK has emerged as one of the fastest regions to recover from the global financial crisis.  An exit from the EU would potentially lead to a diminished flow of capital and labour between Britain and the EU, which would negatively impact the demand for commercial and residential space, says Avior Capital Markets equity analyst Adrian Jardine.

Despite the political and economic pressures the UK faces, Avior Capital Markets still favours offshore property markets given the positive yield spreads (meaning yields on properties are higher than borrowing costs in most regions).

“In SA, this positive carry is now virtually non-existent (except in low-grade, high-risk assets) and in the context of a drastically stagnant economic and operating environment, the prospects for organic rental growth are not compelling,” says Jardine.

He favours Germany-focused Sirius Real Estate given its pipeline of business parks in the region; Redefine International, which currently offers an attractive forward yield in excess of 8%; and Intu Properties, which offers a compelling entry point at a 30% discount to net asset value. Jardine adds that the recent Capco sell-off is overdone, but he still finds value in the counter.

Although SA’s fundamentals are not attractive given the worrying state of the economy, asset managers are now discerning about finding value locally. Anderson favours smaller- and medium-sized property companies in SA that are trading on attractive initial income yields and offer inflation-beating income and earnings growth.

“If investors want value in listed property they should focus closer to home or buy their offshore property on foreign bourses where they’re not paying the ‘offshore exposure’ premium,” he says.

If Britons vote to stay in EU, pound would gain 4% soon after

‘Brexit’ outcome depends on how the don’t-knows vote, if at all

If Britons vote to stay in EU, pound would gain 4% soon after

‘Brexit’ outcome depends on how the don’t-knows vote, if at all