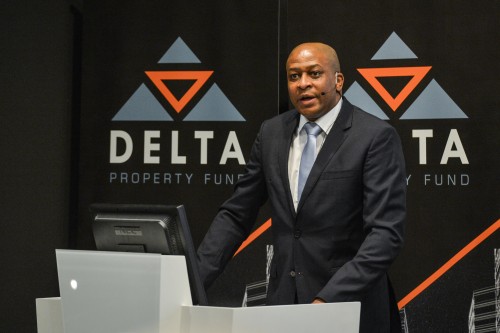 Delta Property Fund’s long-time CEO Sandile Nomvete, who founded the group over a decade ago and listed it on the JSE in 2012, has resigned with immediate effect.

Nomvete’s sudden resignation, together with that of the group’s CFO, Shaneel Maharaj, was announced in a JSE Sens statement on Monday.

Delta’s statement also noted that the group’s chief operations officer Otis Tshabalala, who resigned on July 2, has elected to not complete his notice period and will also be leaving with immediate effect.

The resignations effectively mean that the top three executives within the group are exiting at once, raising questions about the mass walkout.

Nomvete, who tried unsuccessfully to merge Delta with fellow black-empowered property fund Rebosis over the past year, did not respond to requests for comment on Monday.

Moneyweb however understands that his departure is linked to the group’s biggest single shareholder, Cornwall Crescent, deciding to “chart a new direction” for the group, which has lost over 94% of its market cap over the last three years.

Cornwall Crescent, the women-led BEE consortium that owns around a quarter of Delta’s shares, was against the proposed merger with Rebosis. The consortium secured its initial stake in Delta from Redefine Properties for just over R1.4 billion in 2017.

In the Sens statement, Delta advised shareholders that current non-executive director on the board, Bongi Masinga, has been appointed acting CEO.

“Bongi and Marelise between them have extensive corporate and listed property experience. The board has full confidence that they are best placed to ensure that Delta will continue to operate without any disruptions in its day-to-day operations,” the statement noted.

“The board will update shareholders on the appointment of suitable replacements for the above positions in due course,” it added.

Delta’s Sens statement made no further mentioned of Nomvete, despite his influential role in establishing the group. The company has however come under serious pressure over the last year, exacerbated by the economic impact of the Covid-19 pandemic on the listed property sector.

Its share price has plunged more than 60% over the last year alone, with Delta’s market capitalisation dwindling to just under R300 million.

The market, however, seemed to have taken the resignations positively, with Delta’s share price closing just over 7% up on Monday, at 44 cents.

Commenting on the changes, the head of Cornwall Crescent and Delta’s recently appointed non-executive deputy chairperson Phumzile Langeni said: “Cornwall Crescent, a black women’s empowerment consortium and one of the largest shareholders in Delta Property Fund, has for some time been engaging with shareholders of Delta on ways to best unlock growth in the company.” Langeni noted that the “proposed new way forward” for Delta “gained significant shareholder support” following recent changes to the group’s the board.

“Subsequently, the executive management team decided to step down… On behalf of the board, I would like to thank Sandile, Shaneel and Otis for the work they did in very difficult market circumstances, and we wish them well on their future endeavours,” she added in a statement.

Meanwhile, Delta’s current independent non-executive chairperson JB Magwaza, is set to retire from the group’s board at the end of August 2020.

Langeni, who holds several directorships in listed and unlisted companies and is also a member of President Cyril Ramaphosa’s special envoys on investment, is set to assume the Delta chairperson position upon Magwaza’s retirement.

Delta has come to mean the difference between the companies projections and its actuals.

There is only so far you can push the theme of race as a way of unlocking value.

What’s all that about?

Y’all better stop playing with my money. Just run the company and grow the value of the enterpise and thus investor return.

I can’t afford another REIT investment going the route of Visual and Freedom Properties.