Buried on slide 49 of the annual results of one of the country’s largest retail real estate investment trusts1 are the following four words: “Retail market reaching maturity”. This is one of the first admissions by a major participant in the sector that the market is increasingly saturated and South Africa simply doesn’t need much more retail space.

We have the sixth highest number of shopping centres in the world, according to 2015 research by the South African Chamber of Shopping Centres. At that point, there was under 2 000 of them covering over 23 million square metres.

Admittedly, Vukile Property Fund (the Reit reference above) tends to be active in the small regional (25 000m2-50 000m2) and community (12 000m2-25 000m2) shopping centre segments (68% of its portfolio, by market value). This is where much of the growth has been in recent years, with centres being built in townships and smaller towns in every corner of the country (as well as in whatever gaps there were as major metros continued to sprawl).

At the mega end of the market, commentators have been quite clear that Mall of Africa is likely the last super regional (>100 000 m2) shopping centre to be built in this country for a while. There’s simply no obvious need for yet another giant mall.

Trading densities (sales growth per square metre of space) are under pressure, with “regional, small regional and super regional segments… now some way off their three- and five-year average year-on-year growth rates” according to the South African Property Owners’ Association Retail trends report for the year to end 2016. The super regional segment actually showed a decline in trading densities of 1.2% year-on-year.

The (effective) failure of Stuttafords will affect vacancies across the sector, as well as likely knock earnings of those funds affected (as landlords). Hyprop CEO Pieter Prinsloo told the Financial Mail last week that “it is likely to take six months to negotiate lease agreements with new tenants and fit out new stores”. Hyprop-owned Canal Walk, Rosebank Mall, and Clearwater Mall are affected. And while there is demand from international retailers (like H&M, Zara and Cotton On) for space, this has moderated.

But retail is about more than just shopping centres. An analysis by Moneyweb of building statistics collected by StatsSA since 2000 reveals a clear trend. 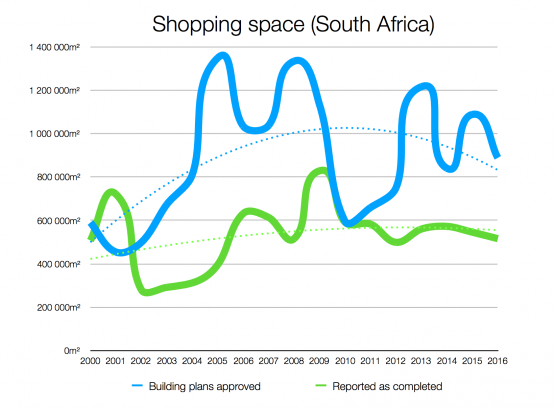 When looking at both building plans passed by municipalities across the country for ‘shopping’ and the amount of space actually reported as completed, it’s apparent that a peak has been reached.

There is obviously a lag between the approval of building plans and their completion. Additionally, there is no direct correlation between a plan being passed and it being completed (some planned developments simply do not happen and some are not reported as complete).

In 2016, preliminary data shows a decline of a full 200 000m2 of space planned – or 20% – when comparing it to the year prior. That’s almost two Mall of Africas! The data is lumpy (a huge project like that would’ve affected the national numbers in the year plans were passed), but one can clearly see the recession and its after-effects in 2010, 2011 and 2012. Based on space, plans approved in those years more than halved from the peaks in two of the five years prior. In that boom from 2005, over 1 million square metres of shopping space was approved per year.

Finally everyone is realising what we as ordinary consumers have been noticing, too many Malls in SA. In the short term listed property will start to take strain as vacancies rise and with consumer spending under pressure expect more retail outlets to be closed. In the next 5 years online shopping will start to take hold like it has in US & Europe leading to more store closures. SA needs to build light manufacturing industry and wean itself off credit fueled demand driven growth to a savings driven and light manufacturing growth.

The country’s local authorities should NOT have allowed these malls to get this big in the first place. It is discriminatory, collusion, anti-competitive, a distortion to the market and darn right irresponsible by the municipalities and the investors themselves.

Cities should never be designed around such monolithic atom bomb type retail structures in the first place.

A good urban form is about livability, accessibility, diversity and you do not get this with super-regional malls.

People suffer getting to them, parking in them, getting away from them and living next door to them.

Long may we suffer as a result.

I agree there are probably too many malls, but I’ve always understood that the need for such centralised shopping facilities in SA was largely dictated by the disgraceful crime situation here. Unlike shops in the streets, malls have security – not only that made doubtfully available by the formal mall security people, but also by the concentration of shoppers.

Part of the reason for malls’s decline is that, in terms of shops, they are clones of each other.
Anchor tenant, “safe” franchise brands,…like TV lowest common denominator stuff.

me thinks there are going to be quite a number of decaying malls in the near future if one has a look at world trend leader Usa.
this is due to the growth of online ordering ala Amazon which is gobbling up trading at a rapid rate.they have many ”ghost malls’.’
in the western world they seem to rejuvenate tatty real estate and make it very desirable- the same cannot be said for Africa if one has a look at our cbd’s which are going vrot and no matter how much hype is published about revivals they just keep getting even vrotter and are definitely not desirable except for thugs who hijack these buildings