Although it courts the interest of ultra-high net worth individuals.
Ray Mahlaka 15 May 2015  00:01 South Africa’s leisure property market has not amassed strong capital growth on properties over the years, but it may be rousing interest in value chasers.

The market is however facing a bevy of challenges for now.

House price growth has slowed from its relatively decent run in 2014 for this market, which is still viewed as a nice-to-have.

Figures from FNB’s holiday towns house price index indicates that for the first quarter of 2015 the market grew 2.1%, which is down for the third consecutive quarter.  The market cooled from the high of 3.3% recorded in the second quarter of 2014. At the time, this indicated a potential recovery of leisure properties following a five-year period (2009 to 2013) of zero capital growth and in some cases moderately priced properties in metropolitan areas trumping this market. See graph below: 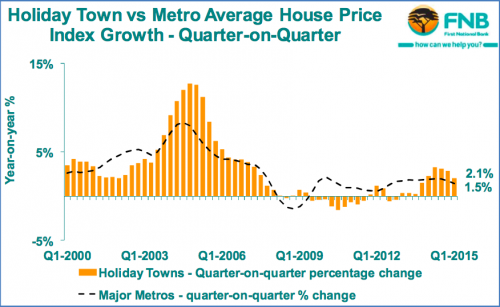 The market is still spooked from the start of the global credit crisis in 2007 which saw a slump in demand for leisure properties and mounting pressure on house price growth. The latter trend is evident, as house price growth declined from about 20% (year-on-year) in 2007 to 12.1% (2014: Q4), according to FNB. During the boom times of 2004, the market posted a 58% year-on-year growth. Household and property sector strategist John Loos says the decline in house price growth is a result of slowing economic growth and the prospect of rising interest rates.

“When times are good economically people want holiday homes. Last year [2014] the market made a comeback, but the market was still not pumping,” Loos told Moneyweb.

Economically, times are difficult and there’s a glut of leisure properties in the market, especially in coastal areas, says CEO of Jawitz Properties Herschel Jawitz. Compounding this, banks are becoming more discerning on approving loans. “Bank lending on secondary properties is still very tight as they are taking a conservative view on borrowing on these properties,” Jawitz adds.

Despite the pressures in the market, industry players note that the market is starting to court the attention of cash-flush buyers. Chairman of Seeff Property Services Samuel Seeff says over the last year traditional leisure property suburbs like Western Cape’s Plettenberg Bay, Clifton, Bantry Bay and Knysna have “seen a sharp increase.” Properties in these areas can range from R1 million to R160 million.  Seeff says KwaZulu-Natal’s upper coastal suburbs like Ballito and Umhlanga are also seeing renewed interest.

The rapid growth of ultra-high net worth individuals (UHNWI) – who own at least $30 million (R354 million) in assets – over the next ten years will have a positive spin-off for Africa’s luxury residential property sector, according to the recent Knight Frank’s 2015 Wealth Report. South Africa will have a share of investments into the leisure property market, as investors search for trophy homes.

Just on the performance of luxury properties, Editor of the Wealth Report Andrew Shirley, says global properties showed flat growth of 2%, while African properties have showed a “respectable” growth rate of 6.5%. Shirley says South Africa has shown strong performance due to the weak rand, making the country’s property attractive among investors.

South Africa has received a vote of confidence, as it is the only African country to feature in Knight Frank’s top 40 most important cities for UHNWI. Cape Town has clinched the 36th spot eclipsing Tel Aviv, Auckland, Buenos Aires and Rio de Janeiro.

However, the sign that buyers are returning to the leisure property market is strongly undermined by the market’s tepid outlook. Loos expects house price growth to slow to single digit rates “in the not too distant future.”