Property counter blames poor results on receiving no dividends from its offshore investments in Poland and the UK.
By Suren Naidoo 4 May 2020  21:25 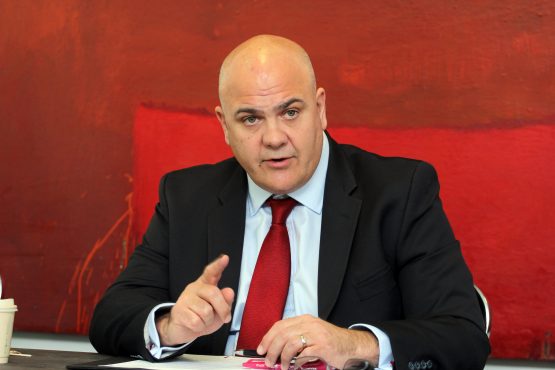 Andrew Konig, CEO of Redefine Properties, expects a “tale of two halves” for its 2020 financial year, with the second half likely to be even tougher due to the economic impact of Covid-19. Image: Moneyweb

JSE-listed property giant Redefine posted a 32% decline in distributable income per share on Monday for its half-year ending February 29, 2020, which saw its share price slide 10.13% at the market’s close.

In line with a Sens statement issued on March 23, the group declared no dividend for the interim period, opting to defer a decision on dividend payments to the end of its financial year. It also withdrew its guidance for the year.

Distributions or dividends per share (DPS) is a key metric by which a Reit’s financial performance is measured. However, due to unprecedented uncertainty around the Covid-19 pandemic and lockdown, Redefine has opted to retain interim dividends to bolster its balance sheet. Most of its property sector peers have made similar moves and have also withdrawn DPS guidance forecasts for 2020.

Redefine CEO Andrew Konig blamed the 32% decline in distributable income per share largely on the fact that the group’s offshore investments – EPP in Poland and Redefine International (RDI) in the UK – did not pay-out dividends due to Covid-19 uncertainty.

“This would have still been in-line with our revised guidance, issued during our pre-close presentation in February, that distributable income per share for the 2020 financial year was expected to be between 5% to 7% lower,” he said.

“However, there was no indication at the time of the kind of impact Covid-19 would have. The economic environment has significantly changed since then, and in March following the announcement of the lockdown, Redefine withdrew its guidance for the year,” he added.

Konig noted that Redefine expects a “tale of two halves” for its 2020 financial year, with the second half (to the end of August) likely to be even tougher, due to the Covid-19 economic impact.

“Given the unprecedented and fluid market conditions, property fundamentals both domestically and globally, are going to be challenged for the rest of 2020 and beyond,” he said.

“We are making decisions and adapting to new rules in an environment where the knowns are outweighed by evolving unknowns…. We cannot provide distribution guidance yet due to this evolving, fluid and dynamic situation,” he added.

Konig said while Redefine has collected more than 74% of its rental (for its entire portfolio) due for April, rentals for May and June are expected to be impacted. He noted that retail tenants such as sit-down restaurants and cinemas, which are still not allowed to operate, will be among the worst affected, which will impact rental payments.

Meanwhile, Konig said that rental negotiations with major clothing retailers, related to the lockdown period, are still ongoing through the Property Industry Group initiative. He said that actual rentals are no longer the major “sticking point” – negotiations around the retailers paying for municipal charges are.

Reacting to Redefine’s interim results, Nesi Chetty, senior listed property fund manager at Stanlib, commented: “The group’s results were very weak for the reported period. There is less of a focus on distributable income in the short term given the current lockdown and uncertainty around the Covid-19 pandemic.”

Chetty raised concerns around Redefine’s high loan-to-value (LTV) at the end of its interim period. “With its LTV at around 44%, management has come short in not being able to bring this down,” he said.

“One would expect that disposals [to bring down its LTV] in this market will be very tough, but there is some confidence they can get some of their offshore asset sales away…. However, RDI at these levels is probably too cheap to sell,” he noted.

The system whereby in good times companies pay massive bonuses and dividends but when tough times arrive they go austere on workers and re-price the hired help’s incentive scheme (or pay fines for the former hired help’s illegal actions from shareholder funds) must stop.

Bit off topic but think of resource companies. When price is good the workers get R1000 and the better half live like kings. When prices are bad workers get retrenched, shareholders forego Div but management are always comfortable

No I am not a Comrade

Well said. We also need a system where employees and management are not incentives through share options.

That system is called prudent long term risk management, but many SA REITs are run by short-termistic investment bankers / gangsters, and they used to be only measured on distributions rather than quality / sustainability of cashflows. It is impossible to pay out 100% of net operating profits without resorting to debt / DRIPS to fund necessary maintenance, refurbishments and tenant installations. Despite this, almost every SA REIT thought it was OK to define distributable income without any allowance for these ongoing costs.

Well put Johan. Thank you for sharing. You’re absolutely right! And same for the country. That’s why the new Sovereign Wealth fund will help South Africa in the long term.

A 32% decline in income, 74% collection rate of rental in April(likely to decrease) with 40% + gearing…covenants and reit status must be making them sweat..

No wonder the share price is where it is

Just like Hammerson in the UK and all their European assets not paying dividends.